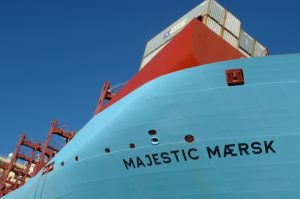 Among the first visitors to marvel at one of the world’s largest ships when she docked at the Langelinie Quay for a seven-day stay in Copenhagen were businessmen and women recently signed up for the two-year Executive MBA in Shipping & Logistics (the Blue MBA).

The second in the Triple-E series, the ship was while in port named Majestic Maersk by Mary Elizabeth, Her Royal Highness Crown Princess of Denmark. The 400 m long vessel had arrived from Gdansk, and was making a detour from the Asia-Europe service for which her schedule includes calls at 14 ports.

The Blue MBA is a part-time course under the auspices of Copenhagen Business School which seeks to give the rising generation of industry leaders a thorough grounding in maritime business strategy, finance and practical application of knowledge, guided by top-level tutors and guest lecturers. 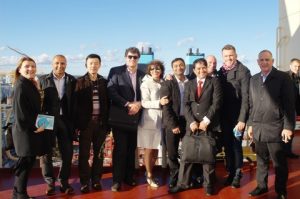 The delegation from the Blue MBA, including program director Irene Rosberg, (fifth from the left) onboard the triple-E

The delegation from the Blue MBA, including program director Irene Rosberg, heard that the 18, 000-teu ship is claimed to be the most environmentally improved. Maersk Line says that the innovative design sets new standards for re-use of materials and reduction of CO2 emissions by more than 50% per container moved compared to industry average CO2 performance on the Asia-Europe trade. In all, Maersk has ordered 20 such mega-ships.

Blue MBA participants were fascinated by a parallel shore-side exhibition which included a simulator attuned to the vessel’s characteristics, and displays about the life of seafarers and the role of container shipping in world trade.

Chris John Jephson, who has had more than 40 years’ association with Maersk Line and is co-author of a book shortly to be published tracing the company’s voyage of expansion to become the dominant force in containerised ocean transport, accompanied the Blue MBA group.  He said: “Shipping and logistics is very much about hard assets and information. What better way to start the Blue MBA program than by visiting one of the world’s largest container ships on her maiden voyage and the major exhibition on the role of the container in facilitating global trade.”

Blue MBA participants were later asked their views as to how much the advent of the Triple-E series was a step forward towards environmentally conscious ship construction; and whether it was an inspiration for other ship operators to build better vessels.

“Others are of course looking at what Maersk Line is doing, ” said Mr Michelsen, “and there seems to be an increased appetite for new ships at the moment, so we will for sure see a lot of new energy-friendly ships on the high seas, within the next couple of years.”

Christian Berg, chief executive of Viking Supply Ships A/S, Denmark, said: “The Triple-E is an improved design with more fuel efficient engines, but compared to the innovation we have seen in the offshore supply market, it is by no means a revolution.

“Other owners will build vessels at same size or larger in order to compete on equal or better terms.”

As to whether this is an inspiration for other ship operators to build better vessels, Mr Banas commented: “It is an interesting game played. Bigger is better.  I believe all of the players will have bigger vessels. Only physical restrictions in port will limit how far we will go.”

Kenneth Bruhn Christensen, managing Director of DSV Air & Sea, Malaysia, said: “This is not exactly my expertise as I am not from the shipowner/ship operator side. But my take on the Triple-E is that it is certainly a showpiece in engineering but also in sustainability. Partly because of the engineering feats, but also with the cradle-to-cradle passport which is a first in the industry.

“No doubt that Maersk has led the way with this innovation, and I think this does set an example for the industry to follow. But apart from this leadership, the general expectations from society as a whole and from customers specifically will push the shipowners to make sustainability a priority. This will at least be the case for container shipping”

Mr Christensen added: “My personal experience is that our customers push us to drive a green agenda, and that we naturally extend to our partners and suppliers including the shipping lines.”

Ulla Eithz Nielsen, director for corporate social responsibility at Dampskibsselskabet Norden A/S, Denmark, said of the Majestic Maersk: “Impressive that she actually is almost same size as the Emma Class in length and width and due to the very different hull shape and forward positioning of the accommodation, she is able to carry approx 7, 000 teus more in capacity.”

“Furthermore, the cradle-to-cradle passport is for sure a very interesting topic in terms of being sustainable, ” observed Ms Nielsen.