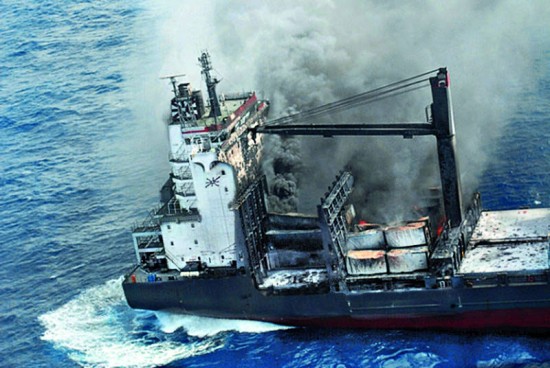 Brussels, 3 October 2013 – The NGO Shipbreaking Platform and its 18 member organisations are calling on India, Pakistan, and Bangladesh to halt the import of the damaged, presumably toxic ship Hansa Brandenburg. It is suspected that the German owner, the Leonhardt & Blumberg group, has sold the Hansa Brandenburg for breaking in South Asia, most likely to India. The container ship caught fire in July and was later towed to Port-Louis in Mauritius.

The Mauritian authorities dealing with hazardous waste confirmed that the ship is still in Port-Louis, but could soon leave as Mauritius refused to deal with the burnt containers and cargo which, in all likelihood, contain a substantial amount of hazardous materials such as heavy metals or PCBs. Moreover, the vessel is suspected to carry dangerous substances in fire fighting water as well as a significant amount of fuels and oil. Therefore, the NGO Shipbreaking Platform is concerned that the Hansa Brandenburg, which was not cleaned after the fire on board, is contaminated with hazardous substances.

Last year, another German-owned container ship, the MSC Flaminia, caught fire and was severely damaged. The owner of the ship had to clean it in a German port and then sent it for repair within the EU. The NGO Shipbreaking Platform calls on Leonhardt & Blumberg to make sure that toxic residues left by the fire as well as the hazardous substances in the structure of the ship are taken care of in a facility that is adequately equipped for the task. The costs for such an operation must be paid by those responsible, not by the workers and the environment on a beach.

“If the ‘Hansa Brandenburg’ is sent to India, this would be another typical case of bad practice where a wealthy shipping company rids itself of its environmental and social responsibility by dumping waste in a substandard yard in South Asia – just because it is more profitable, ” said Patrizia Heidegger, Executive Director of the NGO Shipbreaking Platform.

Based in Hamburg, the Leonhardt & Blumberg group is already known for its malpractice to dump old ships in substandard facilities in India: in 2012, the Hansa India was beached in Alang, India, followed in 2013 by the Hansa Trondheim, the Hansa Stavanger, the Hansa Pacific and the Hansa Atlantic. This year, Leonhardt & Blumberg changed the flags of all its beached end-of-life vessels to Sierra Leone or Comoros before beaching – a typical sign that the owner used a cash buyer as a middle man and seeks to avoid any legal responsibility.

Leonhardt & Blumberg had promised the German Government that at least part of its fleet would again fly the German flag in return for tax incentives under the tonnage tax system. Frank Leonhardt, who co-owns Leonhardt & Blumberg, is the former president of the German Ship Owners Association, a lobbying group representing the shipping industry’s interests. However, currently only one of their ships flies a German flag. Reflagging to flags of convenience allows shipowners to circumvent stricter law in Europe, for instance with regards to workers’ rights or environmental protection. Under the new European Regulation on Ship Recycling, which will enter into force early in 2014, ships flying the flag of an EU Member State can only be dismantled in a ship recycling facility approved by the European Commission in order to ensure workers’ safety and environmentally sound management of hazardous wastes. If Leonhardt & Blumberg continue to re-flag their vessels to Sierra Leone or the Comoros before scrapping, they will deliberately avoid the new regulation.

With about 4, 000 merchant ships, Germany owns the world’s biggest commercial shipping fleet. It is also one of the worst dumpers of toxic ships: in 2012, 58 German-owned ships were beached in South Asia, and another 34 have already been sent between January and June 2013. Last year, 365 end-of-life ships owned by European companies were dumped in South Asia.

“We are not the dumping ground for the toxic vessels of the ship-owning countries, ” said Ritwick Dutta, environmental lawyer at the Indian NGO Legal Initiative for Forest and Environment (LIFE). “The Indian authorities must halt the import of the ‘Hansa Brandenburg’ and make sure our workers and our environment are not exposed to toxic substances which cannot be treated adequately.”

The beaches of South Asia are the final destination for 70% of the world’s end-of-life vessels. Hazardous materials cannot be safely removed from end-of-life ships by untrained workers exposed to one of the most dangerous jobs in the world. Hazardous waste such as asbestos, PCBs, TBTs, heavy metals and oil residues are often not identified correctly and may even be resold on the local market or dumped into the environment without proper care. Lack of training and awareness leave shipbreaking workers – especially in Bangladesh where child labour takes place – exposed to the inhalation of toxic fumes that can lead to severe diseases, including cancer. Accidents are frequent in the yards: in 2012, the NGO Shipbreaking Platform recorded 40 deaths in the shipbreaking yards in South Asia, although the restricted access to information may hide more victims and the long-term effects of occupational diseases are not recorded.