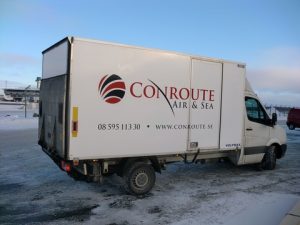 The sharks were shipped by airfreight from Ngurah Rai International Airport on Bali Island, Indonesia and were destined for Haga Ocean, a tropical rain forest and aquarium in Hagaparken, Stockholm.

Whilst Conroute Air & Sea was not involved in the actual freight movement, it is well know to aquarium owners in Sweden and is often asked to help with customs matters and documentation when the animals arrive into Sweden.

Joakim Hagman, Conroute Air & Sea, owner says: “Niche services such as these help us to differentiate our company from our general freight forwarding competition in Sweden. It was a privilege to be able to help one of Sweden’s leading tourist attractions, just before it opened a new aquarium.”

Conroute Air & Sea is one of Sweden’s foremost independent logistics companies and the long-time exclusive Swedish agent of the worldwide U-Freight Group (UFL).