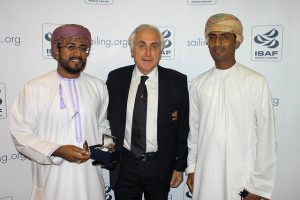 Saturday 16 November 2013 – The International Association for Disabled Sailing (IFDS) and International Sailing Federation (ISAF) have both unanimously agreed to merge as the 2013 ISAF Annual Conference drew to a close in Muscat, Sultanate of Oman.

The merger will create a single governing body for MNAs and sailors to better serve the needs and interests of sailors with disabilities.

On the decision IFDS President John Twomey said, “We are delighted that both IFDS and ISAF unanimously agreed to form a merger.

“At the IFDS Annual General Meeting our members gave full support and I was delighted to see the same from ISAF Council.

“The round of applause received from ISAF Council and was incredibly touching and now the work can begin to align IFDS and ISAF, it’s one we look forward to implementing.”

As a single governing body the merger will be able to provide consistency within the sport, from relationships with the World Anti-Doping Agency (WADA) to technical support and operational efficiencies.

The expertise and specialisms of IFDS will be retained with a new IFDS Committee included in the ISAF Annual Conference schedule. The IFDS Chairman shall have a full voting seat on the ISAF Council.

In terms of racing, the Paralympic fleet will continue to be included in the ISAF Sailing World Cup with entries currently being welcomed for Melbourne and Miami.

IFDS will retain responsibility for the Paralympic Sailing Competition, including event and equipment selection as well as the IFDS World Championships.

The processes that will enable the merger, including all the necessary structural and regulation changes, will be completed by November 2014.

2013 ISAF Annual Conference Draws To A Close In Muscat, Sultanate of Oman

Financial institutions moving away from ‘green’ classifications, and...