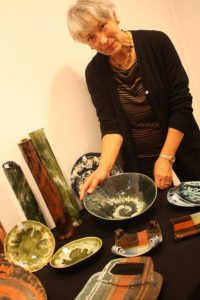 Ann Saunders is inspired by the seashore.

Thirteen ceramicists from a group named Hot Pots pitched in with brio to their latest London show which burnished their reputation for innovation and thoughtful design.

Entitled Pitcher and Pot – Diversity in Studio Ceramics, the show has been running from November 14 to 17 2013, at the MP Birla Millennium Art Gallery, part of the Bhavan Centre in west London.

While they have a common bond in attending workshops and using facilities at King Charles Centre, Surbiton, members of the group have clear individual styles.  Some are associated with London Potters, whose annual exhibition, recently reviewed on this site, is also attracting favourable reviews.

They have in common too the great assurance with which they model their material, moulding a treasure house of artworks from the simple element of earth. 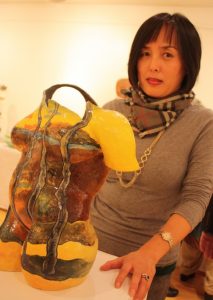 Sarah Choi with her work Torso.

Sarah Choi, who has a South Korean background, fashions architectural scenes and religious motifs into the surface of idiosyncratic receptacles. What she draws – sometimes with iron oxide pencils –and paints on her hand-built items reflects her growing interest in 3-D concepts and above all her interest in a Christian message of love, helping, sharing and joyful living together.

Sarah has a distinct talent for applying the under-glaze paint to her slip clasts (production based on moulds). A vessel, she says, can in this context have the dual purpose in being a container for tangible objects and one that evokes spiritual qualities. She produced what was perhaps the most dramatic work in the show, entitled Torso, using a clear glaze. 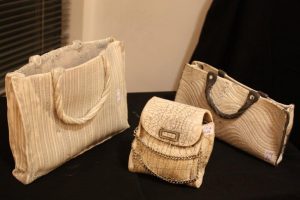 Ann Saunders is another artist who has prioritised hand over wheel in pottery, producing colourfully coated pieces which she says, reflect the way the sea breaks on the seashore, a phenomenon which prompted her to develop experiments with many glazes. If much of her work takes on the consistency of fabrics, that is easily explained: clay readily picks up the texture of a piece of cloth – and she has been making use of old damask curtains to produce the desired, and desirable, effect. 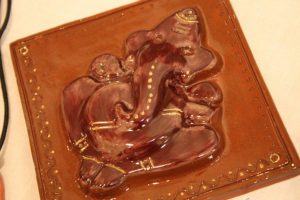 South Indian-born Shanti Venkatesh continues to turn out decorative vases with flowing indent patterning the fault lines that grace the Grand Canyon National Park in the US, and a variety of other objects as she plays with colours and texture. Some of her latest work reflects the bark of trees of more temperate climates. A bust of Ganesh, the elephant-headed god of wisdom and success, was produced from a mould, biscuit fired, glaze fired and lustre fired for a finish with touches of gold. Shanti is another enthusiast for hand-building, texturing soft nuances with her fingers. 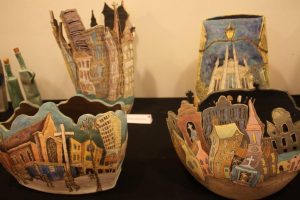 The show was designated as an KV Radhakrishnan Memorial Exhibition, in honour of the Bhavan’s first visual arts committee chairman. 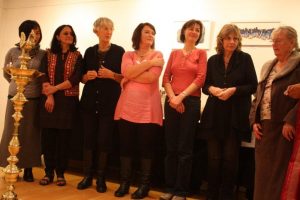 Some of the artists at the opening ceremony

Opening the event was the visiting Chennai-based Bharatanatyam dancer and choreographer Alarmél Valli. Ms Valli is at the top of Indian classical interpretation, and her dance has been described as  “uncompromisingly classical, but, at the same time, an undeniable language of self-expression.” Ms Valli is a foremost exponent of the Pandanallur style of Bharatanatyam and has won many international awards. After the opening ceremony, she delivered an MP Birla Memorial Lecture entitled Past Forward – My Journey through Dance, in which she stressed the importance of dancers retaining integrity of performance and developing their own styles.

The Bhavan Centre UK, Institute of Indian Art and Culture, is at 4A Castletown Road, West Kensington, London W14. www.bhavan.net

Nick Gooding to take on IMO role for IUMI

Will this be Monaco’s first green unicorn?

Propeller Club lunch* at The Athenaeum in Liverpool