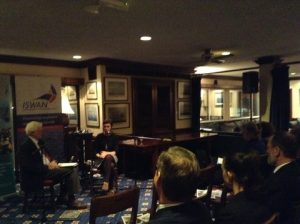 On a cold winter’s evening, the shipping world turned out in force to listen to Michael Grey MBE, former Editor of Lloyd’s List, in conversation with British journalist and author Rose George. They were discussing her well-received book, ‘Deep Sea and Foreign Going’ which chronicles her journey from Felixstowe to Singapore on a container ship, the Maersk Kendal, in 2010. 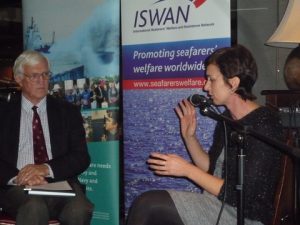 The event was organised by the International Seafarers’ Welfare and Assistance Network (ISWAN) with the support of Seafarers UK, and sponsored by Headland Media.

Per Gullestrup, the new Chairman of ISWAN began by welcoming everyone and giving a brief outline of the work of ISWAN. He was followed by Sue Henney, Marketing of Marketing at Headland Media who spoke about the company and its pleasure at sponsoring the event.  On a personal note, Sue said that Roses’s contribution was “absolutely invaluable”.

Michael then opened the conversation by asking Rose the question that was on most people’s lips, ‘”What drew you to shipping as a writer?” 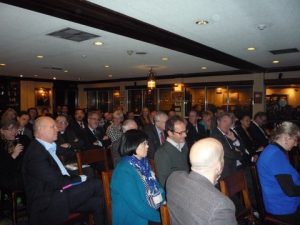 a full house on board the President

With no background in shipping and not even eating fish, Rose was persuaded by a friend, the author Simon Winchester, to take a trip on a cargo ship.  So in the winter of 1999 she joined the Canmar Pride on its ten day journey from the Medway to Montreal.  She was fascinated by the fact that 22 people were living in such close proximity, relentlessly and yet were surrounded by the immensity of the ocean and its wildness. She found the whole experience unforgettable.

Then, after writing her second book, ‘The Big Necessity’, she wanted to do another book and had to think of something that would captivate her as a subject.  She did some research and discovered that Maersk was the biggest container line in the world, so approached them and, after 4 months of asking, they said yes!

Michael then referred to the issue of ‘sea blindness’ which Rose talks about in the introduction to her book. Rose said this is the way we all treat the sea as “something you fly over” and that “people don’t care where stuff comes from, as long as it turns up.” Michael wondered if this was partly the fault of shipping in not wanting people to look too closely at the industry? Rose felt there was some truth in this as she has sat in meetings with executives bemoaning the fact that the industry is misunderstood, but who are reticent to campaign to increase the profile – citing costs as the reason for inaction.

The conversation then moved onto more in depth discussion of Rose’s time onboard the Maersk Kendal. Michael commented on how Rose had managed to portray the bleakness and utilitarian nature of life onboard for seafarers. Rose pointed out that the Kendal was a very good ship – only 4 years old and in terms of welfare and budget it wasn’t too bad – but what was missing was some kind of cohesion and effort to create the warmth of everyday life. Mealtimes were simply a refuelling exercise; there was no attempt at conviviality or conversation.  The fact that all Maersk ships are ‘dry’ could be a contributory factor in the lack of sociability and both Michael and Rose felt that this failed to treat crewmembers as adults.  Rose felt what was lacking was the acknowledgement and appreciation that welfare involves making sure that people come together.

The multi-lingual nature of the ship’s crew also acted as a barrier to engagement – amongst a crew of 23 there were 9 different languages represented; and this is representative of the shipping industry today.

Rose found that, initially, the crew viewed her as a problem.  Fortunately, when they stopped at Rotterdam a new Captain came on board and Captain Glenn’s welcome to Rose of “Enjoy your meal, enjoy my ship” was music to her ears!

Rose’s book beautifully conveys the boredom, relentlessness, loneliness and exhaustion of life at sea. Subsequent criticism of the book has been that “nothing happened” whilst she was onboard – but this is the reality.

Interestingly, when Michael asked her if she would go back to sea, Rose said “Yes, tomorrow!”

The book is a fascinating mix of travelogue, history, anecdotes, statistics and character. It is essential reading for anyone curious about the complex systems behind our convenient modern world.

The audience were appreciative that her book has reached out beyond the world of shipping, and has helped to highlight the living and working conditions for seafarers.

The evening was brought to a close by a touching gesture from Captain Kuba Szymanski, Secretary General of Intermanager, who presented Rose with a bouquet and said that the book had exceeded his expectations.  In a room full of people – everyone was listening.  Seafarers couldn’t raise awareness as much as she has and for this they are grateful.

Seafarers UK for nearly 100 years has been meeting the welfare needs of the maritime community throughout the United Kingdom and Commonwealth. Its key aims are to improve the quality of life for seafarers and their families in times of need.  They do this through giving grants to charities and groups, which provide specialist, long term welfare services.

Headland Media is an international media company, providing entertainment, news and training to millions of guests, customers and employees every day. They  have 60 years’ experience in providing versatile, cost-effective services and have long been a trusted supplier to a wide range of sectors.