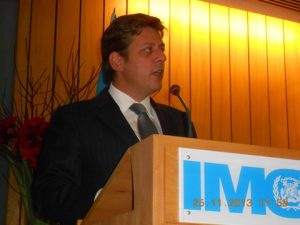 The address by Greece’s Minister of Shipping, Maritime Affairs and the Aegean Mr Miltiadis Varvitsiotis earlier todayon the occasion of the 28th IMO Assembly’s  opening session:

Mr Secretary General,
Mr President of the Assembly,
Honourable Ministers,
Your Excellencies,
Distinguished Delegates,
Ladies and Gentlemen,
It is a great honour and privilege for me to address all of you distinguished participants of the 28th session of the IMO Assembly, at which we have gathered to make important decisions for the future work of this vital for shipping international organization.
As the Hellenic Minister for Shipping, Maritime Affairs and the Aegean, I am very proud to represent a country with a great tradition in shipping, which counts today as one of the world’s largest shipping nations, with one of the biggest merchant fleets in the world.
For Greece shipping represents one of most important sectors of the economy.
Although my country has been severiously hit from the economic crisis, shipping sector maintained its health and international presence. Now Greek economy is returning back to stability.

Nobody talks about Grexit anymore! Everybody agrees that Greece is an integral part of the Eurozone. And instead of Grexit, most people now talk about Grecovery, the recovery expected to start early next year, after six consecutive years of recession. What’s more, Greece has stabilized internally, both economically and politically.

In the last 17 months we have reversed the trend. We have cut our deficit by 15 percent of our GDP in just three years! We are currently producing a primary surplus for the first time in about 10 years! Our mid-year reassessment of the 2013 recession is smaller than predicted by the IMF and the European commission. The second semester of 2013 unemployment level is for the first time less than the previous semester, for the first time in four years. Our banking system is fully recapitalized. Recovery is predicted almost unanimously for 2014, interrupting six consecutive years of deep recession.

Starting next January, Greece will assume the six-month presidency of the union. 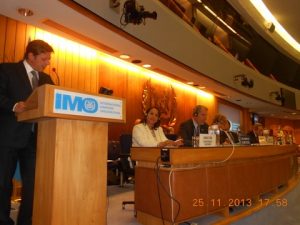 Miltiades J. Varvitsiotes at the podium and the Assembly’s members panel

As the president of the European Council, I will try to move forward the pending issues and finalize the directives that have been discussed. But mainly, we will try to increase the level of cooperation between IMO and EU. Greece and I personally believe that shipping should be internationally regulated by IMO. We don’t believe in regional policies that do not provide uniformity in the rules regulating shipping.

In addition, Greece particularly welcomes the progress made with regard to the further development of the IMO Member State Audit Scheme, bearing in mind that any law or international convention becomes void without proper implementation.
Greek shipping plays a leading role in international shipping since it makes up 15% of the world shipping and 40% of the European it reperesents.

The Greek shipping cluster is a uniquely successful bright spot in the Greek economy. As many as 1.347 shipping companies are currently active in Greece, while the core of the cluster is composed of around 800 ship operators, mainly established around the port of Piraeus.

Environmental issues
Greece has consistently supported the view that a holistic approach is needed to address safety and environmental issues. To be successful, such an approach should balance between technology, the need to encourage innovation, and the economics of world trade, as well as the actual operational parameters, practices and possibilities of shipping. IMO measures should be global and cost effective as possible. 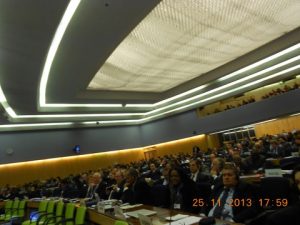 With regard to environmental matters, the new concept of sustainability of the shipping industry that leads to a new generation of environmentally friendly, energy efficient ships will shape the future. In this respect, Greece welcomes the entry into force of the energy efficiency regulations and the recent agreement to reschedule the BWM Convention implementation dates.
I would also like to place emphasis on the further development of the IMO Mandatory Code for ships operating in polar waters. It is crucial that any measures related to Arctic shipping are adopted within IMO.

Piracy and armed robbery
Greece is gravely concerned about the growing threat of piracy and armed robbery in the West African region. We have taken the initiative to propose to the Council the adoption of a Resolution addressing the problem of armed robbery against ships in the Western African region, following the established practice of previous cases in order to demonstrate IMO’s constant determination to confront the problem of piracy in all marine areas.

Ladies and Gentlemen,
My country has a strong commitment to the objectives and ideals of IMO. We would like to thank and support the Secretary General Mr Kozi Sekimizu for his commitment to reform the Organisation and we look forward to work along with our partners as Member of the Council for the next biennium. I truly believe that the successful conclusion of the 28th session of the Assembly will send a strong and positive message of IMO’s successes in the achievement of its goals.