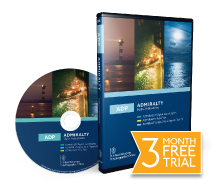 Bringing simplicity, flexibility and speed to passage planning and navigation

The United Kingdom Hydrographic Office has launched its latest edition of ADMIRALTY Digital Publications (ADP), Version 14. Free as an upgrade to existing users and available as a 3 month free trial to new customers, ADP v14 will provide onboard navigation teams with an array of new features that will help them to plan their voyages in a safe and efficient fashion by arming them with new content and greater ease-of-use, plus integration with the ADMIRALTY e-Navigator back-of-bridge software solution. And with 75% of the world’s fleet of vessels over 2, 000 gross tonnes now approved to use digital publications in place of their paper equivalent, for the majority it also aids compliance.

The new and improved features available in ADP v14 include the ability to view ADP in ADMIRALTY e-Navigator’s Planning Station, the leading back-of-bridge software solution that is used by onboard navigation teams for voyage planning, chart management. ADP v14 can be displayed over ADMIRALTY Vector Charts Service (AVCS) or ADMIRALTY Raster Charts Service (ARCS) data within e-Navigator to help with voyage planning.

Hugh Phillips, Head of Product Management, United Kingdom Hydrographic Office, said: “The UKHO has continued to invest in the development of ADMIRALTY Nautical Products and Services in order to provide the seafarer with the very latest benefits of a digital format, including additional functionality and data, presented in an easy-to-read and easy-to-use format. What is more, integration of ADP v14 with e-Navigator and AVCS means that it becomes a really powerful tool for voyage planning”.

Accompanying the launch of ADP v14 is the news that Iceland has become the latest Flag State to formally grant its approval for the carriage of digital nautical publications in lieu of paper. This means that all Icelandic-flagged vessels can now carry ADP instead of their paper equivalents in order to comply with SOLAS carriage requirements. In total, 70 flag states have now approved the use of digital publications, covering more than 75% of the world’s fleet of vessels over 2, 000 gross tonnes.

Full details and supporting documentation from the flag states that have given their approval for ADP can be found at <<http://www.ukho.gov.uk/ProductsandServices/DigitalPublications/Pages/ADLL.aspx>>
ADP v14 also includes improved licensing that will allow the user to activate their product via the internet.

A range of improvements have also been made to the individual publications that make up ADP. ADMIRALTY Digital List of Lights now includes improved WYSIWYG (What You See Is What You Get) diagrams, easy identification of lights with a range of 10 metres or greater, and improved ‘View From Here’ functionality. Meanwhile, the latest version of ADMIRALTY Digital Radio Signals Volume 6 has been simplified and enhanced to include the addition of LPS, Pilot Area, Port Area, Reporting Area & VTS Area polygons.

Existing users are encouraged to install the new ADP v14 CD as soon as possible. Support for all previous versions of ADP will continue until 28 May 2014, by which time all end users must have upgraded to ADP v14 in order to receive further updates. The new ADP v14 CD will automatically uninstall the previous edition, auto-install the new edition and work with existing licence keys to ensure that – where the Flag State Authority has authorised ADP to meet carriage requirements for nautical publications – SOLAS regulated vessels remain compliant with the carriage of nautical publications.

All enquiries should be directed to an ADMIRALTY Chart Agent.

1. UKHO, an Executive Agency of the Ministry of Defence, has been charting the world’s oceans for more than 200 years with the primary aim of providing navigational products and services for the Royal Navy and merchant mariners to save and protect lives at sea. In addition it serves small craft and leisure mariners and provides a range of consultancy services.

2. UKHO also plays a central role, in support of the Maritime and Coastguard Agency, in discharging the navigation element of the UK’s Safety of Life at Sea Treaty obligations for waters of UK national responsibility.

3. UKHO produces a worldwide series of some 3, 500 paper nautical charts, 200 publications under the ADMIRALTY brand and Electronic Navigational Charts (ENCs). The ADMIRALTY portfolio is sold globally and used by nearly 70% of international shipping.

Klaipeda: Port of the month!