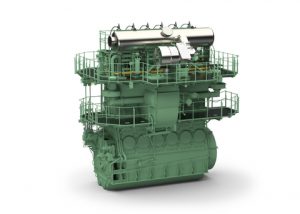 Wärtsilä, the marine industry’s leading provider of innovative products, solutions and services, has announced that its new 2-stroke, low pressure, dual-fuel engine has been selected by Terntank Rederi A/S, the Denmark based tanker operator, to power two new environmentally advanced, 15, 000 DWT tankers. These will be the first installations of this engine.

The new Wärtsilä technology was just recently introduced at a customer event held at the company’s Trieste, Italy facilities on November 12. The first engine utilising this technology is the Wärtsilä RT-flex50DF.

The significance of the availability of low pressure, dual-fuel engine technology for 2-stroke engines is that it provides notable economic and environmental advantages over other technologies. The new engine is IMO Tier III emissions compliant in gas mode without need of NOx abatement equipment.

The engine will provide capital expenditure (CAPEX) savings of between 15 and 20 per cent compared to other 2-stroke gas engine technologies currently on the market. This is possible thanks to the fact that no exhaust gas cleaning systems are needed and that the LNG and gas handling system is substantially simpler and of lower cost since only low pressure gas compression is required.

Another key benefit is that the Wärtsilä technology allows stable operation on gas across the entire load range, meaning that at low loads, there is no need to switch to diesel.

The selection of the Wärtsilä RT-flex50DF engine is a central feature of Terntank’s ‘Into the future – Baltic SO2lution’ project, which is in response to the European Commission’s TEN-T call 2013 whereby “Motorways of the sea actions” are identified to promote the sustainability and safety of transport, and to improve either existing or new maritime links. The project supports the development of more environmentally sustainable and energy efficient shipping in the Baltic Sea region, and the building of an LNG infrastructure. Since the Baltic Sea is a designated Emissions Control Area (ECA), the use of LNG as fuel is seen as being an effective means of attaining cost-efficient regulatory compliance.

When operating in gas mode, nitrogen oxide (NOx) emissions from the Wärtsilä RT-flex50DF engine are at least 85 percent below those specified in the current IMO regulations. CO2 emissions are some 25 percent less than those of a conventional marine engine running on diesel fuel, while the sulphur oxide (SOx) and particle emissions are negligible at almost zero percent.

“These newbuild tankers will be among the world’s most environmentally sustainable ships, and we are very proud of this. With the Wärtsilä engine technology they are Tier III compliant in gas mode, which of course means that we can operate in the Baltic Sea ECA without restrictions. Moreover, we expect considerable fuel cost savings. Conventional product tankers of this size have an average bunker consumption of 22 to 25 tons a day. With these newbuildings we expect daily bunker consumption of just 14 tons, ” says Tryggve Möller, Board Member of Terntank Rederi A/S.

“When the new Wärtsilä 2-stroke, low pressure, dual-fuel engine technology was introduced it was widely hailed as being a ‘game-changer’ for the industry, since it makes IMO Tier III compliance possible for virtually all vessel types running on LNG as a primary fuel, and with the lowest CAPEX and OPEX. These first installations are, therefore, an historic landmark in the process towards general acceptance of LNG as a marine fuel and a cleaner future for shipping, ” says Martin Wernli, Vice President, 2-stroke, Wärtsilä Ship Power.

The Wärtsilä 2-stroke dual-fuel technology will be rolled out to the entire Wärtsilä Generation X Engine low-speed engine portfolio. Already today Wärtsilä RT-flex50, Wärtsilä X62 and Wärtsilä X72 engines can be delivered with a dual-fuel (DF) ready package to prepare the engine for a DF conversion if needed later on.

Wärtsilä in brief
Wärtsilä is a global leader in complete lifecycle power solutions for the marine and energy markets. By emphasising technological innovation and total efficiency, Wärtsilä maximises the environmental and economic performance of the vessels and power plants of its customers. In 2012, Wärtsilä’s net sales totalled EUR 4.7 billion with approximately 18, 900 employees. The company has operations in nearly 170 locations in 70 countries around the world. Wärtsilä is listed on the NASDAQ OMX Helsinki, Finland.
www.wartsila.com