Wärtsilä Corporation,  2 December 2013 at 3 am EET – Wärtsilä,  the marine industry’s leading provider of innovative products, solutions and services, is expanding its engine portfolio with the introduction of two additional auxiliary engines, the Wärtsilä Auxpac 16 and the Wärtsilä Auxpac 32.

Both the Auxpac 16 and the Auxpac 32 are pre-engineered gensets with a turbocharged 4-stroke engine having direct fuel injection and charge air cooling and provide the electrical power onboard all types and sizes of ships.

They are based upon Wärtsilä’s 4-stroke engine technology, which has been proven with more than 1000 Auxpac 20 and 26 engines in operation having in excess of 6 million accumulated running hours experience. As a result, these new additions to the portfolio offer a high level of reliability and compliance with the IMO’s Tier II environmental regulations. Tier III compliance can be achieved with the addition of an exhaust treatment system.

The Wärtsilä Auxpac 16 is a brand new product. It is designed for merchant vessels, such as bulkers, tankers and smaller container vessels, with installed auxiliary power in the 500kWe to 750kWe per generating set range. The Wärtsilä Auxpac 16 is the smallest Auxpac generating set in the portfolio. It has been developed in co-operation with the Shanghai Marine Diesel Engine Research Institute (SMDERI) in China. The Auxpac 16 development project began in spring 2011, and has utilised the engineering experience and design of the successful Wärtsilä Auxpac 20. The engine will be produced at the Wärtsilä Qiyao Diesel Company (WQDC) joint-venture company in China.

The Wärtsilä Auxpac 32 is the auxiliary engine version of the Wärtsilä 32 family. It is aimed at the upper end of the merchant market, notably large container vessels with an auxiliary power need from approximately 2500kWe to 4500kWe per generating set. It will be produced in China at the Wärtsilä Yuchai Engine Company (WYEC) joint-venture facilities.

The introductions of these new engines are important steps in Wärtsilä’s strategy for increasing its share of the auxiliary engine market. The involvement of the Asian joint-venture companies has played an important role in making these developments possible. 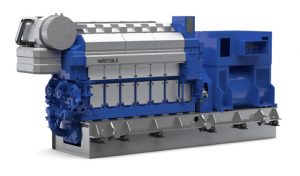 “These latest additions to our engine portfolio will help us to serve an even broader market, and it is important that they are being manufactured in China – close to our Asian customer base. The new engines are competitive and have outstanding performance for the markets they serve. Furthermore, our customers have the unique Wärtsilä worldwide service network to rely on. We expect our auxiliary engine sales to develop quickly, ” says Lars Anderson, Vice President 4-stroke, Wärtsilä Ship Power.

Wärtsilä and SMDERI signed the 50/50 joint-venture agreement in 2005 to establish WQDC in Lingang, China. The factory produces Wärtsilä Auxpac diesel generating sets for the buoyant Chinese shipbuilding market, and for export through Wärtsilä’s global sales network.

Wärtsilä and Yuchai Marine Power Co. Ltd. (YCMP), a subsidiary of Guangxi Yuchai Group, signed an agreement in 2012 to establish a 50/50 joint venture for manufacturing medium-speed marine engines in Zhuhai City, Guangdong Province. The joint venture will serve the increasingly dominant Chinese shipbuilding industry, with the focus being on the assembly and testing of Wärtsilä 20, Wärtsilä 26 and Wärtsilä 32 engines. Operations are planned to start in 2014.