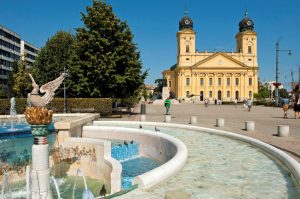 Hungary’s second city Debrecen wings onto the UK tourist radar, thanks to regular air-link from London,  By James Brewer

Hungary’s second largest city, Debrecen, is flying into tourist prominence generated by direct air connections from London and the Netherlands.

This relatively small community was – and few people outside the country are aware of this now – twice capital of Hungary in the past. It was the chief city during the independence revolution (national independence was proclaimed in the city) and dethroning of the Habsburgs in 1848-1849, and at the close of World War II in 1944-1945.

Wizz Air, the expanding Budapest-based airline specialising mainly in central and eastern Europe, in June 2012 began flying from its Luton hub and from Eindhoven to the city that claims to have the highest number (1, 982 a year) of sunshine hours in Hungary. In flight terms, at two and a half hours, Debrecen is as close to London as many other continental cities. 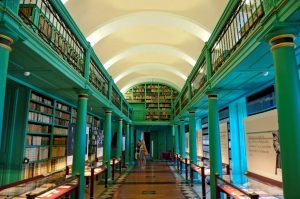 Library of the Reformed College, Debrecen

Officials from the region were citing the advantages of the new link when they attended the World Travel Market in London in November 2013, the second time they have exhibited at the huge business-to-business show. They view the London connection as a key support in putting their offering more firmly on the European tourism map.

Wizz Air offers direct flights at modest prices from London-Luton five times a week in winter, and from April 2014 there will be seven flights a week. This is a boon for expats, tourists and businesspeople – of whom the last category may be aware that Debrecen has the largest provincial conference hall in Hungary, the Kölcsey Conference Centre.

While Budapest remains the country’s premier tourist magnet, followed by Lake Balaton, discerning visitors are increasingly enjoying the attractions of a series of more tranquil, but culturally buzzing, regional capitals.

float at the Flower Carnival

In addition to being the economic, educational, scientific and cultural focus of the eastern part of Hungary, Debrecen is 40km from Hortobágy, the largest uninterrupted grassland in central Europe. Hortobágy is Hungary’s first and biggest national park, a Unesco world heritage site since 1999. Unesco says “The Hungarian puszta is an outstanding example of a cultural landscape shaped by a pastoral human society. The landscape of the Hortobágy National Park preserves intact and visible the evidence of its traditional use over more than two millennia and represents the harmonious interaction between human beings and nature.” For the same reasons, since 2008 Hortobágy has been categorised as a European Destination of Excellence.

Debrecen’s population at just over 200, 000 is about the same as Norwich, which is the 35th largest urban area in the UK, but its significance to Hungary is strategic as well as cultural: it is well placed for cross-border transport and trade with Ukraine and Romania. Within the country, Debrecen is one and a half hours by car not just from Hortobágy, but the same distance from two other Unesco world heritage sites: Tokaj wine region, and the stalactite cave of Aggtelek. The city has easy access from Hungarian motorway M3, and by hourly InterCity services from Budapest Nyugati station with a stop at Budapest Airport. It is well connected by road and rail with neighbouring countries and with rural towns.

Like many cities in Hungary, it oozes with health-giving possibilities. It has healing thermal water, a spa culture dating back almost 100 years, and a wide range of medical services, including therapies based on thermal water. In fact, the region as a whole has 205 thermal springs and 50 thermal spas.

Debrecen has long been a stronghold of Protestantism, giving rise to its sobriquet of the ‘Calvinist Rome.’ Thus the Great Calvinist Church and the 475-year-old Reformed College feature as symbols of the city. Other imposing architecture can be seen in buildings including the Old City Hall, the main building of the 30-000 student University of Debrecen, and in residential houses and mansions on Piac Street.

From the modern era come Modem, which is the largest art gallery of the region, and the shopping mall Forum.

Festivals abound, all year round. The spectacular Debrecen Flower Carnival blossoms every year on the national holiday ofAugust 20, and other lively occasions include the Debrecen Spring Cultural Festival; Mangalica Days (mangalica is an ancient breed of pig) in April; the Civic Promenade in summer; the International Military Band Festival every second year; Debrecen Jazz Days in July; Campus Festival  of rock music and other activities in July; the Béla Bartók International Choir Competition  every second year in July; Honey-Cake Festival the same month; Wine Carnival in August; weekend of Stuffed Food and Hungarian Wines in September; Palinka and Double Sausage Festival in September; the autumn festival of classical music, theatrical performances and film premieres; Martin’s Day Goose Feast with Wines of Eger in November; Advent and Christmas market in December.

As is clear from the foregoing, the culinary heritage is rich and tasty, with award-winning restaurants. Spicy Debrecen sausage is known internationally, and menus groan with stuffed cabbage Debrecen style, spare-rib soup, stuffed savoury pancakes Hortobágy style,  slambuc (a shepherd’s dish made from bacon, potatoes and pasta), specialities derived from Hungarian grey beef cattle, fish soup, dishes made from spiral-horned Racka sheep, and from mangalica pig.

Apart from these and more city celebrations, there are the festivals in Hortobágy. These include the ‘driving-out’ festival on St George’s Day (a traditional herdsmen’s occasion to mark the beginning of the grazing season) ; the national meeting and competition of herdsmen in May; Equestrian Days in  July; guided bird-watching tours to see the crane migration in October; and the herdsmen’s Advent and ’driving-in’ festival  in October. 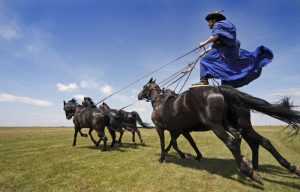 Much of the city was destroyed by bombing and a fierce tank battle in 1944, but in December of that year the Provisional National Assembly met there to form a provisional government, making it again briefly the national capital. Within the city limits is the pleasant Nagyerdő (Great Forest), the “Lung of Debrecen, ” with its baths, playgrounds, ice-rink, zoo, amusement park, swimming-pool, sports hall, hotels, cafés, tea-rooms and restaurants.

The spa, Aquaticum Medical and Bathing Centre (http://www.aquaticum.hu), in the Great Forest is one of the biggest attractions in the city.

Its origins are in the late 1820s when a bounteous well was discovered on the edge of the forest. The bathhouse was erected in classical style, with the Vigadó building, (now a top-class restaurant) in 1826. First came tub-baths and later steam baths were added.

In the 1860s the edge of the Great Forest next to the bathhouse was converted into a park. After the light railway, a motorised form of urban transport favoured in the Austro-Hungarian empire, started to operate in 1884, the park became a popular place of entertainment. It became even more popular when Imre Simonffy, then mayor of Debrecen, purchased one of the most successful buildings of the Budapest Expo of 1885, the pavilion of the cake-shop of József Dobos. Dobos gave his name to the renowned dobostorta, a layered chocolate cake with a hard caramel topping. At the turn of the 20th century the building offered guests fish dinners, celebration balls and concerts with gypsy bands. Today the Vigadó houses an atmospheric restaurant with a pleasant open-air garden shaded by old trees.

The first cold-water swimming-pool was opened to the public in 1925. While searching for oil in 1932, Ferenc Pávai Vajna found thermal water at 68°C. The water, containing alkali-chloride, hydrogen-carbonate, iodine, bromine and common salt, helps ease rheumatic and articular and other ailments. The mud is also used for curative purposes.

It takes only half an hour to drive from Debrecen to Hortobágy National Park, with its 82, 000 hectares of intact nature, and where visitors can board a ‘safari bus’ to spot rare breeds, and some the 350 species of fowl, especially enthralling during the autumn bird migration.

Hortobágy sites are crowned by a nine-arch bridge, the Shepherds’ Museum, the Hortobágy Inn, and the internationally known Máta Stud – not to mention the horse-riding skills showcased by the stockmen. 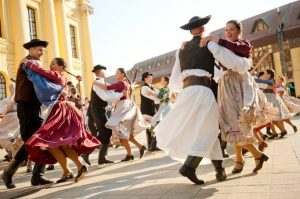 The typical inns of Hortobágy, known as csárda, offer traditional fare invoking stories and legends of the herdsmen-turned outlaws (betyár), who roamed the puszta in bygone eras. Some of the inns – Kadarcsi, Meggyes and the aforementioned Hortobágy Inn – also  function as museums.

Other side trips from Debrecen include:

– Hajdúszoboszló, Europe’s biggest spa complex, one of the most popular baths resorts of Hungary

Says Nora Erdei of the Debrecen and Hortobágy Tourism Association: “We offer a trip to the heart of central Europe, a trip to Hungary, a trip of memories for a lifetime.”