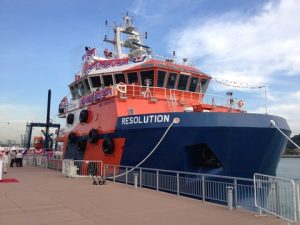 The “Resolution” berthed during the ceremony

Navis Engineering has completed work on its latest project involving fast-growing Singaporean offshore specialist Miclyn Express Offshore (MEO), following the commissioning of the DP2 system on board the 70m ROV and diving support vessel Resolution. After successful sea trials and a christening ceremony at the Keppel Bay Marina, Singapore, the vessel has departed for Indonesia, on a three-year charter to Seascape Surveys.

For Navis, the project follows quickly after its supply of the DP2 system onboard MEO Ranger, a 65m length platform supply vessel now operating in the Persian Gulf.

The Seascape charter agreement called for modifications to Resolution, with the newbuild lengthened by 6m during construction at the MEO Batam Shipyard. Enhancements included a mezzanine deck extension and installation of a crane, two (2) ROV generators, a moon pool, air compressor and A-frame, and additional PRS (taut wire and HPR).

The latest project reflects the strategic investment made by Navis in establishing operations in Singapore two years ago. The Singapore office has also taken responsibility for overseeing relations with shipbuilders throughout South East Asia, with current projects including work in Vietnam.