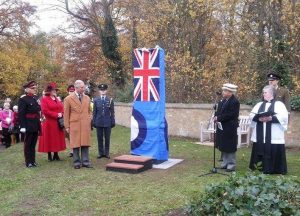 Prince Charles is invited to unveil the memorial

Seventy years after risking their lives behind enemy lines, the memory of 75 female agents who spied for Britain during World War II has been fully honoured in a ceremony at a Bedfordshire airfield. Prince Charles unveiled a memorial to the women, many of whom were tortured and killed after being captured.

They flew to France and other countries from RAF Tempsford, where the memorial has been erected, to support resistance movements and report back to London by radio on troop movements and weapons deployments by Hitler’s forces.

Until a short time ago, some of the heroines had little official recognition for their bravery and the awful personal price they paid for their undercover operations. Several recently published accounts of their exploits, including The Spy who loved, by Clare Mulley, andSisters, Secrets and Sacrifice by Susan Ottaway, and research by members by the Women in War group, have highlighted that.

Recruited by the Special Operations Executive, the secret agents had family connections with a total of 13 countries. They usually had dual nationalities and language skills that allowed them to blend in with local populations. In all, 29 were arrested, 16 were executed and one swallowed her suicide pill to avoid betraying her comrades. The December 3 2013 ceremony also honoured the courageous pilots who flew the women out and back. The agents were either landed by Lysander aircraft of the ‘moonlight squadrons’ or dropped in the dark by parachute to agreed locations, where friendly reception committees would pick them up. 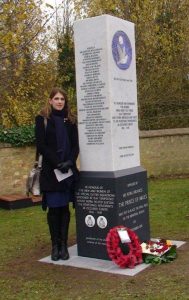 Clare Mulley at the memorial

Clare Mulley described the unveiling as a wonderful event, attended by dignitaries including Witold Sobkow the Polish Ambassador to the UK, and ambassadors from Switzerland, the Netherlands and Ireland, and the German air attaché and many others. The most important guests were the family and colleagues of several of the agents commemorated, and they included Tania Szabo and Odile Nearne, F Section’s Noreen Riols and Bob Maloubier, and the RAF’s Leonard Ratcliff and Bob Lodge, the last of whom brought Violette Szabo back from France after her first mission. Violette Szabo, following the death of her husband at El Alamein, led a sabotage group in France but was captured and executed at Ravensbrück concentration camp. Violette’s story has been told on film, and a statue was unveiled last year to Noor Inayat Khan, shot at Dachau, the only Muslim woman among the group.

Guests were touched to see a salute in the form of a fly-past by a Lysander – the only one still airworthy – from the nearby Shuttleworth Collection.

In the face of reluctance and even downright opposition by some military officers, the women underwent intensine war and wireless operator training as tough as that of their male counterparts.

Ms Mulley is author of biographies of Krystyna Skarbek, aka Christine Granville, Britain’s first female special agent of the war, and of Eglantyne Jebb, the founder of the Save the Children movement. Ms Ottaway has related the stories of sisters Jacqueline and Eileen Nearne. Jacqueline narrowly evaded capture, but her younger sister was traumatised by her concentration camp ordeal and had little government help in trying to establish a normal life after the war.

In an appeal to donors, Tempsford Parish Council raised £21, 000 to build the marble and granite memorial, which includes a mosiac of a white dove flying under a full moon.

SO HAPPY YOU,VE WRITTEN ABOUT THE CEREMONY AND THESE WONDERFUL WOMEN!CLARE MULLEN HAD A VERY INTERESTING TALK ABOUT KRYSTYNA SKARBEK AND HER BOOK AT THE POLISH HEARTH SOME TIME AGO AND SOON AFTER ANOTHER TALK AT OUR AMBASSY- I WENT TO BOTH AND LOVED MEETING CLARE- SHE IS A WONDERFUL PERSON- A VERY GOOD WRITER AND GIFTED TALKER AND COMMUNICATOT! AND WHAT A BUSY BEE YOU ARE! WELL DONE!HAVE A LOVELY CHRISTMAS AND A VERY CREATIVE 2014! LOVE TO YOU BOTH- Elzbieta

I have just published a novel about the SOE’s involvement with the Rudolf Hess flight to Scotland and subsequent investigations of the Nazi Occult and the use of astrology to gain support of America in World War II. The novel is entitled Occult House. It is available at Amazon.com. I have a web site for the novel: http://www.robertmbennett.org, as well as a Facebook page.

How can I publicize this book on your blog ?