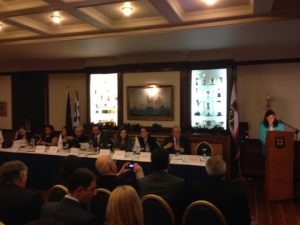 It is the fourth event of the day – following the Piraeus Marine Club, RINA and DNV GL receptions earlier on,  and it was a must attend given, not just that we are one of the media supporters of WISTA Hellas, nor that we are visiting Greece this season, but the subject of this annual forum was and is more than important given the current circumstances and parameters in Greece and beyond…

Rea Metropoulou, president of WISTA-Hellas, and her team chose a very pertinent subject, that of “The Greek State and Greek Shipping – Recovering from the crisis – hand-in-hand?”, a repeat of last year’s theme,  to stick-out the woman’s neck and speak out! In a country where everybody is protesting against just about everything all the time, in a country where its shipping industry is a phenomenon that cannot even be “accommodated” in the Guinness Book of Records for the oxymoron with the current situation and in a non-parallel comparison, it was the Greek women, like Lysistrata revisited who rose to the circumstances and created the event of events! That was confirmed towards the end, when the last speaker Kalliope Lyrintzis gave an emotional speech enough to ensure the Shipping Minister gets the message; having said that, all speakers eloquently and with straightforwardness expressed their views.

At a full house at the Yacht Club of Greece, the 11-strong Forum chaired and moderated by George D Gourdomichalis from Phoenix Shipping & Trading, did its best to convey the message to the Greek administration and Parliament via its representative the Minister of Shipping, Maritime Affairs and the Aegean, Miltiadis Varvitsiotis who has to take make or break decisions! 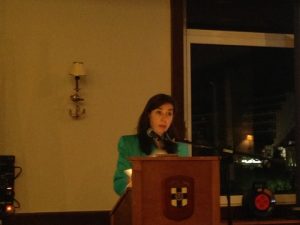 Ms Metropoulou studied law together with Varvitsiotis; hence there was a very cordial atmosphere which ought to ensure he gets the message. He missed a great part of the event despite the fact that under the circumstances one should be there all the time, to hear first hand at the material time, to use a legal expression, what’s up and deliver the appropriate response. Of course we all know how MPs in Greece handle these events, but things have to change, as the governmental presence in forums and other important events has always been an issue.

Anyway, going back to the WISTA event, same began with an interesting ten-minute welcome setting the pace. Ms Metropoulou asked for our attention as there was an eleven-minute video by Rodi Kratsa an MEP and former EP vice president (2007-12). All in all Ms Kratsa stressed the importance of Greek Shipping in the EU and EP as well as in the EC and as we have witnessed many times she has always been a staunch supporter of Greece’s rights in the maritime field. Rodi Kratsa was International Personality of the Year 2008 of the Women’s International Shipping & Trading Association (WISTA)! 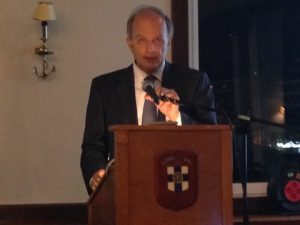 Then moderator Mr Gourdomichalis made a quick introductory note and presented the speakers, and the forum presentations began with John Platsidakis, managing director at Anangel Maritime Services and chairman of Intercargo, who gave  a nine-minute clear presentation on the situation; excellent. He was warmly applauded! 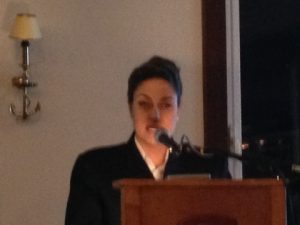 Then Captain Iakinthi Tzanaki wearing her uniform, a master mariner of the Tsakos Group, took the podium delivering a mild but interesting presentation on “The Greek seafarers’ contribution in supporting shipping companies and the Greek state during the crisis”. Good figures for references and comparisons during her slides presentation. 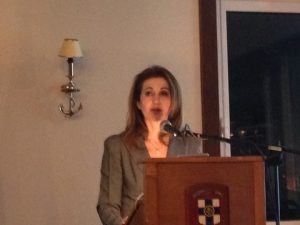 John Pachoulis, managing director of Megachart Inc, and former president of the Hellenic Shipbrokers Association, possibly one of the longest serving presidents of that body, explained his views in just under ten minutes. It remains to be seen whether he wins the argument on his positions! 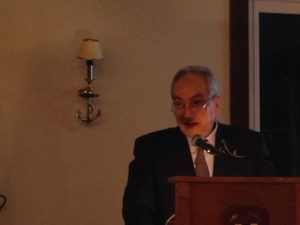 Christina Anagnostara, director at Synergy Maritime Holding Corp, gave possibly the most interesting paper on a very difficult and debate-worthy subject, that of “improving the Greek economy and Greek shipping functionality”; too difficult to digest and respond in such a short time, but hope soon to “question” her… 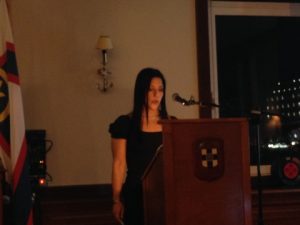 Power point speaker Katerina Stathopoulou was quite formidable in her ten-minute analysis, leaving quite a number of questions to be answered… With “History repeats itself – do we ever learn from it?”, Stathopoulou shook the finance foundations to the core. After all, shipping is attainment of money and seafarers. Indeed cash is King, but knowing the Emperors cuts finance’s Gordian knot today! Correct? 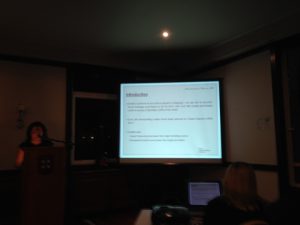 Katerina Stathopoulou during her slides presentation

And then came the 10 on the Beaufort scale presentation by Kalliope Lyrintzis, managing director of KCL Group of companies, opening the Pandora Box of Revelations! As said above, the Minister possibly got the message. “Navigating through the economic storm”… epitomised what is missing from Greece’s maritime education and training. Excellent! The delegates, close to a standing ovation, applauded her! 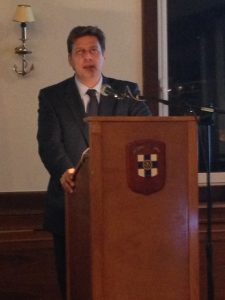 The Minister, Miltiadis Varvitsiotis, took the podium and delivered a short and well prepared speech. It seems that despite his long-standing participation over the last decade in the sector of shipping within the current government as well as when he was in opposition, he should stand up for a long-lasting shipping policy away from party politics, as shipping should remain out of all that environment. Once can see the results of the state of Greece’s administrative shipping sector – fewer Greek flag ships, unemployment, fewer seafarers despite efforts and programmes – of the last one announced, we shall eagerly wait to see its results both in the short and long term. We have expressed our disagreement both in London during his latest visit in November to the IMO, as well as today here in the WISTA-Hellas forum, and he must listen to reality and if his current policy fails not excuse himself and put the blame on others. We are students of Aristotle, and for us constructive criticism is the name of the game! As Greece takes over the Presidency of the European Union, his obligations and proper performance to the benefit of all will stigmatise his legacy; positively or negatively depending on results…

Mr Gourdomichalis recapped the main points and asked for questions. We took the first one with four subjects and for sure the minister must come to terms with reality. Obviously is a good thing to make Piraeus capable of receiving mega containerships, but do we have the shipyards to secure an unforeseen case arising from an accident, collision, grounding or otherwise? We had twice as many ships under the blue and white banner and now just close to 1, 000, and it is about time to make things happen. We do not have a single training ship and those people who object to our stand from wherever they emanate, we can entertain them live on any TV station; yes, we do provoke this issue. We cannot accept on any account that elderly pensioners, both men and women, should be deprived of the full pension they were receiving prior to this despicable “organised” crisis and at the same time be subjected to extreme and unjust, not to mention criminal behaviour from the state and being immensely taxed, particularly in relation to the pensions of officers or their widows. It goes without saying that ABs and stewards must also have a humane pension, but not to the detriment of masters and chief engineers – and other officers. An army has both officers and privates (soldiers), an office has managers and personnel, and ships have the master and the crew:  they don’t have the same wages, they don’t pay the same monthly contributions, etc etc. Hence the pension differs and officers receive higher pensions, so who had this brilliant idea to reduce same?  Under which proviso? Enough, as this will lead to a non-Greek state of seafarers. The Seaman’s Pension Fund (NAT) was ruined by the current party in power and its partners in this coalition. All excuses are null and void. Lastly the image of Greek shipping needs a face-lift…. And ah! the shipyards must return to productivity; again no excuses! Did I hear you say Hellenic Registry of Shipping? Who is responsible for Greece’s historically biggest scandal and fraud, that of the Hellenic Shipyards et al…?

Captain Panagiotis Tsakos said we put too many things for the minister to consider in our question; we agree, but it was about time such things were said. Capt Tsakos, himself an experienced master who had become with his family and investors a well known brand worldwide, did a great job to make the minister see the message, trying openly to advise him with his known style and humour, whilst we overheard the audience whispering: will he understand Captain Tsakos’ advice…?

Miki Capaitzis put forward  in his usual style a statement worthy for the minister to consider and all delegates to really think of. Mr Capaitzis is the talk of the town in the Square Mile and we do endorse his statement.

Worth mentioning that English was the official language of the forum!

A splendid cocktail reception followed, making it possible to meet, talk and exchange views on the event as well as other happenings taking place in Greece at this moment, but also to celebrate the coming of Christmas and New Year. Meeting over 200 delegates was a difficult task, but we’ve done it – more or less…

More than 14 media supporters honoured and covered the event; quite a record! We hope to bring you soon all the presentations, so keep an eye on www.allaboutshipping.co.uk

We were honoured to interview live the president of WISTA-Hellas Rea Metropoulou, who accepted our invitation with only a minute’s notice, so log on here and listen what she had to say about the event, and more: