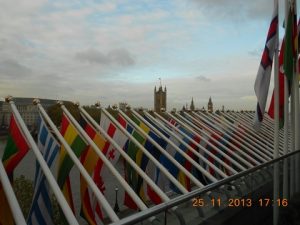 IMO audit teams will shortly be established to verify construction rules for bulk carriers and oil tankers of classification societies which act as recognized organizations (ROs), following the receipt of requests for verification by the 31 December 2013 deadline.

A new SOLAS regulation II-1/3-10 on Goal-based ship construction standards (GBS) for bulk carriers and oil tankers was adopted by IMO’s Maritime Safety Committee (MSC), at its eighty-seventh session in May 2010, by resolution MSC.290(87).  This regulation, which entered into force on 1 January 2012, requires that all oil tankers and bulk carriers of 150 m in length and above, for which the building contract is placed on or after 1 July 2016, satisfy applicable structural requirements conforming to the functional requirements of the International Goal-based Ship Construction Standards for Bulk Carriers and Oil Tankers (GBS Standards) (resolution MSC.287(87)).

Under the GBS Standards, construction rules for bulk carriers and oil tankers of classification societies which act as recognized organizations (ROs) or national Administrations will be verified, based on the Guidelines for verification of conformity with goal-based ship construction standards for bulk carriers and oil tankers (resolution MSC.296(87)) (GBS Guidelines).  According to the timetable approved by MSC 87, the deadline for the receipt by IMO of initial verification requests from classification societies was 31 December 2013.

In support of the Committee’s request that the verification process should be conducted as efficiently as possible, the International Association of Classification Societies (IACS) has delivered its Common Package 1 comprising various IACS requirements to support the requests from its member societies.

Based on the requests for verification audits, the IMO Secretariat will establish GBS Audit Teams as soon as possible, to conduct audits for verification of the subject construction rules.  The outcome of the audits will be submitted to the MSC in May 2016 at the latest and, if approved by the MSC, those construction rules will be applied to bulk carriers and oil tankers to be built on or after 1 July 2016.

On 20 December 2013, IMO Secretary-General Koji Sekimizu met with the Chairman of IACS, Mr. Roberto Cazzulo, Chairman of RINA Services, who confirmed that the IACS Council had adopted new harmonised Common Structural Rules (CSR) for oil tankers and bulk carriers, which will be presented to IMO for GBS verification as its Common Package 2, by the end of June 2014.

Commenting on the above developments, Mr. Sekimizu expressed his satisfaction with the timely and efficient manner in which the GBS verification process was being progressed, as instructed by the Maritime Safety Committee.