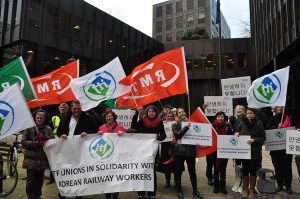 14 January 2014 – As 13 Korean Railway Workers Union (KRWU) trade union leaders charged with having led what was a legitimate and lawful industrial action made a dignified surrender to police today, the ITF (International Transport Workers’ Federation) blasted the political vendetta behind their arrest. Their placing themselves in the hands of police today was delayed by violent police intervention at the headquarters of the Korean Confederation of Trade Unions (KCTU).

Speaking at a press conference at the KCTU building this morning, Myoung hwan Kim, president of the ITF-affiliated KRWU, said: “The rail strike last year was a completely legitimate and legal struggle. The past precedents of denouncing workers’ legitimate strikes as illegal, repressing them and enacting disciplinary measures must not be repeated. This will be proven in court in due course.” (The entire statement appears below)

ITF president Paddy Crumlin said: “This is joke justice. The dignified action by these trade unionists should not obscure the ludicrous nature of what they’re charged with and the police’s behaviour today. KRWU members voted, openly and democratically, to strike to protect Korean Railways against potentially disastrous privatisation. They were charged with obstructing business, their offices were raided, their members are at threat of dismissal and the union is being targeted for damages. The charges are politically motivated, unfounded and discriminatory, and cannot be allowed to go unchallenged. They must be dropped immediately if the government is to retain any credibility.”

ITF acting general secretary Steve Cotton commented: “The victimisation of the KRWU reflects badly on the government and has unified opinion in Korea against such heavy handed aggression. It has led to a massive response by the Korean people, building up to a potential general strike on 25 February, and an outpouring of support for the unions within Korea and beyond.”

He continued: “The police have had to release trade union leaders detained on similar charges before after the KRWU challenged the legality of their detention. They should save time and avoid this travesty of justice by letting the KRWU leadership go free now and ceasing the persecution of lawful trade unionism in Korea.”

For more details of the strikes and the international support see www.itfglobal.org/campaigns/campaigns-3867.cfm

I begin by once again expressing my deep gratitude for the extensive support and encouragement you gave us during the 23-day strike we carried out last December.

It was because of this enthusiastic support and encouragement that railway workers were able to overcome the frequent acts of repression we faced and maintain our long march to stop rail privatization for 23 days. By far, the most important thing gained through this struggle was
the consensus achieved among the Korean people that the railway must never be privatized.

In addition, the agreement by the ruling and opposition parties to establish a subcommittee on the development of the railway within the National Assembly Committee on Land, Infrastructure and Transport, represents an important first step towards creating the conditions in which the National Assembly, the representative of public opinion, can lay out a path for the future of the railway through debate and dialogue.

In the context of this agreement between the ruling and opposition parties, the KRWU decided to end the strike and return to work. Yet there is still no peace on the railway. Korail management is threatening mass disciplinary actions and forced transfers, while completely shutting off all avenues for dialogue, thus stimulating more conflict.

I urge the Korail management: It is now time to stop the face off, resolve the conflict and put our heads together to come up with a real plan for the development of the rail industry and find wise solutions for other remaining problems through dialogue. The Korail management should respect the spirit of agreement achieved among the KRWU and opposition and ruling party national assembly members. I am also completely confident that a similar spirit can be achieved between the management and employees of Korail.

I and all other KRWU officers for whom arrest warrants have been issued now plan to turn ourselves over to the police voluntarily. By choosing to turn ourselves in with many issues still unsettled, we signify that we are willing to assume full responsibility for the burdens caused by this industrial dispute.

It is now up to the government and the Korail management to decide what will come next. The government and Korail should come forward to begin dialogue and negotiations. In the end it will be proven that repression cannot be a solution. I sincerely hope that we will be able to find a wise solution to the conflicts left at Korail and create a bright future for the rail industry through sincere consideration and dialogue. After having surrendered to the police I will continue to follow the situation and pay close attention to whether a table for dialogue is established.

The rail strike last year was a completely legitimate and legal struggle. The past precedents of denouncing workers’ legitimate strikes as illegal, repressing them and enacting disciplinary measures must not be repeated. This will be proven in court in due course.

The railway belongs to the people; it is the feet of common people. Please maintain your interest in and affection for the railway and pay attention to what developments take place. And please remember that the struggle against rail privatization has not ended. Railway workers will continue to play our role as the protectors of social solidarity and the public rail. Once again, I thank you for your support and encouragement and behalf of all KRWU members. We will never forget you. Thank you.