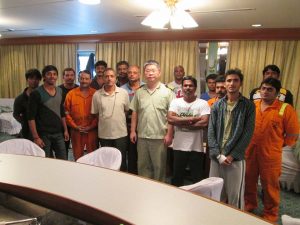 EVER SUMMIT’s Captain Horng, Tsong-Been (middle) together with the rescued Indian seafarers

At 14:00 that day EVER SUMMIT received a distress call from the BITU GULF, a Panamanian tanker, which was sinking.  The containership was on route from Shekou, China to Tanjung Pelepas, Malaysia. The captain of EVER SUMMIT immediately ordered his crew to stand by for a rescue operation and made best speed to the location of the distressed vessel.

Upon finding the lifeboat of BITU GULF around forty nautical miles off the coast of Vietnam, the crew of EVER SUMMIT acted promptly and successfully rescued all sixteen seafarers of the tanker at 16:35 pm.

The rescued seafarers received care on board EVER SUMMIT as the ship continued its voyage to Tanjung Pelepas. On completion of the rescue operation, Evergreen notified Lilly Maritime Pvt. Ltd, the owner of BITU GULF, to take responsibility for their crew in Tanjung Pelepas and arrange their repatriation.

EVER SUMMIT is one of Evergreen Line’s ‘S’ type vessels with a capacity of 7, 024 TEUs.  The ship is currently deployed in the carrier’s Far East-Middle East Gulf (APG) service.

On November 28, 2011 the crew of Evergreen Line’s 1, 164-TEU UNI- ASPIRE performed a life-saving mission south of Hong Kong and rescued a Korean seaman.