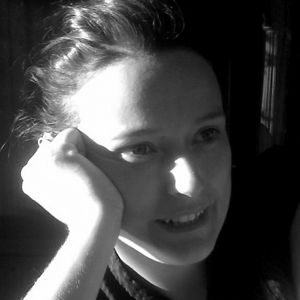 Star Wars raged “a long time ago in a galaxy far, far away, ” the movie recounts. In terms of the modern calendar, the first in the blockbuster series was filmed “a long time ago”: it was released in 1977. With its sequels and spin-offs it occupies a forceful space in movie history books.

Video artist Rä di Martino has explored the planetary iconography in her photo project No More Stars, one of the first shows being put on at the enterprising new Tryon Street Gallery in Chelsea, just a short distance from the top contemporary contender, the Saatchi Gallery. Tryon Street, the brainchild of former British Museum curator Anna Harnden, was one of the 128 galleries and other exhibitors shining bright at the London Art Fair 2014 at the Business Design Centre in Islington.

Organisers of the London Art Fair said that attendance totalled 30, 694 people over six days, far surpassing the Fair’s previous record of 25, 020 visitors in 2012, with higher footfall matched by brisk buying.

No More Stars Is a series of photographs taken, not light years away, but just a continent away, in the south of Tunisia, amid the abandoned sets of Star Wars. Unexpectedly, says Ms di Martino,  the sets had been left in place and the hot, dry climate kept parts of them intact or partially buried under the sand. This has created what she calls an almost Martian landscape.

Rä’s project began with her using Google Maps to research the North African landscape, in particular Chott el Djerid, the great salt desert in Tunisia. Intriguingly, someone had linked a photograph of crumbling plasterwork to the online map with the caption: “There is no more English Patient.” It led her to discover that The English Patient had been shot there – and Star Wars. The Rome-born artist, who moved to London in 1997 to study at Chelsea College of Art and the Slade, and to New York in 2005, set off into the desert to see for herself.

The result was a series of photographs taken over 15 days of the quasi-archaeological remains of the production of Star Wars, a series which was shown at Tate Modern’s Project Space in 2013. In effect,  Rä has created her own “force” echoing the film’s concept of an energy field that binds the galaxy together. The Galactic Empire thus lives on, as do the ‘immortal’ stars Mark Hamill, Harrison Ford, Carrie Fisher, Peter Cushing and Alec Guinness.

Rä had to hire a quad bike to get to the area that the team of director George Lucas had recreated as Tatooine, the planet where the hero character Luke Skywalker was born. Rä learned of a new role for the ruins as she met people who had moved in, including a beggar who had ‘taken over’ the childhood home of Skywalker. And film crews continue to be allured to set up camp at sites that they feel give an edge to their narratives.

Rä was captivated by the surreal dimension that these fictional but real landscapes do exist in a remote desert location. “These constructed realities are imbedded in the Western collective consciousness of pop culture, ” she says. 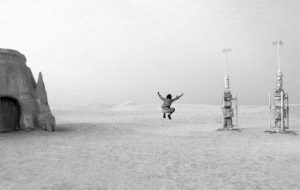 Waking up at night in the middle of the day #2 Photography by Rä di Martino. Courtesy of the artist and Tryon St Gallery

The first image that inspired and defined her new work was entitled Waking up at night in the middle of the day. The figure in the picture appears to have tumbled into the fictional world, or to be stamping on it to ensure its solidity.

Anna Harnden’s aim at Tryon St is “to bring together artists from different artistic and cultural backgrounds in order to create new dialogues concerning heritage and the contemporary.” This is a natural progression from her career at the British Museum, where among other highlights she was lead curator for the touring exhibition Treasures of the World’s Cultures.

The inaugural exhibition featured artists from South Korea, New Zealand and Ecuador, and this was followed by an exhibition named Meridian (Nov 28 – Feb 7).  Meridian includes a piece by Stefana McClure entitled The End of the World – it is a tightly coiled ball made from the last print copy of the defunct Sunday paper News of the World from July 2011. As a hand-made work, it represents “the antithesis to the mass production of print media.” 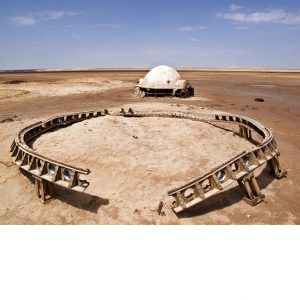 Tryon St is until the end of February 2014 staging Platform#01, part of an ongoing outdoor sculpture programme supported by 1st Asset, an agent for luxury properties, to encourage the work of emerging and established artists. There will be solo exhibitions by Alastair Mackie and Oscar Santillan from February 12 to  March 28; and a solo exhibition of Rä di Martino from April 2 to May 16 2014.