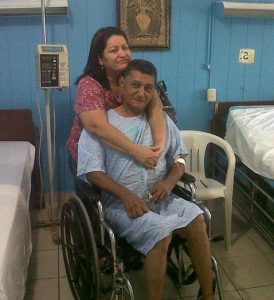 30 January 2014 – The father of endangered Honduran dockers’ leader Victor Crespo has died following a deliberate hit and run attack. The driver was seen running from the stolen car wielding a pistol.

Victor Crespo was moved to safety following an attempt in September on his life. He has been continuing his work as president of the ITF-affiliated Sindicato Gremial de Trabajadores del Muelle (SGTM) from a hidden location. It is clear that those responsible for the earlier attempt have now targeted his family. His father, Victor Manuel Crespo Puerto, was declared brain-dead following the assault, and his life support was switched off yesterday.

Death threats have also begun again against Crespo’s colleagues in the SGTM leadership. The ITF and SGTM believe these are connected to the union’s lawful request for a collective bargaining agreement at the port and the recognition that benefits have not been paid, despite the law requiring them. The port operating concession has recently been taken over by ICTSI, which has hired a single stevedoring company. When the SGTM presented legal cases to press for its members’ rights the death threats immediately resumed.

Antonio Rodriquez Fritz, ITF Americas regional secretary, commented: “The president of Honduras, the labour minister and the local police have failed to provide any protection for Victor or his family – perhaps not surprisingly in a country where it is often claimed that the authorities are behind attacks against human and trade union rights activists. We know that the danger to Victor has not diminished and are taking the necessary steps to protect him. What none of us had expected was that the attackers would be so cowardly and cold blooded as to murder an innocent and elderly man in his place.”

In a personal message to Victor Crespo, ITF president and dockers’ section chair said: ” The cowardice and corruption that has taken your father’s life can only be met with more determination and the steadfast and steely will of our organisation and labour movement together with whatever resources may be required to ensure true justice for your father’s sacrifice and for labour justice in Honduras to be realised, including from your Government. Please know with absolute assurance, Victor, we will not rest until justice is served.”