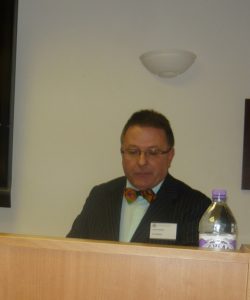 RTI  have been involved in the ISO 28000 /ISO PAS 28007 pilot program to audit maritime security companies (PMSCs) to a new ISO standard as one of the potential certification bodies.

Details of a the progress update that was held on HQS Wellington  on the 29th of January can be viewed herebelow,  together with their presentation  (by Steve Cameron, RTI Marine Director Regional Specialist; Africa )  in case of interest and are summarised as below :-

QUOTE- There had been some concerns that the risk assessments of PMSCs are not always robust enough, and the ISO 28007 pilot study has given a chance for reflection and for remedial action to be taken.

– We also noted that GUARDCON does not address operational safety requirements for Captain of the ship (e.g. during embarkation/disembarkation at sea by pilot launch), and so there is still work to be done to drive maritime operational improvements for PMSCs.

– In some locations, launches without radar ( which is not uncommon) are transiting port entrance channels at night time  where because the marker buoys are unlit, pose a potential collision risk, especially during periods of poor visibility such as the monsoon season. This is something for  port authorities to address.

Floating armouries have been developed so that PMSC teams can transit countries where there are arms restrictions. These allow arms, ammunition and security equipment to be embarked / disembarked  and securely stored until the next transit. Examples of floating armouries include :-

As part of the ISO supply chain audit we have observed weapons being  logged in/out of floating armouries we have been satisfied with the secure storage and management of the facilities.