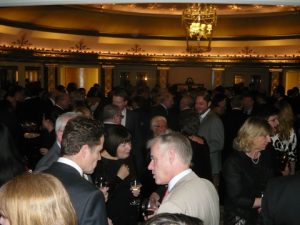 Warming up with networking…

The prestigious Dorchester Hotel Ballroom in London was the befitting venue for the Hellenic Engineers Society of Great Britain (HESGB)* 19th annual dinner and dance last night, with over 500 guests of more than 30 nationalities.

The President of the Society Mr Dimitris N. Monioudis and the HESGB committee provided not only a stunning venue but an entire evening to remember. Starting with networking drinks in the Gold, Silver and Crush Room before walking into the ornately decorated ballroom, guests were being shown the London Greek shipping community at its very best. 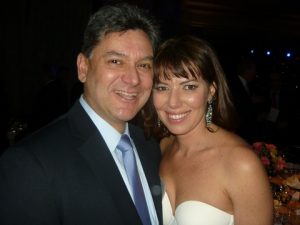 The president of HESGB Dimitris Monioudis and his wife Camila

The event was supported by HESGB members and companies including this year new companies such as Costa Navarino, Gulf Oil Marine, Lukoil Oil Company, Salzgitter Maschinenbau AG and Sea Guardian.

In addition, the endorsement and support of the event by major companies such as ABS, Bureau Veritas, ClassNK, DNV GL,  Holman Fenwick Willan LLP,   Lloyd’s Register,  Wilhelmsen,  to name a few, showed the importance of HESGB and the ongoing strength of the Greek London shipping community. The event’s programme was impressively packed with a multitude of companies supporting and advertising products and services to global shipping clients too. 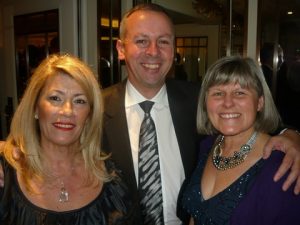 The food during the evening was stunning and interspersed by dancers from the Greek Ladies’ Lycee in London (Lykeion ton Hellidnidon). They appeared on stage performing folklore dances from the Greek Islands and Minor Asia – a great performance showcasing traditional Greek dancing which went on to include guests being able to join in with the fun! 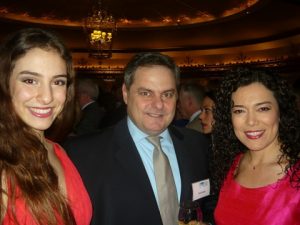 The welcome address by the society’s President Mr Dimitris N. Monioudis, warmly welcomed the evening’s guests and thanked event sponsors, some of whom had supported the event since the very first year such as International Paints, Castrol and Chevron. He also dedicated the success of the event to hard work of the dedicated HESGB Committee. 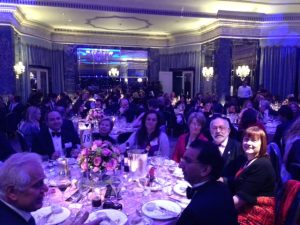 The media table “Hermes” –  depicting the message for press, media and communications, on centre stage

“2013 was no doubt a dismal year for Greece and Cyprus” he said “but there is not only doom and gloom. As of January 1st , Greece holds the Presidency of the European Union, for the first half of 2014, and we await to see the face of European solidarity in action. The Greek community continues to prosper even in these hard times.” 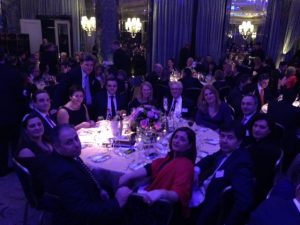 Pointing out the wide array of companies in the room Mr Monioudis highlighted LGR London Greek Radio, which although is broadcast in London, reaches a worldwide audience through the internet and St Andrews the Apostle School in North London, the very first state funded Greek Orthodox School which opened in September. 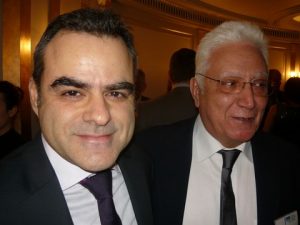 “As per the 2013 United Nations report, the top five ship owning countries are; Korea fifth, Germany fourth, China third, Japan second and GREECE number one with 15.2% of the world tonnage.” Mr Monioudis declared to rousing applause. ”We sincerely hope that the latest moves by the Greek Government do not mess around with those statistics. At the same time, shipping provides the livelihood of many of us here but the lifestyle of all of us but at the same time relying on a small number of totally unappreciated people – the seafarers.”

Jan Pillar from Blohm & Voss with his wife Maria winners in the raffle for a luxury weekend in the UK! 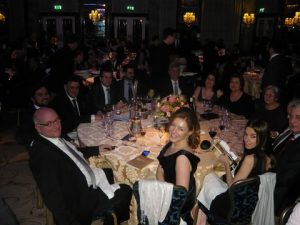 The Fujairah Marine Services table headed by Captain George Pratsinis and his wife, and guests, amongst them Mrs. Maria Kontoyannis, Lucas Kontoyannis from the IMO, the GSCC Director Commodore (Rt HCG) Costas Amarantides and his wife Tenia, PNO’s George Anastassiou and his wife Mary 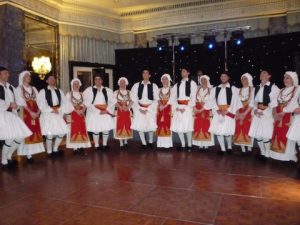 With 1.5 million seafarers staffing over 50, 000 vessels worldwide, Mr Monioudis highlighted the instances of ship hijackings worldwide and in recognition of sailors contributions to our vital industry, the evenings chosen charity was Sailor’s Society. Making a generous donation as HESGB, guests were also encouraged to also support this hardworking charity. 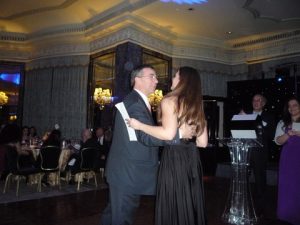 The evening’s entertainment then continued with Katerina Vrana, an energetic Greek stand-up comedienne, based in London who has performed on television and radio worldwide and then guest took to the dance floor to the music of Hellenic Nights and DJ Avgoustinos Galiassos with Greek and international music and songs. The Raffle Prize Draw was more than unique with twenty two luxury items donated by individuals and companies. A unique prize of a portrait painting worth £2, 500 donated by CO3 Art Gallery, a seven day cruise for two offered by Majestic International Cruises; a weekend break for two in the Bath kindly donated by Fujairah Marine Services and Trading, an apple ipad mini donated by Marlink and a Flight Experience over Athens in a four-seater Cirrus SR 22 Aircraft to name but a few… and there were some very lucky winners! The Pilaars won the weekend for two; Sarah Hextall got the Tory Burch – Robinson mini textured-leather shoulder bag; Irene Dervas the SoundLink® Bluetooth® Mobile speaker II; Linda Tselepis’ luck was a Folli Follie Heart4Heart necklace and Follie di Fiori Pendants; Helen Mavrogiorgis has now a  mini ipad; Theo Xenakoudis  a £200 John Lewis Voucher Prize; John Green won 2 tickets tp Chelsea vs Arsenal at Stamford Bridge on 22nd March 2014; Christos Karyofyllis  a Kindle Fire Wi-Fi Tablet  as well as a Collection of books on the Parthenon and the new Acropolis Museum – what a double winner raing hte stakes at A.P & A Ltd…; Dinos Symeonidis the Harrods Celebration of Chocolate hamper; Dora Yfantidou a Sanctuary Spa Champagne Day Gift Voucher; Albert Levy a pair of silver and pale blue enamel cufflinks from the Kristina Charrington Collection and Brian King Nautical Wall mounted clock.. 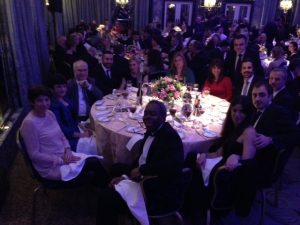 The Marshall Islands table with Tony Julien at the forefront; the most smiling table given that recently the went above the 100 million tons gross under their banner! Good to see, as in previous events (all HESGB events) the new generation’s full force congregation in London, most of them University students, amongst them Antonis Virgiotis from Southampton University, George C. Amarantides from Loughborough University where he studies Electrical Engineering and his girlfriend Toni Ewen from the same University’s Criminologist’s faculty, Grace T. Pappas from Camberwell’s IAL University (Arts), Ariana Monioudis from Newcastle’s University – Faculty of Architecture, Damianos  “Danny” Tselentakis from King;s College London School of Languages,  Apollonia Koukios (studying in London engineering), Nicola Holroyd (just got pilot’s license),  Dinos Kalognomas at Whitgift School (doing A Levels),  and many others – there where over thirty students; yet another record. 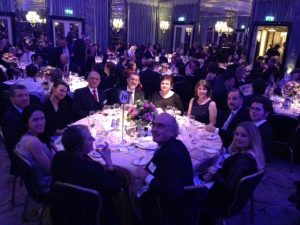 One of DNV Gl’s tables with the Foustanos’, Ms K. Hauge, Ioannis Kourmatzis and his wife, Dr. and Mrs. Nicholas Mikelis, S. Mockler, The Zaranis’ and George Dimitriou with with daughter Theodora 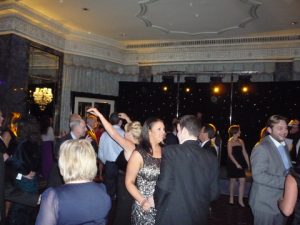 Dancing and network until 2am concluded a fabulous evening and thank you to all who supported the event – see you next year, when the event will be even bigger! ** As soon as the official photographer Antony Alexandrou provides HESGB site with the pictures we will insert the link herebelow so everybody can log on and see the full success of the event.

Catch the next wave…