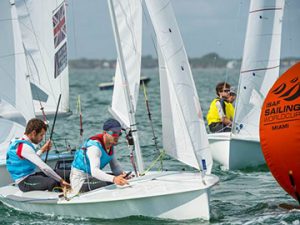 Saturday 1 February 2014 –  The Miami weather saved the best for last on a special Medal Race Saturday at the 2014 ISAF Sailing World Cup Miami.

Medals were decided in ten Olympic events on Biscayne Bay under sunny skies and enough wind for good racing. This year’s regatta offered a little bit of everything, including success from former champions, major upsets, and a glimpse into the future of Olympic level one-design sailing.

Uncooperative wind this week limited the number of series races for most of the events. This created even more significance for the Medal Races, as many sailors and their crews were in contention Saturday. The Medal Race series included the top ten ranked sailors in each fleet competing in one race with double points applied. The 49er and 49erFX conduct a series of three short races worth single points each.

The story of the day, quite possibly came from the Men’s 470 event.

The defending champions Stu McNay and Dave Hughes (USA) had a slight lead over Sofian Bouvet and Jeremie Mion (FRA) by one point at the start of the day in the Men’s 470 event. The regatta favorites World #1 Mat Belcher and Will Ryan (AUS) were 14 points back of the leaders.

Saturday belonged to the French team Bouvet and Mion who notched their first ISAF World Cup victory. A fourth place finish was good enough to secure the gold medal, as fleet leaders McNay and Hughes dropped back to ninth in the medal race.

Meanwhile, Belcher and Ryan placed second, which moved them up for a silver medal. McNay and Hughes earned bronze medal honors.

The second place finish for Belcher snaps his 18 regatta win streak, and 10th with Ryan.

Belcher had this to say about this week’s experience and the end of their win streak, “Getting in six races as opposed to 10 was challenging, but the French had a great regatta, and so did the Americans. The fleet quality here is phenomenal. We’ve got most of the top 15 in the world here.”

“We’ve learned a lot about our competitors and how they race in these conditions. It certainly motivated the fleet to try and turn those results, but for us it’s all about Rio. And these conditions will be similar to Rio.”

On his gold medal Bouvet commented, “We are very happy because it was the objective to win the regatta and be better than Mat and Will. We try to do our best in every important regatta. Here was very important for us because it’s the start of 2014 and we wanted to let everybody know how good we are.”

Winning the Medal Race was Panagiotis Mantis and Pavlos Kagialis (GRE). The Greek team finished eight points ahead of Belcher and Ryan, and 12 points ahead of World #3 Sime Fantela and Igor Marenic (CRO).

The Italians were untouchable in the Medal Race, leading from start to finish and were delighted after racing, “We are very happy we won here in Miami, ” said Sicouri. “It’s the first time for us we’ve won a World Cup. We couldn’t have asked for more.”

Heading into the day the Italians were locked on 36-points with training partners Thomas Zajac and Tanja Frank (AUT) so it was a winner takes all scenario. A strong start mixed with good upwind speed meant they had a solid advantage at the first mark. From there the chasing pack could not touch them and they raced away to take the win.

Sicouri added, “It was a good race, we had a good start and that’s what allowed us to get ahead of the Austrians, our direct competitors. From there we raced our race, just had fun and it worked.”

The Austrians came through in seventh in the Medal Race which was enough to secure silver.

A fight for bronze played out at the back of the fleet. Ben Saxton and Hannah Diamond (GBR) trailed Iker Martinez and Tara Pacheco (ESP) by two points heading into the Medal Race with it all to play for.

The Brits came from behind to pass the Spaniards at the midway point, finishing in ninth and securing bronze.

Italy’s Mattia Camboni came out with youthful exuberance in the Medal Race to power ahead early on but Kokkalanis fought back.

Trailing the young Italian by 19 seconds at the first mark Kokkalanis pushed hard to make up the difference as he explained, “It turned out to be really good in the second half of the upwind. I didn’t have a good start but I tried to cover and I worked well with the shifts and got up to second position at the top.”

“I’m very excited to win this race. The World Cup is one of the most important races. I’m really happy, what more can I say.”

Camboni was rewarded for his bright start and took second in the Medal Race, finishing seventh overall whilst the battle for the remaining podium spots played out behind him.

With the points close anything was possible. Nimrod Mashich (ISR) was able to secure silver, finishing in sixth but Brazil’s Ricardo Santos dropped out of bronze having dropped to last in the Medal Race.

Japan’s Makoto Tomizawa replaced him in third having finished in fifth.

World #1 Bryony Shaw (GBR) once again proved her all-round credentials in the Women’s RS:X by taking her first gold of 2014.

Shaw had a bumper 2013, picking up medals in seven of nine regattas and is happy how 2014 has commenced, “It’s a great way to start the year, ” said Shaw immediately after racing. “I’ve led from the beginning of the week and wanted to just make a good race.”

Shaw came through in third in an eventful Medal Race as she described, “I thought I’d put myself in a really good position above the pack. One Italian, Flavia [Tartaglini], who I was defending against was on my hip the whole way to windward and the other Italian [Laura Linares] tacked away to the right side. I kind of lost track of her and when she came back into the picture she had a really nice lever and led us all from the left hand side.”

“From then on it was about trying to keep a lane. It was so tight but there was a tight little fumble at the windward mark so I slipped through to third. There was quite a lot of current and I got stuck on the wrong side of the track so had to fight back so I didn’t make it easy for myself.”

Charline Picon (FRA) got caught up at the first mark, holding several of the fleet up. Laura Linares (ITA) was the benefactor of the tangle as she sailed away and opened up a lead in excess of one minute.

As Shaw came through in third picking up gold, Linares’ race victory promoted her up to second, demoting compatriot Flavia Tartaglini (ITA) to third.

World #3 Sophie Weguelin and Eilidh McIntyre (GBR) continued their triumphant ways on Saturday by coming from behind to win the medal race and seal the gold medal in the small but talented Women’s 470.

The Britons made a late surge on the final downwind for the decisive win after a slow start to begin the race. They started the day with an eight point advantage.

McIntyre was ecstatic about the team’s performance this week, “We had an awful start and had to battle our way through. The people we didn’t want to be winning were winning, so it was a pretty full-on race. But we pulled through and managed to win it, so it’s all good.

Paige Railey (USA) successfully defended her ISAF Sailing World Cup Miami title from last year with another stellar performance this week. Railey was the most consistent sailor from start to finish with a fleet series scoring line of 2-1-2-(12)-2-4. She had an 11 point lead over 2012 Olympic silver medalist Marit Bouwmeester (NED) heading into Saturday.

Bouwmeester comfortably won the medal race and Railey was second. They were first and second, respectively around each mark.

“I had some goals for how I wanted to sail the medal race and where I wanted to finish, ” said Railey. “I wasn’t thinking about the – ‘what if’ – if I do this, I could lose the event. It was more about what I was going to work towards so I can keep progressing for Rio, and what we will face there.”

World #2 Tonci Stipanovic (CRO) continued his winning ways and held on to his three point lead from Friday. He placed fifth Saturday, which was enough to win by four points over medal race winner and 2013 World Champion Robert Scheidt (BRA). Stipanovic, the 2013 European Champion, posted steady results throughout the week (2-(5)-1-1-2) leading up to today’s medal race.

“I was able to stay so consistent this week because I was confident in my light air technique, ” said Stipanovic. “I was able to use that by getting off the line well. Coming here, I had no expectations because I didn’t do much training after the worlds. I was able to keep a clear mind throughout the event. After this, I will head back to Croatia and train there until the Palma [World Cup].”

The 2011 World Champion Giles Scott (GBR) made a successful come from behind victory on Saturday to take home the gold medal. Scott finished nine seconds behind Luke Lawrence (USA) for second place. Overnight leader Oliver Tweddell (AUS) slipped up with an eighth place finish Saturday after leading by nine points.

Scott had this say about his big day, “It was a very difficult race and I played it very conservatively. Oli(ver) was a bit more high-risk. I managed to dial him down when I was coming down on the port layline on the downwind. That held him up another couple of boat lengths which confirmed it for me.”

The French pair had a handsome lead over Giulia Conti and Francesca Clapcich (ITA) in advance of the final but with three races on the agenda, anything was possible.

Steyaert and Bossard had room to sail conservatively and came through with an 8-2-5 score line that ensured that they finished 14 points ahead of Conti and Clapcich.

Standout performers of the day were Frances Peters and Nicola Groves who recorded 2-5-1. The result pushed the Britons up into third, overtaking Martine Grael and Kahena Kunze (BRA) who dropped to fourth.

Jonas Warrer and Peter Lang (DEN) came out on top in a testing final day of 49er racing. With three ten minute races in an enclosed theatre anything was possible with a number of score lines possible.

Consistency has been sparse in the 49er fleet throughout the week, reflecting in the high score lines from 12 races and on the final day Warrer and Lang were able to put together steady races to pick up gold.

A 6-4-3 score line put the Danes on 67 points with USA’s Brad Funk and Trevor Burd two points behind on 69 points.

Stevie Morrison and Chris Grube (GBR) rounded off the podium on 70 points.

Live tracking in 2D and 3D will be available during ISAF Sailing World Cup Miami. Click here to access the tracking.