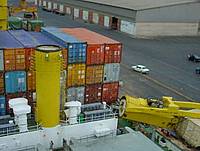 All cargo ships, without exception, have some form of gear and equipment on board. Incidents have highlighted the need for greater clarity over the inspection and maintenance regime internationally. Here, we explore the background and proposals.

Ships’ gear generally consists of two types, being  shipboard lifting appliances and cargo lashing and securing equipment. Both are essential for the safe and efficient operation of the ship and especially so when we consider container ships. However, is this equipment being maintained as intended in the manufacturers’ instructions and/or as specified by the Classification Society?

With respect to the first category of equipment, many incidents in recent years indicate that all is far from well. An equipment failure in a simple task such as loading ships’ stores can lead to serious injury – such an occurrence led to the death of a stores barge skipper recently.  A similar failure with a cargo crane could lead to a multiple fatality incident and/or serious cargo claims.

Several maritime administrations have been concerned about this failure in ships’ lifting appliances for a number of years, leading to calls for IMO (International Maritime Organization) to legislate for inspection and examination routines. The proposal is to make them part of the all embracing SOLAS (International Convention for the Safety of Life at Sea) legislation and not just a requirement of national and regional laws, which are by no means universally applied.

There is also a misconception that Classification Societies ‘regulate’ such inspections, but this is not so. Estimates reveal that perhaps only 3% of the global fleet is so covered as it is not a mandatory requirement.

The only international standard is that contained in ILO (International Labour Organization) Convention 152, but as this has only been ratified by a relatively small number of maritime states (26) this can hardly be viewed as a truly global requirement (although some jurisdictions have independently implemented the standards). Furthermore, as Maritime New Zealand (MNZ, the country’s competent authority) point out in their latest submission to IMO, this convention does not contain a ‘no more favourable treatment’ clause as can be found in SOLAS. By bringing such equipment under the auspices of SOLAS, MNZ argue that Port States would have greater control and powers in relation to ships’ lifting appliance.

MNZ has been co-ordinating a formal IMO inter-sessional correspondence group charged with looking at the potential scale of the problem and drafting an appropriate SOLAS amendment. IMO’s DE (Design of Ships and Equipment) sub-committee listened to the views of various nations who have reported on serious incidents and also those of non-governmental organisations, notably ICHCA who presented an analysis of incidents obtained via the International Group of P&I Clubs.

It is beyond doubt that there are far too many incidents occurring; the question remains what the International Shipping community is prepared to do about it? As part of the inter-sessional research it was necessary to establish the primary cause of such incidents.

New Zealand’s submission lists the details of over 100 specific incidents that have occurred in recent times. Of these, 70 occurred with ‘pedestal’ type cranes and over 50 were attributable to maintenance issues. This lack of effective maintenance manifesting itself in outcomes such as:

ICHCA’s own research, carried out by the International Group of P&I Clubs, revealed that there was over 126 reported incidents from members representing 13, 000 vessels. One serious incident in South America led to the death of three port workers when a pedestal crane failed just three weeks after examination. This clearly calls into question the effectiveness of these examinations and whether the personnel carrying out the work were competent to do so.

Concerns over such examinations and crew preparations for same led the UK P&I Club, in conjunction with Lloyds Register and two crane manufacturers (Macgregor and Liebherr) to produce a guide to ‘Survey and Examination of Ships’ Lifting Appliances’ which was published in 2011 and is freely available

This comprehensive document points out key parts of the equipment that should be included in such examinations. Some of these are difficult to reach, potentially a reason why there have been so many failures. This includes items such as the ‘slewing rings’ and ’holding down bolts’ on pedestal cranes which can easily be coated in numerous layers of paint and rusting away quietly under that apparently intact cover.

All ships are required to carry a ‘Register of Lifting Appliances and Cargo Handling Gear’, which should include a full set of Certificates for all appliances and gear in use on the ship, and maintenance and service records should also be available.

In general (depending on national or regional legislation) lifting appliances should be examined by a competent person at least once every 12 months. It is normal to have a more thorough examination and a re-test every five years or after an incident or modification to the equipment. It is clear, given the number of serious incidents, that the annual inspections, which are not required to be carried out independently, may not be totally reliable.

If the SOLAS amendment is approved – and that is by no means guaranteed – such inspections and examinations will be mandated under international law, thus affording Port States the ability to monitor such inspections and approve the competence of the person authorised to carry them out.

It is hoped therefore that by so doing, these very important ‘assets’ on cargo vessels do not become a ‘liability’.

We gratefully acknowledge the assistance in the preparation of this article of Capt Richard Brough OBE, ICHCA’s Technical Advisor