The women who drive emerging markets… 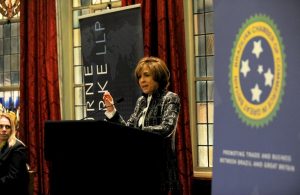 The women who drive emerging markets:  navigating challenges in the world’s key industries,  By James Brewer

Some of the top women in commercial life have spoken of their passion for working in emerging markets, but warned of the need to adapt to local cultures and avoid the ‘bangers and mash’ syndrome.

At a big London event with the theme Emerging Markets: The Women Who Drive Them.  Navigating challenges in the world’s key industries,  the executives revealed some of the lessons they had learned meeting challenges in male-oriented fields.

The event, on January 30 2014 at the Painters’ Hall, Little Trinity Lane in the City, highlighted stories of success in developing markets and offered a female perspective on what it takes to operate profitably in such areas.

It was organised by New York-based law firm Chadbourne & Parke which has offices in 10 countries. The audience of nearly 200 included people from branches of industry including finance and banking, energy, law, insurance, risk consultancy, accountancy and tourism.

She immediately hit an upbeat note about prospects in her sector, especially in regard to Russia, but advised strongly: “You need to localise your business and your brand. [People in Russia] don’t want bangers and mash, they want borscht; they want vegetables. As my [company] chairman says, whenever a strategy and a culture clash, culture will win every time.” She urged: “Get the leadership and the culture in lockstep!”

All speakers at the meeting concentrated on business strategy rather than gender campaigning, although there was mention that the FTSE 100 has only two female chief executives (but 20% of all big executive directors and 25% of non-executives are women).

Ms Brav said that her geographical area of responsibility was designated as Europe, but included Turkey, countries of the Commonwealth of Independent States, and northern Africa.

She declared: “I enjoy working in emerging markets and find them fascinating and complex. There is no such thing as a Europe strategy.  It is a mixed bag of markets.” Three key markets her group wanted to grow were UK, Germany and Russia.  Why Russia? It is the largest country in the world with nine time zones and 13 cities with more than 1m inhabitants; it has huge growth potential in the hospitality industry; and has a huge mid-market segment.

Brands were becoming more important, said Ms Brav. “We have been in Russia since 1999. Since then we have 19 hotels open, and there are 11 in the pipeline. We plan to have 100 operating by 2020. That means we shall be number one in the market.

“The most important thing, ” she advised, “is to come to an emerging market with an open mind.” It was essential to carry out a lot of research, take a measured approach and know beyond a shadow of doubt you must go into that market, and be prepared to invest ahead of the curve. In mature markets you want to invest with the growth. If you have a product, a brand, you need to shout about it.

“You need to show the market that you are committed. In emerging markets, there are so many businesses that are fly-by-night, here today and gone tomorrow.”

She said: “Russia is vibrant, it is exciting.  There is so much opportunity for your business.  It is a phenomenal market, and is is a market that accepts global brands.” She said that 70% of revenue growth in future would come from emerging markets.

“You have to have passion for your brand, and you have to love – I mean,  love – the country you are going to do business in.”

A panel session proceeded at the livery hall, with industry leaders versed in operating in Latin America, the Middle East, Russia and India.

Jacqueline Campos, the first female managing director of Petrobras Europe, was the first speaker. The Petrobras group has a woman chief executive, Maria das Graças Silva Foster. The president of Brazil is Dilma Roussef, is the first woman to occupy that post. In the light of that, Ms Campos was asked: “Do you think that women in your sector have now ‘got it all’?”

It seemed that it was too early to say that. Ms Campos – a naval engineer from Rio de Janeiro – said that she had researched that day the composition of engineers in Petrobras, and identified that the group had 25 naval engineers, and two out of the six naval engineers who were general managers were women.

She said that a main reason she went in for naval engineering when younger was that, as one of hundreds of people graduating each year, she was determined to get a job. “I had six job offers, while some of my colleagues in civil engineering, for example, were jobless.” She had not wanted to study naval engineering on her own so had convinced a friend to join her “and she is now employed in a big shipowning company.”

Ms Campos, who is responsible for leading the Petrobras trading team for crude oil, products and shipping covering Europe, the Middle East and Africa, had been a panel member in September at the 2013 London forum of WISTA-UK, part of the Women’s International Shipping & Trading Association.
She said at the Chadbourne & Parke meeting that her way had been “if you have something to say, say it, and that drive has pushed me to an equal position. Today the girls, and the boys, have good opportunities in [Petrobras].”

Next to speak was Ieda Gomes.  She is a leading expert in natural gas markets, and managing director of Energix Strategy, an energy project development company. She was formerly head of new ventures at BP, and the first female chief executive of an energy company when she was head of the São Paulo Gas Co.

Ms Gomes said that being the first woman engineer in a very macho business with big power plants, “you had to learn everything on the job, and to read a lot. It took me eight years to be promoted. The important thing is people believing in you and giving you an opportunity.”

Some of the Emerging Markets meeting audience

Ms Gomes said: “It is tough to get to the top, but once you are there, people respect you a lot.”

The third panel member, Olga Zinovieva, is first deputy chief executive and deputy chairman of the management board of Interros, one of Russia’s largest private investment companies with interests in metals and mining, mass media, tourism, real estate, air transport and logistics. Ms Zinovieva, who in a magazine poll was voted most influential businesswoman in Russia, was asked if her male colleagues were happy to be led by a woman.

She replied that throughout her career she had been lucky to have “fantastic bosses.”  She said that women had to achieve the same goals as men, but in a shorter time.

The most stressful time, said Ms Zinovieva, was the financial crisis of 2008-2009, but “nobody really wants you to go bankrupt, so work with them and find a solution acceptable to all parties.”

She disclosed that when younger she wanted to be a doctor, but her mother said there were already two medical specialists in the family, “so I went into economics.” She said modestly of her success: “I just happened to be in the right place at the right time.”

Grace Pinto, managing director of Ryan Group of Institutions, the largest privately held educational group in India, running 130 schools across the country, said that it was challenging in male-dominated India to survive difficulties as a woman but it was possible for good to prevail, “and that is the strength I have got from Jesus.  Mother Teresa [who worked among the poor of Calcutta and founded hospices and homes] is my role model. If she can come to India and serve the children, why cannot I, as an Indian woman?”

She said that her organisation operated without any funds from the government of India, and had nearly 250, 000 children studying on its rolls. At least 90% of the teachers were female. The children were taught to fear and love God, obey their parents, and respect one another. Now “people have recognised education as important in every nook and corner of the country.”

Fifth panellist was Aisha Nadar, senior consultant with Advokatfirman Runeland, who specialises in public procurement and dispute resolution in construction and defence systems, and Islamic finance. She is a member of the updates task group of the International Federation of Consulting Engineers.

Ms Nadar said that in the 1980s contractors thought that women engineers were a liability “and did not make good engineers anyway.” You must do the hard work up front and feel you have the right.” Reflecting on one opportunity she had missed when younger, she said she had then adopted the attitude of “I do not want to be passive for the next one. Opportunities are not given to you, they are earned.  In the United States, every day you have to prove yourself.”

In the Middle East, said Ms Nadar, if a woman is put in a position of authority, it is generally accepted. “It may be hard to get there, but once you do you are respected for it.” If there was one’take-away’ lesson, it was that “you are not there as a woman, you are there as a professional, ” said Ms Nadar.

Answering a member of the audience who asked whether gender was a dead subject in the workplace, Ms Nadar replied: “No, it is not. Women have a responsibility to do a good job. It is not easy being a woman. I think a lot of leadership and mentoring is required.”

The panel discussion was imoderated by Silvia Fazio, head of the Brazil desk in London of Chadbourne & Parke. She is a founding member of Chadbourne’s Latin American Leadership group, and editor of the 2013 book Brazilian Commercial Law: A Practical Guide, ” with contributions from 19 Brazilian practitioners.