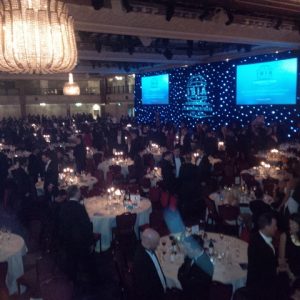 A view of the Great Room at Grosvenor House Hotel

In a bid to improve bunker quality across the marine fuel supply chain, the International Bunker Industry Association (IBIA) has called on marine fuel suppliers to adopt the ISO 2010 specifications for bunkers. Despite having been introduced four years ago to improve bunker standards, it is estimated that only a quarter of bunker suppliers are currently supplying in accordance with the 2010 specifications.

“ECO vessels are now entering the market equipped with engines which are more sensitive than vessels have ever had before. The ISO specs were agreed four years ago because there was a real need for them. Yet only 25% of suppliers are supplying in accordance with these specs. Indeed tested samples which were found to be off-spec reached an all time high in 2013 with one quarter not reaching the required standards. Something is wrong.” 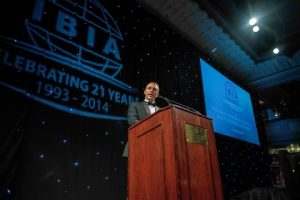 IBIA is working to address the problem and has submitted a paper to the International Maritime Organization calling for clarity and transparency in the marine fuel supply chain. It has recommended a process of data collection from bunker suppliers; a process for authorities and inspectors to report non-compliance with Annex VI; regulations to minimise the risk of non-compliant fuels arising from fuel blending activity; enforcement procedures to ensure that ship operators can have a greater degree of confidence in their suppliers; and the collection of data from fuel suppliers, fuel testing companies and shipping companies to identify the root cause of fuel quality problems.

IBIA Chief Executive Peter Hall advised that IBIA would be engaging with shipowners directly at a series of forums around the world held in conjunction with other shipping organisations and associations.  The forums will be disseminating practical advice about fuel quality standards and avoiding problems. The first of these forums takes place 10 March at the International Parcel Tanker Association/Navigate Chemical & Product Tanker conference in London.

Another view of the packed Great Room 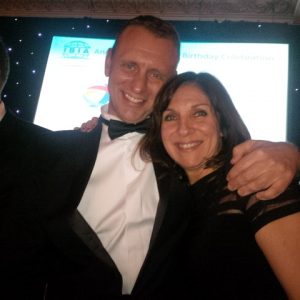 IBIA, which celebrates its 21st anniversary this year, also announced that Michael Green (Intertek), Lim Teck Chen (Hong Lam Shipping) and Unni Einemo (Petromedia Group) would be joining its board of directors with effect from 1 April 2014. Eugena Benavides (Organizacion Terpel) was reappointed whilst Nigel Draffin, John Sterling and Paul Dyke stood down from the board.

About IBIA
The International Bunker Industry Association (IBIA) exists to provide an international forum to address the concerns of all sectors of the international bunker industry; to represent the industry in discussions and negotiations with national and international policy makers, legislators and other groups and bodies; to review, clarify, improve, develop and endorse where appropriate, industry methods, practices and documentation; to increase the professional understanding and competence of all who work in the industry; to provide services and facilities for members and others as the Board shall from time to time consider appropriate.

IBIA champions the continued development of professionals within the bunker industry through its Bunker Courses and its Bunker Cargo Officer qualification.
www.ibia.net

Yet another International honor for HELMEPA