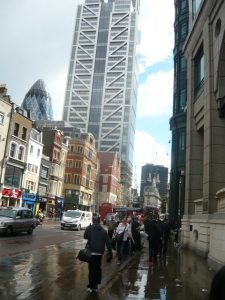 Friday 21 February 2014 – The UK construction sector is seeing its fastest increase in commercial work since August 2007 – a sign that it may finally be out of the doldrums and a positive indicator for underwriters. (source: Lloyd’s of London)

Looking around the City of London over the past five years, one could be forgiven for missing the slump in the UK construction sector. Skyscrapers shooting up around Lloyd’s, including the Shard, 122 Leadenhall Street (nicknamed the Cheese Grater) and 20 Fenchurch Street (dubbed the Walkie-Talkie), have masked the slowdown in construction activity elsewhere.

“The last few years – between 2009 and 2012 – have been pretty grim for the UK construction sector, and it’s been the sector that’s probably been hardest hit in the recession, ” he continues. “Even last year there was a dearth of projects coming through outside of London. We’re now seeing a sense of optimism and an uptick in activity so that’s great news for the insurers as they’re hoping to see more projects flow.”

The Royal Institute of Chartered Surveyors said its members in the construction industry had reported the biggest increase in workloads since the quarterly survey began in 1994.

From a regional perspective, Northern Ireland is leading construction growth with a massive 155% increase in activity in the fourth quarter of 2013 compared to the same quarter in 2012. Within England, the North West saw the biggest change with construction activity up 40% in the final quarter of the year.

The value of non-residential projects in the final quarter of 2013 was 21% higher than a year before, with civil engineering one of the fastest growing sectors, according to the Glenigan Index. It saw underlying project starts increase by 41% year on year during the final quarter due to the equally strong growth in the value of both infrastructure and utilities projects.

With eight months of continuous output growth up until December 2013, it appears the UK construction sector is finally out of the doldrums. The Markit/CIPS UK Construction Purchasing Managers’ Index was down only slightly in December at 62.1, from 62.6 in the previous month, well above the 50.0 value that separates expansion from contraction.

“There’s no doubt there’s an uptick in UK construction and it started off with residential housing but now seems to be commercial building and civil engineering projects as well, so overall there’s a general optimism for the industry and obviously for what’s coming into the insurance market, ” says Colin Rose, head of construction & engineering at Beazley.

The uptick bodes well for the Lloyd’s construction consortium, which launched in May last year. Beazley, Canopius, Hardy and Talbot have pooled their capacity to provide a maximum of up to $166m per risk.

“We’ve probably had in the region of 180 submissions where we’ve been asked as the Construction Consortium at Lloyd’s put up quotations, so that’s been a great response and we’ve offered the market an alternative lead, particularly on the bigger projects with the combined capacity we’ve now have available to us, ” says Rose.

“Overall I think it’s also drawn business into Lloyd’s and the London market as well, ” he continues. “So far premium numbers generated are around £7m to £8m so we’d certainly say it’s a success but there’s a lot more to be done in terms of marketing and making sure everyone is aware of our capabilities.

“We’ve certainly got the underwriting experience across all types of construction projects and the capacity now available to lead the bigger projects so we certainly hope we’ll be given the opportunities, ” he adds. “There’s supposed to be rail investment and other major road and bridge projects, like the Mersey Gateway, so we’re certainly interested in leading those kind of projects as well as large commercial buildings.”

The skyward march of London office towers also looks set to continue. “In London we’ve got the Google building and the Scalpel [52-54 Lime Street] opposite Lloyd’s, which are due to go up, and people are talking again about the Pinnacle [nicknamed the ‘helter skelter’] coming back, so there’s a lot to be optimistic about, ” says Rose. “At Beazley we’ve always been very strong on the four-walled building type projects, the Shard was a project we led, so those kinds of projects are right up our street.”

As a bellwether for the UK economy, the construction uptick gives hope for ongoing economic activity. The International Monetary Fund has raised its growth forecast for the UK economy in 2014 to 2.5% against its previous forecast of 1.9%.

These green shoots appear to have boosted optimism about the outlook for business activity during the year ahead. But there are still plenty of challenges in the construction sector to overcome.

“One potential difficulty we may see in the industry is the squeeze on construction materials, ” says Rose. “As the sector continues to grow and more projects start it will be interesting to see how the materials side of it holds up. It’s been in a slump for a long time and in coming back there will be a demand for materials.”

The inflating cost of labour is another concern, explains Knowles. “When the Olympics construction was at its peak a lot of the heat had been eliminated from the construction market so everything was very keenly priced and the organisers were able to get some good deals out of their contracting partners, which all aided to their ability to deliver within their budgets.

“There’s some concern now about the inflation already coming back into the construction labour market, ” he continues. “There’s already concerns being raised by developers about construction cost inflation driven by the uptick in activity and potential lack of skills now as we appear to be coming out of recession, and that’s likely to put more heat into the market. If rent and yields are not moving in the right direction, it could put a squeeze on developers giving the go-ahead to new development projects.”