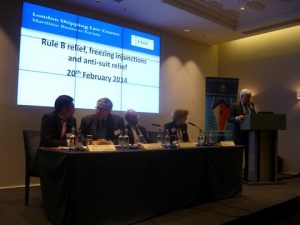 The third edition of ‘Modern Maritime Law, ’ written by Dr. Aleka Mandaraka Sheppard and published by informa law from Routledge, was launched on 20 February. . Developments in the six years, since the second edition was published in 2007, necessitated a substantial revision and restructure of the book, which is now divided into two volumes.

The first volume is devoted to jurisdiction, conflicts and risks, covering arbitration issues, multi-tier dispute resolution clauses and the EU Recast regulation, useful to both shipping and non-shipping lawyers. Freezing injunctions are compared with Rule B attachments. The second volume majors on risk management issues and identifies and explains how those risks are manifest for owners and ship managers generally, including in sale & purchase and shipbuilding contracts. It also provides a solution to the possible implementation of environmental salvage. 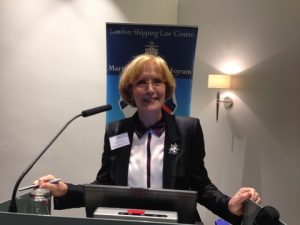 Both volumes include some non-shipping cases of maritime relevance.

Introducing the work at the Institute of Strategic Studies on February 20th, Dr. Sheppard thanked US lawyer Alan Van Praag for his contribution to the book by writing the section on Rule B; Sir Bernard Rix for writing the foreword; and others for their valuable comments, such as: Mans Jacobson, on the pollution chapter; Andrew Mitchell on safety and ISM matters; Sir Bernard Eder and Michael Howard QC on wrongful arrest of ships; 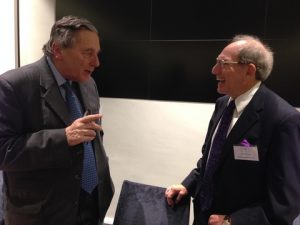 Dr. Sheppard felt the book was a fitting complement to the 20th anniversary of the London Shipping Law Centre Maritime Business Forum. “Since the establishment of the Centre in January 1994, LSLC has become a widely acknowledged centre of excellence in relation not just to maritime law but to the requirements of risk management practices to be applied by shipping professionals. The book and the Centre tackle risk management concepts and introduced education in this area. Shipping professionals are increasingly keen to hear the views of legal and commercial practitioners about the present application and future direction of sensitive areas of maritime law.”

The launch followed a seminar, organised by LSLC, on recent developments in Rule B relief, freezing injunctions and anti-suit relief.

Alan van Praag, a Partner in Eaton & Van Winkle LLP (New York), asserted that maritime attachment proceedings in the United States, conducted under Rule B for Maritime Claims, were thriving. The past year had demonstrated the continuing efficacy of a unique security device. 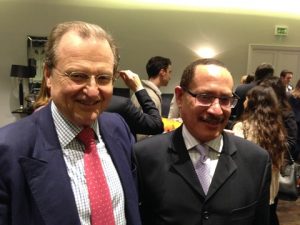 George A. Tsavliris and Gerard Matthews 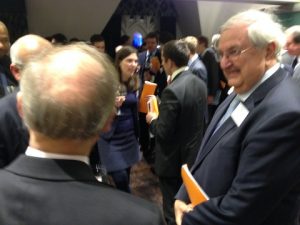 A view from the reception and networking

Ravi Aswani, of Stone Chambers, provided a comprehensive update on Freezing Orders. He cited three cases where the parameters of defendants’ assets, to which claimants sought access, were disputed.

Dr, Sheppard, Arbitrator and LSLC Chairman, tackled trends in anti-suit relief, both within and beyond EU jurisdictions. She felt that some EU commandments and decisions of the European Court of Justice undermined the principle of certainty. She set out the “counter revolution” methods adopted by the English courts to combat the EU revolution on jurisdictional matters; these included the enforcement of an arbitral award as a judgment by the English court prior to the issue of a conflicting decision issued by another court of an EU member state, and the award of damages by arbitrators and the courts for breach of an arbitration agreement.

The seminar was chaired by Lord Justice Christopher Clarke.