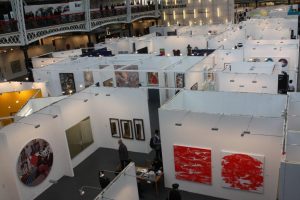 A three-dimensional art work that delivers trenchant condemnation of West Africa’s illegal trade in fuel and of wider corruption throughout the continent drew praise from thousands of visitors to the huge international art fair Art14 London.

The gasoline-can extravaganza by one of Africa’s top contemporary artists, Romuald Hazoumè, was a centrepiece of the show, which extended to every corner of Olympia’s Grand Hall for three days from February 28 2014.

As the sinking-ship-themed installation attracted the crowds, it was clear that Its prominence went a long way to illustrating a leitmotif of the fair: that “the era of domination by the Western art world is all but over.”

The Benin-born artist portrays the shame of the black market trade in oil, but is just as scathing about the destruction of social resources through legal oil extraction. 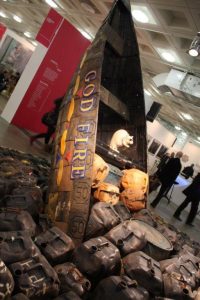 Romuald assembled some 300 empty jerry-cans for his project Rat Singer: Second only to God! Rat Singer is a pun on the name of Cardinal Joseph Ratzinger, now  Pope Emeritus Benedict XVI, although Romuald says that he respects his decision to resign as head of the Roman Catholic church.

The entire scene with capsizing canoe, drowning passengers and impression of water surface, is a satire on the black market petrol trade in Benin. The Rat Singer is a white figure sporting dark glasses – a symbol of corruption – atop supposed suitcases stuffed with dirty money, poised on a barrel of oil. The metaphor is of rats abandoning a sinking ship, and despots who cling to power as their countries plunge deeper into deeper chaos.

A group of yellow-faced ‘bodyguards’ around the Rat Singer are an analogy to white advisors including bankers, foreign investors and mercenaries complicit in manoeuvres sapping vital energy and resources from under-developed countries.

This is the latest in a series of works by Romuald calling attention to the hardships of most people involved in the black market for gasoline, which in the local language is termed kpayo or ‘poor quality.’ The stuff is popular with motorists and motorcyclists because it is cheaper than fuel sold officially.

Thousands of vendors who make a living from selling containers of kpayo have fought efforts by the authorities to stamp out the hazardous system – storing fuel in this way can cause fires, especially deadly when they are kept in houses with flammable roofs.

It is not surprising that local people defend the trade: at least 37% of Benin’s 9.9m people live below the poverty line of $1.25 a day, according to the CIA World Factbook. 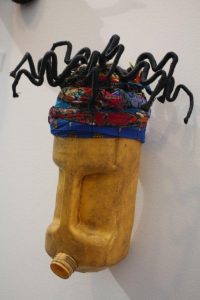 Romuald Hazoumè has travelled widely since he achieved success in the art world, but he is sentimentally attached to the Gulf of Guinea seaport of Porto Novo, where he was born. His “masks” made from jerry cans, and resembling those used in traditional African culture and ceremonies,  were introduced to the UK public in 1992, in the Out of Africa show at the Saatchi Gallery.  Explaining why he uses such canisters, he has said: “I send back to the West that which belongs to them, that is to say, the refuse of consumer society that invades us every day.”

Widely shown in Europe and New York, his work includes La Bouche du Roi, a reworking of a 1789 engraving of the slave ship Brookes.

Published by the Society for Effecting the Abolition of the Slave Trade, the engraving was of slaves crammed into the ship’s lower deck and poop deck. Before the Regulated Slave Trade Act of 1788, which limited a ship like the Brookes to carry 454 African slaves, it had transported up to 609 slaves on each voyage. La Bouche du Roi was exhibited in the UK as part of the centenary remembrance of the Slave Trade Act 1807.

Romuald seeks to expose problems such as the by-products which poison the environment. For instance, cheaply refined black market products release enormous quantities of toxic vapours which people breathe.

He said in an interview in 2012 for October Gallery, which brought his work to Art14, that he wanted to broaden the debate beyond what is happening in Benin. “Today, we exploit the petrol reserves discovered in Africa.  If you go into the Nigerian Delta region, everything you see is conditioned by the obsessive exploitation of vast petroleum reserves.” The groundwater table in those areas had been compromised, with drinking water for local people tainted with heavy hydrocarbons. 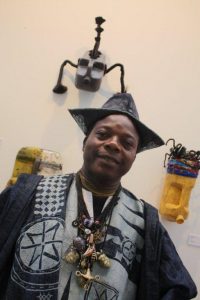 Since pillorying slave ship practices, he has increasingly used photography to address the modern equivalents of slavery, including exploitation via the oil business. Estimates suggest that 90% of all fuel in Benin passes through black-market channels.

The October Gallery in Bloomsbury, which showcases the work of Romuald Hazoumè among others, is directed by Chili Hawes, a Fellow of the Royal Geographical Society. An educationalist, linguist and ecologist, she is a founder of the gallery, which opened in1979.