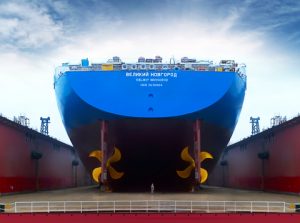 Sovcomflot Wins Marine Money’s ”Deal of the Year” Award for Project Financing of LNG Carriers Construction. Sovcomflot’s USD 316-million project financing transaction has been recognised by the international shipping magazine Marine Money as one of the best financial transactions in 2013 and has received “The Project Financing Deal of the Year” award.

The 10 year non-recourse project facility will finance two ice-class LNG carriers that will operate under long-term charters with Gazprom group. The pairing of Sovcomflot with Gazprom provided one of the best structured and most competitive deals of the year, writes Marine Money. The transaction was very well received by the banking market, with initial oversubscription of more than 2.5 times.

“On the back of Sovcomflot’s reputation and the cash flows from the Gazprom charters, the borrowers obtained highly favorable non-recourse financing with a long tenor and high gearing. The facility, led by ING, is a 10 year post-delivery term loan financing 80 per cent of the contract price of the vessels, which fully covers payment of the delivery installments under the shipbuilding contracts. The repayment profile is 15 years to zero, in line with the committed period of the time charter contracts, resulting in a 33 per cent balloon at the end of the 10 year tenor”.

Nikolai Kolesnikov, Sovcomflot EVP & Chief Financial Officer said, “This is the fourth year in a row that Sovcomflot’s financing transactions have received Marine Money’s “Deal of the Year” awards, each time for a different financial instrument. We are grateful to Marine Money for their high recognition of our latest innovative project financing deal that we put together with our banking partners ING, KfW IPEX-Bank and SMBC.”

The Velikiy Novgorod series of LNG carriers of Atlanticmax type and cargo capacity of 170, 200 m3 are among the top-of-the-range vessels. The first ship already began operations in February 2014, the second LNG carrier, Pskov, will be commissioned in the coming September. These ships are capable of carrying gas all year-round from almost all available LNG terminals across the world, including the Russia’s first LNG terminal in Prigorodnoye (Sakhalin-2 Project, Sakhalin Region) and the upcoming Vladivostok-LNG terminal.

The Dragon has landed in Taiwan