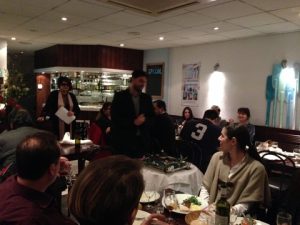 The venue: The Santorini restaurant on Moscow Road at the heart of  Bayswater – the Greek suburb of London for over 200 years!

Over sixty journalists, media and advertising consultants, communication specialists, together with their family and friends enjoyed the excellent food,  wines and popular Greek music. 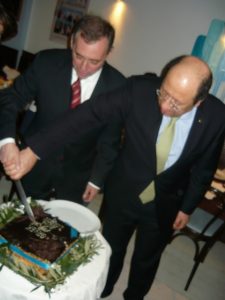 The organisers Thanos Gavos and Isaak Karipides together Martha-Maria Chryssomalis and other members of the fraternity produced the best; a very rare evening of its kind over the last thirty years. The “rituals” by veteran journalist Martha-Maria Chryssomalis who delivered a very sentimental speech, a tour of history, covering her 30 years in London; the raffle was unique – even a gift “from” Yanni (his latest CD) to Yiannis was won…

The lucky winner of the GPA’s sovereign was economist Manos Papatheofanous! 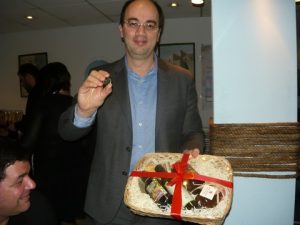 The supporters of the association included Nick Kontarines from Yamas Wines and Noeleen Alexopoulou from the International Diplomatic Supplies  who offered the excellent wines.

Present at the event H.E. the Greek Ambassador Konstantinos Bikas who jointly cut the… chocolate-based …vassilopita with the Cyprus High Commissioner Euripides Euriviades, the Greek Press Attaché George Dardavillas  and all the members of the Greek Embassy’s Press Office, the Commercial Attaché Antonis Katepodis, the Greek Tourist Organisation’s Director Christina Kalogera and her Deputy Dimitra Voziki and over forty journalists.