Naming Ceremony for the “EVER LOYAL” 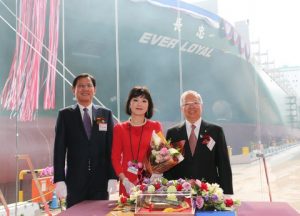 In his speech Mr. Lin said, “The L-type vessels are a major part of our fleet renewal program. The fuel efficient ships have significantly reduced the carbon footprint of our operation. The newbuildings will continue to replace old ships in our fleet and enable Evergreen Line to provide marine transportation service in the most eco-friendly way.”

EVER LOYAL is owned by Evergreen Marine Corp. The new ship is 334.8 meters in length, 45.8 meters wide, with 942 reefer plugs and a draft of 14.2 meters. The vessels can cruise at a speed up to 24.5 knots. After her delivery on 20th March, she will join Evergreen Line’s Far East – Arabian Persian Gulf service, replacing an older vessel.

Evergreen Line commenced its fleet renewal program in 2010 at a time when shipbuilding costs reached cost-effective levels. The project entailed ordering of thirty L-type vessels and chartering a further five 8, 800 teu units as well as ten of 13, 800 teu. Furthermore, in order to meet the tonnage demand of alliance commitments, the carrier has also signed charter agreements for ten 14, 000 teu vessels. The delivery of these newbuildings, scheduled between now and 2017, will be balanced by the redelivery of ships currently on charter when these agreements expire.