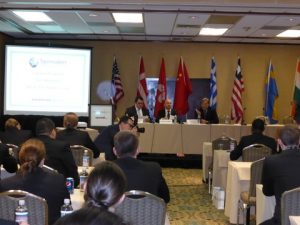 Taking the stage they hosted a vibrant question and answer session where the next generation of shipping could find out as much as possible from these two knowledgeable experts in the maritime sector.

Robert Giorgi welcomed the attendees “I am delighted to be here and for me being involved in the ship management sector, a service company, the most important assets are always the people.”

He went on to give a summary of his career and life both at sea and onshore, talking about his time at naval college, at sea until 1980 when despite loving being at sea he chose to come onshore to Monaco, working for an owner and various onshore positions and having the opportunity in 1984 to be part of the start of V Ships.  “There are moments in life when you have to decide when to change course, you never know if you are right or not but sometimes you have to go with what you feel and just do it.” He said “I have been a cadet like you and I have ended up part of the biggest ship management company in the world which has made me very happy and very proud especially as it has allowed me to interact with young people like you. Shipping is hopefully for you, a career for life.”

Phil Parry, also summarised his career, having got into shipping by accident originally wanting to be a fish farmer but changed courses to train as a maritime lawyer, working for Ince & Co before in 1997 setting up the successful Spinnaker Consulting which specialises in shore based maritime recruitment. “I set up Spinnaker as I ran the Alumni association at my university and found an number of people jobs with the older members of the association and I realised there was no one doing this in shipping at the time. Seventeen years on we recruit for companies all over the world – all types of jobs – anyone who wears a suit and who works in shipping really.”

Opening up the floor for questions, students were asked why they chose shipping. Interestingly the reasons were varied, some had obvious reasons such as families in shipping or lived by ports yet sadly no one had heard of shipping through schools or been encouraged to look at shipping via careers advice.

Lively debate and questions continued, with discussions on when starting a career how easy it is to go down the wrong route. Phil suggested it’s well worthwhile taking the time or even spending a few dollars doing some psychometric / personal profiling to gain an understanding of your own personal characteristics and motivations.  Far too many of us discover our weaknesses too late in life after years of frustration spent trying to fit into jobs we are not cut out for.   Spinnaker is almost uniquely placed to give practical advice – after many years working across the industry they have a good understanding of the personality types, characteristics and backgrounds that the various shipping careers demand.

Many of the young people in the audience coming into shipping were being seduced by thoughts of chartering and ship broking jobs that they are possibly not suitable for.  The majority of students were interested in commercial and operations roles with a small number considering legal, insurance and P&I and a similarly small number contemplating a career at sea before looking for jobs ashore. 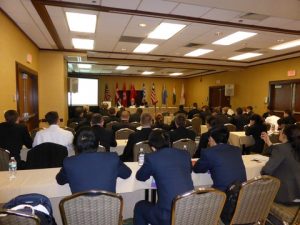 A room packed with the next generation of shipping

Phil and Roberto spent time during the session to explain traditional chartering, the advent of freight trading/operating over the last ten years and how, given this, how operations staff are now more highly valued.   Similarly, they pointed out how hard it is for seafarers to move ashore into broking and chartering.  It’s generally either – or; spend time at sea and focus on a career maybe in ship management or operations, or come ashore very early and/or go straight into a commercial role where the market demands you ‘grow up’ with your peer group around you to form your business network.

Students were obviously keen to know what they could earn in the different roles so they were given a quick run-through of the alternatives …with a careful caveat that it takes time to get there!

Phil Parry said “The session was very rewarding for me and Roberto.  We were very pleased the room was full of uniformed students, who were very polite and respectful, rather than suits.  They were sponges desperate for some practical input! We were glad to help.”