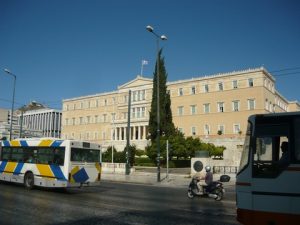 It is 193 years from the Greek Revolt back in 1821 against the Ottoman yoke which was based on the triumph of the Greek sails! The Greek modern heroes of 1821 defended their modern freedom and democracy (in its proper meaning and not that portrayed by the traitors, infidels and the hoi polloi today) alike their ancestors during the Greco-Persian wars at sea! And they triumphed! John Faraclas writes:

The democratic values of a nation betrayed, coupled with the burning willingness for freedom  created a revolution second to none which continues today to inspire many of the world leaders.

Who can forget Aristotle’s “Politics” Book VI, chapter II? Who can forget Thucydides’ “Pericles’ Funeral Orations”? Who can forget Demosthenes’ Oration against Timocrates and the Oath of the Heliasts?”; Who can forget Euripides’ “The Suppliant Women” – verse 400-450? Or Aeschylus’ “The Eumenides” – verse 526-536 and 681-694?

Moreover who can forget the Magna Carta here in England in 1215 or the Bill of Rights 1688? And what about on the other side of the Atlantic “The Declaration of Independence in 1776”?  or the Declaration of the Rights of Man and the Citizen on the 26th of August  1789 in France? 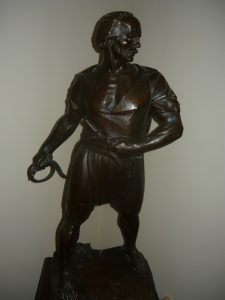 Back to Greece; who can forget the Righas Pheraios’ “The Right of Man” and in particular on the Chapter of “The Constitution”?

For just over 2, 523 years the Greek Democracy and its proper democratic freedoms (values) are the beacon of our society, save the time as well as the people which sometimes spoil it!

Today, 193 years after this revolt, coinciding with the Annunciation of the Mother of God, the Greeks worldwide celebrate in the most unique way the values of Freedom, unfortunately under the biased Austerity of modern tyrants and hope soon their misery ends, otherwise we shall see a modern revolt that never ever before has happened!

It is to his credit, that Barack Obama with his Presidential Proclamation* yestreday — Greek Independence Day: A National Day of Celebration of Greek and American Democracy, 2014, honours this day.

Lastly, last night at the Park Lane Hotel, during the London event of the Greek Shipping Hall of Fame, we’ve heard some interesting points on the importance of Greek Shipping, the sector which liberated Greece back in 1821 and supported the world in two World Wars at the seven oceans and beyond! 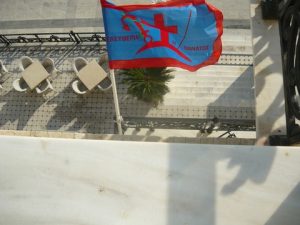 The Spetsiot Revolutionary banner during the War of Greek Independence

CELEBRATION OF GREEK AND AMERICAN DEMOCRACY, 2014

BY THE PRESIDENT OF THE UNITED STATES OF AMERICA

Almost two centuries ago, the people of Greece laid claim to their independence and began a long struggle to restore democracy to its birthplace. Greek Americans crossed oceans to fight for the freedom of their ancestral homeland, and through two World Wars and a Cold War, Greece and the United States stood side-by-side. On Greek Independence Day, we honor the deep connections between our two nations and celebrate the democratic ideals at the heart of our shared history.

America’s form of government owes much to the small group of Greek city-states that pioneered democracy thousands of years ago. Just as Hellenic principles guided our Founders, Greek antiquity has inspired generations, from writers and activists to architects and inventors. Greek Americans have contributed as leaders of culture, community, business, and government. Through the generations, they have helped shape our enduring democracy — a Nation that accepts our obligations to one another and understands that we must rise and fall as one.

Greece is a valued NATO ally, and our friendship remains as strong as ever. As Greece takes tough action to rebuild its economy and bring relief to the Greek people, the United States offers our continued support. Today, let us reaffirm a bond that extends beyond government, connects our peoples, and inspires all who strive to choose their own destiny.

NOW, THEREFORE, I, BARACK OBAMA, President of the United States of America, by virtue of the authority vested in me by the Constitution and the laws of the United States, do hereby proclaim March 25, 2014, as Greek Independence Day: A National Day of Celebration of Greek and American Democracy. I call upon the people of the United States to observe this day with appropriate ceremonies and activities.

IN WITNESS WHEREOF, I have hereunto set my hand this twenty-fourth day of March, in the year of our Lord two thousand fourteen, and of the Independence of the United States of America the two hundred and thirty-eighth. 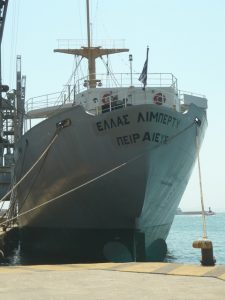