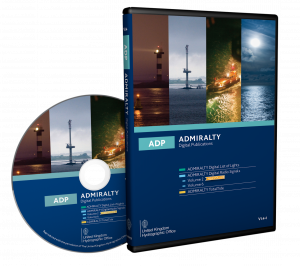 ADMIRALTY Digital Radio Signals volume 2 (ADRS2) is the latest of the UKHO’s world-leading nautical reference guides to be made available in a digital format as part of the UKHO’s ADP portfolio, which is now available as a 3-month free trial for new customers.

In common with the other digital guides within ADP, the digital format of ADRS 2 offers significant advantages to bridge crews, making it far easier to search and consult compared to the paper equivalent. ADRS 2 is quick and simple to use, enabling bridge crews to make faster, better-informed decisions. Updates are provided electronically every week and can be applied in seconds, reducing the risk of human error. All ADP applications, including ADRS 2, can also be viewed as a single layer on top of official navigational charts using ADMIRALTY e-Navigator.

Commenting on the launch of ADRS 2, Josephine Washington, Product Manager (Publications) at the UKHO, said:
“With the launch of ADMIRALTY Digital Radio Signals volume 2, our expanded portfolio of digital publications is even more valuable as a voyage planning and navigational tool for ship owners, ship operators and bridge crews. ADRS 2 contains the same important information as its popular paper equivalent, but is now even better thanks to the benefits that the digital format can offer, including speed and ease of use.

Each of our digital publications, including ADRS 2, is SOLAS-compliant and approved by the Flag States of over three-quarters of ships trading internationally. As the latest figures from the Paris MoU nations show, deficiencies in charts and publications were a significant cause of vessel detentions in 2013. With this in mind, the ADP portfolio not only equips vessels and their crews with the tools they need for safe and efficient navigation, they will also be better placed to demonstrate compliance with Port State Control requirements.”

Further volumes of ADMIRALTY List of Radio Signals, the world’s most comprehensive and authoritative source of information on maritime radio communication, will be added to the UKHO’s digital portfolio in the coming months.

ADP are approved for use by a long list of 76 Flag States, including such leading Flag States as Greece, Liberia, Marshall Islands, Panama and Singapore. As a result, 78% of the world’s vessels over 2, 000 gross tonnes in size are now permitted to use ADP for voyage planning and navigation purposes instead of their paper equivalents.

The launch of ADRS 2 comes as new data is published on the detention rates of the 27 Paris MoU maritime administrations, which cover European coastal waters and the North Atlantic basin from North America to Europe. Every year, over 18, 000 inspections take place on board foreign ships in the Paris MoU ports. Data from last year shows that of the 912 vessels detained in 2013, 11% included deficiencies with either navigational charts or publications.

Existing users of ADP, including those on a free trial, wishing to upgrade to the version including ADRS2 and companies interested in beginning a 3-month free trial of ADP for new customers should contact their local ADMIRALTY Chart Agent, details of which can be found at www.admiralty.co.uk/SitePages/Distributors.aspx.

1. UKHO, an Executive Agency of the Ministry of Defence, has been charting the world’s oceans for more than 200 years with the primary aim of providing navigational products and services for the Royal Navy and merchant mariners to save and protect lives at sea. In addition it serves small craft and leisure mariners and provides a range of consultancy services.
2. UKHO also plays a central role, in support of the Maritime and Coastguard Agency, in discharging the navigation element of the UK’s Safety of Life at Sea Treaty obligations for waters of UK national responsibility.
3. UKHO produces a worldwide series of some 3, 500 paper nautical charts, 200 publications under the ADMIRALTY brand and Electronic Navigational Charts (ENCs). The ADMIRALTY portfolio is sold globally and used by nearly 70% of international shipping.

Women need training to survive and thrive in maritime sector

Nice Blog. Thanks for posting this. We are also in the same fields . For more information visit our website http://bit.ly/17Muz4y.