This fatal accident could have been prevented. Instead it brings the death toll to at least five workers so far this year in Chittagong. The NGO Shipbreaking Platform, a coalition of environmental, human rights and labour rights organisations working for safe and clean ship recycling worldwide, has recorded that at least 23 workers were killed in the Bangladesh shipbreaking yards last year [1].

“This sad accident shows the clear lack of safety measures in the industry, ” says Muhammad Ali Shahin, Bangladesh coordinator of the NGO Shipbreaking Platform. “Shipbreaking workers are not well trained, their work is not supervised and they are either not provided with safety gear or no checks are made to ensure that they are actually able to properly use protective equipment. It is very obvious that nobody feels responsible for these men’s lives.” 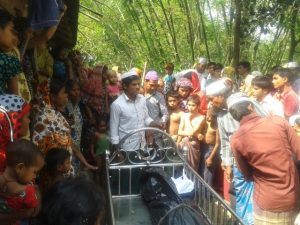 Jashim’s dead body is brought back to his village. Source: NGO Shipbreaking Platform

The fatal accident occurred at the shipbreaking yard of Arafin Enterprise. According to The Daily Star, the country’s largest English-speaking newspaper, the yard claims to have all necessary safety measures in place and to have provided the workers with Personal Protective Equipment (PPE), which the workers then chose not to use [2]. But the father of deceased foreman Jasim told The Daily Star that his son, who was the family’s sole source of income, was never provided with safety gear. Before dying one of the workers had alerted his family and the yard managers of the accident via his mobile phone. The families rushed to the yard, but found the gates locked.

“One of the survivors told me that he could have saved at least two of the workers if the yard had provided them with oxygen. Instead, the yard management wanted to hide the bodies, ” says Muhammad Ali Shahin. “The families, who had been alerted of the accident, finally managed to break the gates of the yard. But it was unfortunately too late to save the workers”.

Shipbreaking workers in South Asia are exposed to toxic fumes on a daily basis, they risk being crushed by a falling steel plate, and are exposed to toxic waste, such as asbestos, that can cause cancer and other fatal diseases many years later. Many deaths go unrecorded as there is no official register of workers.

In January, Tapan Jaladas’ and Md Lalu’s faces were severely burned when an explosion occurred on a Norwegian Teekay owned oil tanker in the Kabir Steel shipbreaking yard. The victims’ co-workers said that the yard operator did not provide sufficient safety gear and that the workers cutting the tanker using blowtorches did not wear fireproof clothes. As in yesterday’s accident, the yard manager claimed that the workers had been provided with PPE, but obviously proper procedures to ensure safe-for-hot-work conditions were not put in place.

Shortly after the explosion in January, 25-year old Babul Das was crushed to death by a falling steel plate in the Siko Steel shipbreaking yard. The former fisherman died while he was dismantling a ship belonging to the company American President Lines (APL). APL is owned by Singapore-based Neptune Orient Lines (NOL), one the world’s major container ship companies.

“We demand that the shipbreaking industry takes measures to prevent accidents and injuries instead of trying to cover them up”, says Patrizia Heidegger, Executive Director of the Brussels-based NGO Shipbreaking Platform. “Whereas yard managers get caught in contradictory statements, some industry representatives even dare to deny the fact that these accidents happen at all. Moreover, we blame the ship owners who sell their vessels to Bangladesh and are not willing to take responsibility for the safe and clean recycling of their ships. These deaths and injuries are the direct result of wanting to make the biggest profit on the sale of their old ships.”