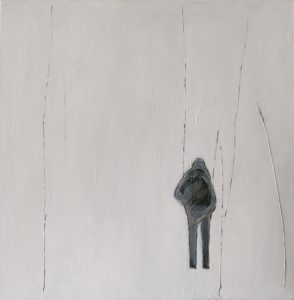 Tulips and a multitude of other spring flowers are blooming in the formal gardens of one of inner London’s largest green spaces, Holland Park, and on glorious display too is the talent of artists and craftspeople associated with the fashionable neighbourhood.

A superb collection of 568 entries from 77 artists on view in the Orangery complements the woodland walks, greenery and playgrounds that are the historic pride of the Royal Borough of Kensington and Chelsea. Small wonder that the first night of the Friends of Holland Park 2014 art exhibition attracted a huge crowd from west London and beyond.

The Orangery, built for the fourth Lord Holland in 1849 and later remodelled, reflects an aristocratic era of Holland Park, which originates in a 500 acre estate, founded in 1591, which once reached almost as far as the Thames. 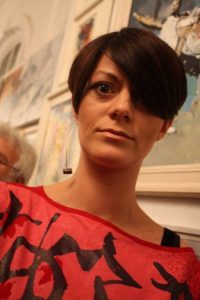 The characterful collection from locally-connected artists, both amateur and professional, strongly impressed the show judge, Isabel Langtry, principal of Hampstead School of Art, not least because it chimed with the School’s aims of fostering “art for everyone.”

Speaking on the balmy private view evening, Ms Langtry praised what she called “some spectacular work, including magnificent pieces in the browsers.” She declared: “There are artists here whom I think have a great future in the art world.”

She announced that a new award, the Hugh Casson Prize for Drawing, was won by Małgorzata Łapsa-Malawska, for her oil painting on canvas entitled Lonely Walk,  part of her Urban Loneliness series. Ms Langtry described the work as “a lovely piece of mark-making with paint.” She presented Ms Łapsa-Malawska with a framed giclée print of a 1985 drawing by the late Sir Hugh Casson of the statue of Lord Holland (Sir Hugh was at one time president of the Friends of Holland Park). 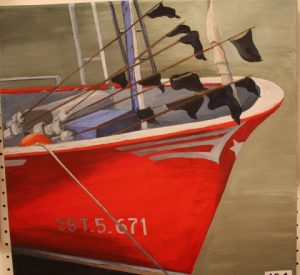 Ms Łapsa-Malawska, born in Przemyśl, Poland, is a member of the Association of Polish Artists in Great Britain. Her motto is: “Simplicity is the ultimate sophistication, ” and she has been acclaimed for her jewellery, lithography and posters shown in London and in Poland. 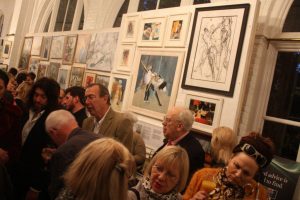 The overall show prize went to Eugenia Killery for her oil painting The Student, a sensitive and intuitive work, said Ms Langtry. Highly commended was Jo Vollers with an oil painting on board,  Trees in the wind, and prize for three-dimensional work went to Neal French for his ceramic resin Girl with Fruit. Ms Langtry said of Norfolk-based Mr French’s bronze sculpture, notably Walking Man, “it reminded me of Rodin.”

Suzanne Bagner was highly commended for her works in glass, including a particularly beautiful piece called Poppy. Ms Langtry, who has been a competition judge at the Holland Park event in several previous years, said: “I have never selected a piece of glass before, but the standard of glass here is fantastic.” 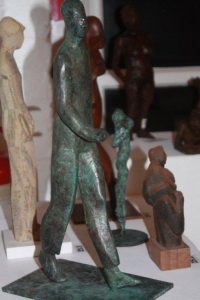 The prize for a work that catches the spirit of Holland Park went to Primrose Braby for an acrylic painting of Winter Trees, seen as “full of grace and light.”

Growing interest in decorative art has been reflected at Hampstead School of Art (a self-funded, non-profit making education charity founded in 1946), said Ms Langtry, with extra classes started in ceramics and sculpture.

Jennie Kettlewell, chairman of the Friends of Holland Park, praised the dedication of Gordon French, the Friends trustee responsible for organising the exhibition, and his wife Sandra and members of their family; and Alison Beckett for her skill in hanging in a coherent way the “jigsaw puzzle” of numerous works within a very short time. 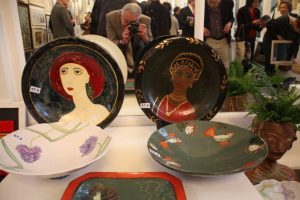 Featured artist at the show is the current president of the Friends, Sir Angus Stirling, who has had senior posts with the Arts Council of Great Britain and the National Trust, and been non-executive chairman of the Royal Opera House, Covent Garden. 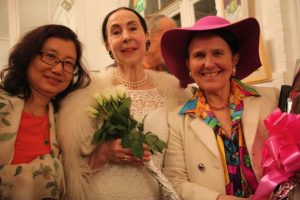 The British smiles. Acrylic on board. By Aude Grasset.

The Friends of Holland Park defines itself as a community association for the conservation and enhancement of the natural and historical assets of the park.

The exhibition, in association with the Royal Borough of Kensington & Chelsea, continues until April 13 2014 at the Orangery, Holland Park, London W8.