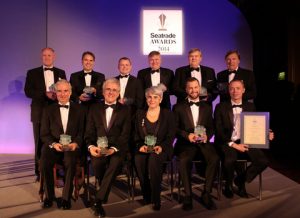 Only hours before the celebration dinner, an independent judging panel of maritime industry leading figures selected the winners for the 26th Seatrade Awards, held this year at London’s Guildhall on the 14 April. The judging panel was chaired by IMO Secretary-General, Koji Sekimizu..

The awards are one of the most respected global maritime recognition schemes and this year the Ceremony Dinner was hosted by International journalist and broadcaster, Justin Webb, in the presence of Her Royal Highness The Princess Royal, together with 400 industry leaders and professionals from around the world.

Her Royal Highness The Princess Royal was the guest of honour and in an opening address thanked Seatrade, in her capacity of President of the Mission to Seafarers, for the constant support that the awards have given around the world.

When appointed as CEO of DNV GL, Dr Madsen made a declaration of intent:  ‘Our goal is to become the world’s leading organisation in safeguarding life, property and the environment’. This has been the guiding principle for his tenure ever since.

Most recently he presided over the company’s merger with another major player in the same field, in what has been the biggest consolidation seen in the sector. Dr Madsen also believes their 150thanniversary has been achieved based on integrity and trust within the organisation.

“I am extremely flattered and humbled to receive this prestigious award – the fact that it is the Seatrade award makes it all the more satisfying” he said.

“Indeed, our vision to make a global impact for a safe and sustainable future remains in place today and will remain so in the future. We all know that the world cannot progress without shipping, and that the shipping industry is expected to become safer, smarter and greener. Our goal is to find solutions that create value and growth for our customers and reduce the strain on the globe.”

Citing the $200m of estimated fuel savings provided per year by UASC’s existing 13, 500 teu ecoships, Stephens said: “The newbuilds are not only among the largest container ships ever ordered, but are also believed to be the first for deepsea trades that have been specified as ‘LNG ready’.

“Indeed, this company has also committed to building its own LNG bunkering station in its home region of the Middle East.”

Under Angeliki Frangou’s leadership since 2005, the Navios Maritime Holdings has grown to comprise six companies, three of which are listed on the New York Stock Exchange, together controlling more than 145 vessels of over 14m dwt.

Originally a dry bulk owner, the Group entered the tanker sector in 2010 and in the last year has acquired container vessels as well. In the past 16 months it has raised $2.5bn in the capital markets and added 50 vessels to its fleet.

Of particular note was the innovative deal it concluded in late 2013 with German shipping bank HSH Nordbank to take over 10 distressed vessels.

With a conservative business model that Frangou describes as combining “a strong balance sheet and common sense, ” the Group celebrated its 60th Anniversary earlier this year.

Frangou responded to the award “It’s very nice to win this Seatrade Personality Award, but I’m just a face to this award. This award belongs to my management team and it is only proper that I thank them and accept the award on their behalf.”

After graduating from the European Business School here in London, he served an apprenticeship with his family’s shipping firm, before taking over the reins from his grandfather in 2003.  At that time the company owned just three ships, which Mr Lauro started augmenting with a fleet of chartered-in tonnage.

But it was after the global economic crisis and subsequent collapse of new ship prices that he made his big move.  A tanker unit was launched with a $150m IPO on the New York Stock Exchange in Spring 2010, and the group embarked on a massive newbuilding spree.

Forays into gas carriers and a bulk shipping have since followed, financed by a series of further New York listings. In all the group has placed orders for some 160 ships worth over $6bn since 2011, making it probably the world’s fastest growing shipping business

Roberto Giorgi, president of V.Ships and a Scorpio board member, accepted the award on his behalf.

The association has been recognised for making a unique contribution to maritime safety and regulation through compliance verification and technical support. Its members issue statutory certificates to ships acting on behalf of governments who are the signatories to such IMO Conventions as SOLAS, MARPOL and Load Line.

Consequently, the association has been uniquely placed for the last 45 years to provide feedback and technical advice to the regulators who attend IMO meetings.

With a goal to address the problem at its core, the Joint Maritime Industry Project was initiated by Shell in 2013 to support capacity building projects in piracy hot spots in Somalia.  The project, which brings together Shell, BP, Maersk, Stena and the Japanese shipping companies NYK, MOL and “K” Line, has pledged a total of $2.5 million to fund the “Alternative Livelihoods to Piracy in Puntland and Central Regions of Somalia Project.” This project aims to strengthen community resilience against piracy through a range of activities intended to stimulate local economic development, support entrepreneurship and create jobs, particularly for vulnerable youth in the areas where piracy is prevalent.

The United Nations Development Programme (UNDP) scoped and is now implementing the project. A recent highlight includes the expansion of the local market in Adado – a busy town in central Somalia – that provides new employment for retailers and improves opportunity for farmers to sell their produce.

Other awards made on the night were:

Koji Sekimizu, Secretary-General, International Maritime Organization (IMO), said in his summary address, “Over the last 27 years, Seatrade Awards have been supported by successive IMO Secretary General’s – C P Srivastava, William O’Neil, Efthimios Mitropoulos and myself. This is an important mechanism for the shipping industry and also for International Maritime Organization. The vision is to raise the profile of international shipping and over that time we have seen significant encouragement and as far as IMO is concerned while I am Secretary General, we will continue to support this very important activity”

His Excellency said, “We at ASRY, as the leading shipyard in the Arabian Gulf, are dedicated to the security and safety of all seafarers. We want to do all that we can to make the seas as safe and secure as possible and hope that our contribution and ongoing support will help to reduce the risks involved in seafaring, and help the delivery of priority activities and projects on maritime search and rescue”.

In keeping with the non-profit making motives of the Seatrade Awards scheme, Seatrade also make a donation from the proceeds to the Royal National Lifeboat Institution (RNLI) and The Mission to Seafarers.

Seatrade Awards: The Seatrade Awards were first launched in 1989 and have developed into one of the most respected and recognised global maritime award schemes, with the logo regarded as a recognised symbol of excellence. The scheme rewards those who have demonstrated innovative solutions for safe, efficient and environmentally friendly shipping and is in keeping with the goals and objectives of the International Maritime Organization.

Seatrade: Established over 40 years ago, Seatrade is a leader in maritime and cruise publications, conferences and exhibitions, training, awards and other special projects.. Regular events include international trade exhibitions and conferences across all maritime sectors, management training courses for shipping professionals, training seminars for travel agents and maritime award schemes, including the prestigious Seatrade Awards held at the Guildhall in London. Seatrade publications include magazines, supplements and yearbooks, whilst daily maritime news is provided online by seatrade-global.com and seatrade-insider.com.