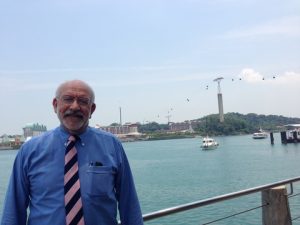 Here is the Allaboutshipping.co.uk’s fifteenth overview and recapitulation of the Shipping Markets, Events and the World’s various “situations” for 2014 with John Faraclas reporting from the Far East, and in particular from Singapore:

It was pretty obvious that the Dry Market was about to fall below the 1, 000 point mark last time round before the Easter Break, confirming once again our prediction, with the BDI  today at 967 points, plus 5 from yesterday, plus 37 since the lowest level so far in 2014, that of 930 points recorded on Thursday the 17th of April (week’s closing as the 18th of April was Good Friday), things get sour for those having second thoughts, i.e: an upward trend with a rally leading to 2/2, 500 points by the end of this Q1/2014; they all spectacularly failed…

The wets too remain in low levels in the region of 690 for the BDTI and 550 for the BCTI. Caution here too despite “prospects”…

The geopolitics and disputes in certain areas which are becoming flash points (Ukraine and its periphery, South China Sea, Japan, The Koreas et al) will bother us and a solution must be found subject there is willingness from both sides. President Obama’s symbolic in my humble view visit in Japan last Wednesday, then on to South Korea, Malaysia and the Philippines does sent the message, but I am afraid things will go soon over the top and become uncontrollable, despite the fact that there is a signed but not binding pact, following the Western Pacific Naval Symposium held in Qingdao, China.

More than 20 countries, including the USA, Japan, the Philippines and South Korea, have signed the pact. This pact more or less outlines how warships should communicate and manoeuvre when they come in contact in busy sea lanes surrounding China, Japan and Southeast Asia. This pact will reduce the possibility of misunderstanding and misjudgement at sea as per Cao Weidong, a researcher at the People’s Liberation Army Naval Military Studies Research Institute. Now add the North Korean attitude in the area with its nuclear ballistics and other games and see what you get. One should remember that territorial disputes are not an easy thing to resolve, particularly given the undisciplined attitude of many nations and the USA has to keep equal distances from all.

Territorial disputes should not become “the game” of the most powerful one; territorial disputes’ legal framework and interpretations so far suggest to me that there is no justice at all! I am certainly provoking those powerful ones and can invite them to a live TV debate here and now.  Ending this para, I guess that patriot Abe, following his Abenomics should look after his Abewarnomics too. China will challenge Japan and others in the region to all intents and purposes and the latest incident with Mitsui OSK Lines paying nearly US$ 30 mio, more or less half of what the court double figure was, tells a lot! The vessel in question here was the Baosteel Emotion a 226, 434 dwt ore carrier built two years ago. On another note, since this “was” settling old scores, despite denials, what next…!

The case involved the loss of two vessels leased from a Chinese company before the two countries went to war back in 1937, and since activists in China are seeking redress from Japan, due to the fact that the case become a cause celebre, what are the Greeks doing down town Athens and Akti Miaouli – the capital of Greece’s super fleet city on reparation issues? If China can do it, Greece and others can do it requesting from Germany and others, war reparations! I urge viewers to carefully study this case which begun back in 1936 when Chung Wei Steamship Co, a Chinese shipping company leased two vessels to a Japanese company that was the predecessor of Mitsui. Discussing the matter further with close friends, there appears to be two schools of thought: one demanding that all nations who harmed others in one way or another pay the bill, or compromise with reality.

The big issue though arises in the case of Greece – an issue that might take the world by surprise if the Greeks go for it! Starting with shipping, this can have devastating effects for the former occupiers of Greece during WWII!  Lastly, if Abe and other Japanese politicians wish to visit the shrine in Tokyo, that’s, with all due respect, their own business.- (full stop and period). Greece and Turkey come to war over the Imia (Greek and international name- Kardak only for Turkey) islets in 1996 and still have tensions with their NATO allies, I mean the Turks. Equally here Obama referred to the islets as Senkaku; the Chinese call them Diaoyu…and this creates frictions despite his carefully calibrated joint statement with Abe…

The Ukrainian saga, following the Crimea case, worsens. Too difficult to stop it now. No peace can be imposed at this stage, and if diplomacy succeeds, behind my Bauta I can win…At present, no sanctions against Russia can bite, sorry, no way. Russia holds the key to the energy supply jargon of Europe and its close periphery, and has warned of repercussions too if its kinsmen suffer… We have warned oyu on hte entire Cimea/Ukraine saga long before – see relevant reporting.

The South Korean Ferry disaster, with heavy casualties amongst the majority of them being students, is yet another issue of what has to be tackled. Too late to start accusing people on who did the errors, all errors. I guess  that we must become serious from the right beginning and not threat the crew, whilst nobody has done the appropriate checks well in advance; shame! This disaster comes at a high time with the Malaysian Airlines “disappeared” plane and the entire region, cannot take anymore.

We  had some piracy incidents too, involving also a Japanese vessel; things look once again sour here. Can we eradicate piracy, or isn’t yet the right time to do it… or doesn’t suit us yet…?

The above and many other events can be heard in our live video herebelow. Have a nice weekend.

Kypraios’ Fishes: Maritime Art and Ecology at its best!