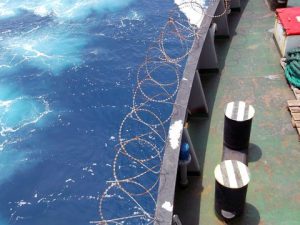 A recommendation of BMP4, and currently the most common piracy deterrent used, razor wire on a ship’s perimeter is a controversial choice.  For the owner it poses a serious conundrum; the need to protect the ship and crew from possible pirate attacks alongside the very real fear of crew suffering a serious injury or infection from handling both new and rusty razor wire. Injury and infection are alarming side effects to any job but add to this the difficult conditions at sea; the weather, the remoteness and the lack of medical facilities and it becomes clear that the use of razor wire poses a huge threat to the wellbeing of crew on-board.

Is this a “hidden” issue? It’s certainly one many ship owner/operators do not want made public. The lack of available statistics on crew injuries suggests a problem far bigger than any of us could imagine. The use of razor wire as an anti-piracy measure is endangering the very lives of the seafarers it is meant to protect; putting them at risk of serious injury and infection. 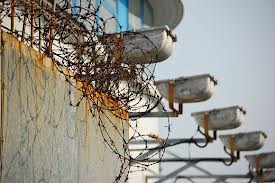 In March 2012 Julian was part of a four man armed protection team on a VLCC transiting the Indian Ocean. In preparation for entering the HRA the team started to put up razor wire around the hull and superstructure of the vessel.

He recalls, “Having performed this activity before, we kitted up in overalls and I had a pair of very heavy duty military razor wire handling gloves. Although the razor wire had been acquired recently it had already started to rust and as always was difficult to handle. The team started to put up razor wire around the hull and superstructure of the vessel. As I was on the starboard superstructure I attached a very large coil to a stanchion but had to cut it; the coils were under tension and sprang back as I cut it and two of the barbs lodged in the artery of my right forearm. I couldn’t remove them and I was starting to bleed quite badly.  I also realised at this point that having a rare blood group and being in a remote location was not conducive to the situation.”

Julian was lucky; the other three members of the protection team were ex-Military, and their first aid skills kicked in immediately. Another member of Julian’s team was also injured by fitting razor wire on the very same trip; highlighting the frequency, and gravity of the incidents. The number of incidents will only continue to increase whilst razor wire is seen as a viable option to protect against the threat of piracy. 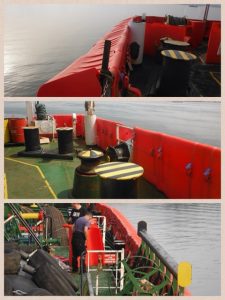 We must ask – how long before it causes a crew fatality?

Certainly the risk of injury and infection is not the only concern here. Alarmingly on some vessels its installation affects the use of life saving equipment – blocking access to life rafts and fire hoses, infringing on the SOLAS (Safety of Life At Sea) convention.

It’s not only the crew that are put at risk by the use of razor wire. In some ports it has to be removed prior to entry, resulting in some vessels discarding the wire into the sea. The environmental implications are obviously huge, as is the cost to keep replacing it.   The  “Economic cost of Somali Piracy, 2011”  paper produced for the Oceans Beyond Piracy programme estimated that over $434 million (USD) was spent on razor wire for vessel hardening purposes in 2011 alone.

Clearly, another passive deterrent to piracy must be found. Guardian Maritime Limited – whose motto is “Safeguarding Seafarers worldwide”- spent a year developing a solution to the problem of unwanted boarding under sail, at anchor or in port. GUARDIAN™ is the first real alternative to razor wire. A ship protection system acting as a highly visible, robust and simple way of making access to ship or rig virtually impossible, GUARDIAN units are quick, simple, safe to install.

Teresa Stevens, owner and designer of GUARDIAN says “The true cost of razor wire lies not in the initial outlay but in the installation and removal, the maintenance and the injuries. GUARDIAN™ is a fit and forget system. It saves thousands of man hours and has reduced injuries by up to 99 % on some vessels.”

Lt Col Julian Carmichael, Director of SPL who are agents for GUARDIAN , wholly endorses its use “The anti-piracy barrier is much more user friendly, very visual so an immediate deterrent, resilient, enduring, ecological and much less aggressive, easy to erect and dismantle.  I cannot see why any company would prefer to use razor wire and accept the continuous and unnecessary risk of injury to those handling it. Seafaring is dangerous enough as it is without employing old fashioned, dangerous and corrosive defensive measures such as razor wire.”