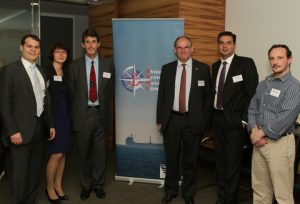 The history of Denholm and the BIMCO story from a shipowners’ perspective,  By Amanda Roberts, Jeanius Consulting

The Shipping Professional Network in London (SPNL) hosted its first event of 2014, sponsored by Norton Rose Fulbright and BIMCO, held at the Norton Rose Fulbright offices in London.  Mr John Denholm (President of BIMCO & Chairman and Chief Executive of J & J Denholm Ltd) and Mr Graeme Brown (External Relations Officer of BIMCO) were keynote speakers at the event, on the topic of “The history of Denholm and the BIMCO story from a shipowners’ perspective.”

Harry Theochari (partner and Global Head of Transport at Norton Rose Fulbright, and Director of Maritime London) opened the evening’s proceedings with a financial insight into the industry. He talked of the startling decrease in spend; with 170 billion US dollars made available to the industry in 2007, compared to 110 billion US dollars in 2012, of which the latter spend saw banks no longer the main supplier of capital. Harry spoke of the challenges this created, both in the industry where there is a need to both maintain and grow, and personally in his own role; but he also spoke of growing financial confidence within the industry today.

Chris Davies being presented his prize by Graeme Brown

The first keynote speaker, John Denholm (President of BIMCO & Chairman and Chief Executive of J & J Denholm Ltd) provided an interesting and informative insight into the history of Denholm.  Founded in 1866 in Greenock by John’s Great Great Uncle James Denholm and in 1869, joined by his young brother John, the name “J & J Denholm” was born, and is in fact still the name of the holding company today.  The business quickly prospered and they became ship agents, purchasing their first ship, The David Sinclair, in 1872 after financial assistance from a consortium. A fleet was soon built up and in 1882 the eleven ships were sold off and replaced with steel steamers.

By 1909 Denholm had 6 shipping companies, all with the Captains as shareholders, which were consolidated into a single company called “The Denholm Line Steamers” which still exists today.

John provided an insight into the “boom and bust” period the company experienced during the Great War and the need to rebuild its fleet after the Second World War, with Denholm forming joint ventures with H Clarkson and shipbuilders. John acknowledged “Thus the ship management business was born; there was no strategic planning.”

John continued by citing 1959 as a big break for Denholm’s when they were handed a fleet of fifteen foreign flagged ships to manage, by Earling Naess. By 1966 Denholm managed 1% of the world’s fleet by deadweight tonnage and continued the focus on ship management through to the 1960s and 70s.

The 1980s saw a conscious move into ship owning, and 1981 saw John join the family business as an Accountant at a time when the company was making record profits, prior to the huge recession of the mid 80s. John recalled “Then it all went horribly wrong. Ship values collapsed, we had to write the value of our fleet down by 3.5 million in 1985 and charter rates fell below break even costs – does this sound familiar!” This proved a double whammy as not only were owners looking to cut operating costs but were also turning to India for cheaper crews.

John recalled the first strategic planning meeting was then held, resulting in the decision to make strategic purchases of majority stakes in companies, resulting in successful acquisitions that today continue to turnover huge operating profits.

So why have Denholm’s survived when so many other great British tramp shipping companies haven’t? John concluded there is an abundance of reasons, from the number of small players in the sector, issues with inheritance tax and over-borrowing, to name just a few. He continued by saying that his belief is, “You must always be in a position where you can buy and never be in a position that you have to sell.”

What does the future hold for Denholm’s? Certainly a reinvestment in ships, with plans to purchase at least one more bulk carrier from Japan.

The second keynote speaker was Graeme Brown from the Baltic and International Maritime Council (BIMCO).

BIMCO was established in 1905, as the “voice of the industry” and its membership includes owners, operators, ship brokers, agents and legal companies.

Graeme explained the benefits that BIMCO membership offers from the wealth of information, services and documentation on the website, to the advisory services. This ‘front office’ service includes specialist advice including legal , development of standard contracts, promotion of fair business practices, industry documentation and education programmes.

Graeme continued, “We provide legal advice and interpretation for our members, help with technical and security issues and have a dedicated person who deals with piracy. Intervention is also a service we offer to members; we have recovered 6 million US dollars of members money in one year alone through debt recovery.”

After the keynote presentations, a Q&A session took place, with a number of SPNL members taking the opportunity to gain further industry insight by addressing John with their questions.

Claudio Chiste, SPNL Chairman from Investec Bank shipping & Marine finance, said members got a lot out of the evening “We are delighted to have secured such high profile speakers that gave members an invaluable insight into the heritage of the industry. We had an exceptional number of members attend tonight and we are already planning and looking forward to our next event on 10th June, with further details to be announced imminently.”

BIMCO kindly donated the raffle prize of an e-learning course, which was won by Chris Davies of Bibby Ship Management.  The rest of the evening was spent networking, with stunning views of the Thames and good food and drink; another hugely successful SPNL event!