The S&P and Freight Markets: Timing for deal 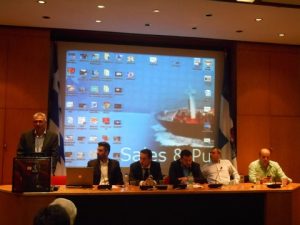 Dimitris I. Diamantidis open the seminar making a reference to how necessary it is for the students to put their academic knowledge in use while they are still studying with aid of internships provided by the collaboration of Universities and shipping firms.

George Venizelos gave an insight on his daily duties as a manager of a dry cargo firm. Mr. Venizelos began his ‘recap’ of the day with publishing the list of all available ships to be negotiated with the brokers. He then stated the importance of the selection of the strategy:1) A more defensive strategy of long-term contracts in order to counter the sudden changes of the Baltic Exchange Dry Bulk Index (BDI) , or 2) A less safe strategy of short term contracts in the hope of a more profitable change in the BDI. Venizelos noted that there are several factors to be taken into account in order to select the best offer for cargo, such as the cyclicality of the economy, as well as environmental factors which should be taken in serious consideration. He later noted the importance of combining several freight contracts geographically in order to minimize the trips with ballast. Afterwards, with the usage of the results of the Baltic Exchange Dry Bulk Index (BDI), you can see if you made the right choices or not.

Alexandros Spondylidis mentioned the several factors to be considered before signing a freight contract and ways to counter the volatility of the market. The fact that long-term freight agreements are minimizing cannot be overlooked, along with the importance of keeping close attention to the movements of the competitors and putting maximum effort to predict their next move. Mr. Spondylidis also stated the importance of minimizing as much as possible the trips with ballast and the importance of the broker reports as well.

Lazaridis’s talk was aimed at the ‘Timing for Deal’ part of the lecture. Firstly, he defined the importance of selecting a strategy to follow. The first strategy described was the ‘asset play’ which focuses on buying when the prices are undervalued and hoping to sell when the prices are overvalued. The second strategy described was the so called ‘Buy and Hold Strategy’ which he claimed that is also preferred by many companies because it is less susceptible to the sudden price changes. He later gave a few examples of how one could have taken advantage of the past market conditions to maximize profit (eg. within 5-6 years a 56% increase of value on several cases of Dry Bulk ships). He later offered his view as being optimistic for the changes in the shipping industry since as he claims ‘opportunities will continue to be present in the second-hand market’.

Constantinos A. Karaindros began his talk by mentioning that even now that funding opportunities are less, Greek shipowners and the Greek shipping are still trusted by the banks. To answer the question ‘When is the best time?’ he stated that there is not such thing, but several factors to be taken into account such as the state of the global markets or the prediction of the next moves of the competitors , as he quoted ‘what shines is not always gold’ . Ending his talk, Mr. Karaindros referred to the future of tradition of Greek shipping  quoting Herodotus’s ‘ Έχουμε γη και πατρίδα, όταν έχουμε πλοία και θάλασσα ‘ meaning ‘We have land and motherland , when we have ships and sea’.

After the presentations, the audience had the opportunity to ask questions to the lecturers. When asked why do shipowners still order new ships in the pessimistic times of the sales and purchase market , Constantinos A. Karaindros noted the ‘gambling side of shipping’ , since the ‘players’ hope/believe that by the time of the delivery the market will be in better condition.

The seminar was concluded with Prof.Costas Chlomoudis of University of Piraeus, announcing that the next lecture will take place on the 6th of May with the title ‘The Role of Accounting Tools (Book Keeping, Auditing, Control , Financial Planning) in the Modern Shipping Firm’ .   Watch this space!