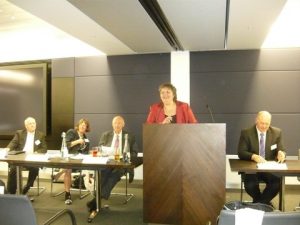 Visible concern: maritime professionals declare at WISTA-UK Grand Debate that the shipping industry must strive harder to overcome its ‘invisibility’

How much recognition is afforded by the public and politicians to the key role of the shipping industry in supplying the goods we consume and wear and keep the power switched on?

Far too little –to the point where there is shocking ignorance of the value of the maritime trades to our daily life.

This was the conclusion of a cross-section of executives from shipping and associated professions and commentators who attended the sixth annual Grand Debate organised by WISTA-UK, a leading national branch of the Women’s International Shipping & Trading Association.

On a show of hands, the meeting clearly carried the motion: This House believes that the shipping industry is invisible. To the rider attached to the motion “if so, whose fault is it?” there were a variety of impassioned answers, with the blame ranging from governments, to industry leaders, to a general failure to co-ordinate and strengthen lobbying and educational efforts.

WISTA-UK is pouring its own resources into its new Came by Ship campaign, developed from its extensive promotional efforts over its four decades of existence.

The May 8 debate, part of WISTA-UK’s 40th anniversary celebrations, and sponsored by major law firm Clyde & Co, featured a panel of two speakers for and two against the proposition.

Opening the discussion, Bridget Hogan, director of publishing and marketing at the Nautical Institute, and secretary of WISTA-UK, contended that shipping was effectively ‘invisible.’ Just look into your fruit bowl at home: how many people stop to think that bananas and other produce had been transported by ship? Even some members of the shipping community might guess that items such as blueberries from Colombia were exported by air, but they would be wrong.

Coverage of the shipping industry in Parliament and in the mainstream press was not about such matters as seafarers’ conditions, but rather about big casualties such as the Costa Concordia and the South Korean ferry tragedy. “Every time, the press has to be educated about what the shipping industry is, ” said Ms Hogan.

Port facilities in recent years had in many cases been transferred to the outskirts of cities, so people were unaware of their importance, except on rare occasions such as when a cruise-ship moored near London Bridge. Part of the industry’s contribution to the balance of payments even went by the term ‘invisible exports.’ “Don’t let’s keep the industry invisible, ” urged the Nautical Institute executive.

Opposing the motion, WISTA-UK president Maria Dixon cited positive references in the media, including the BBC programme The Box, which related how the shipping container ‘changed the world.’

Ms Dixon, founder-director of London-based  ISM Shipping Solutions, said that she grew up in Venezuela, and recalled as a young girl passing the port of La Guaira on Sundays on the way with her family to the beach. The port fence was like chicken wire, so you could see all the activity and the wooden cargo crates. Shipping was clearly visible to everyone, and this planted memories that would inspire her career later on.

Today, ships on order were increasing in size every year, and there was a new cruise industry of affordable holidays. “Shipping is visible all over the place, on the high street, on television, in other media…” Ms Dixon added: “We are very much aware of the threat of piracy: millions of people went to the cinema to watch Captain Phillips.”  The film was based on the 2009 hijacking by Somali pirates of the US-flagged Maersk Alabama.

“Therefore, what young person does not know about shipping?” asked Ms Dixon. “It is very much alive, it is visible, but the general public does not know about all the work we do behind the scenes. It is the opportunities and advantages that are invisible.”

Ewen Macdonald, director of Sea Vision, a not-for-profit initiative to promote awareness of the maritime  business among the 11 to 22 age group in the UK through educational activities, asked whether the industry was invisible, or just camouflaged.

At the beginning of the 20th century, Britain had the largest military navy and the largest commercial fleet in the world, and its shipbuilding output was more than all its competitors elsewhere combined. That was no longer the case, and the container revolution had reduced the huge manpower there used to be in the ports. Without that large community “we have to find other ways of getting that message across. We need to have a government that has a coherent strategy that acknowledges the importance of the contribution of our industry.”

Mr Macdonald continued: “The real threat to everyone here in this room is the ignorance that prevails in tomorrow’s workforce, the rising generation. There is huge competition for tomorrow’s skills, and nearly every one of those [sectors] fishing in the same pool are far more visible than us.”

He said: “If the UK and London are to remain a [maritime] powerhouse, we have a job to do. We are not great at telling our story. Let us start telling other people about it, and attract the skill we need for success.”

Capt Kuba Szymanski, secretary-general of InterManager, the trade association for the shipmanagement industry, insisted: “Yes, we are visible. We just don’t call it shipping.”  He remembered his earlier seafaring career based in Poland, when the UK had lent its support to that country: “This was very visible in Poland. The British government was investing in me!”

He challenged the audience to say how many shipowners there were in the world: 10, 000. How many ships of 500 gross tons and over: 70, 000. How many commercial aeroplanes: 11, 000. Aviation carried much less freight than did shipping.

He agreed with other speakers about the lack of attention paid to seafarers, 54 of whom were still being held hostage by Somali pirates, some of them after three and a half years. By contrast the story of the 33 miners trapped underground for 69 days in Chile in 2011 had huge worldwide attention, “of course rightly so, ” said Capt Szymanski.

“We are extremely visible in Ukraine, Malaysia, India [countries that are big suppliers of labour] and so on, but not in the UK. Maybe we should take best practice from other countries.”

A series of stirring interventions followed from the floor of the meeting with many people calling for the stepping up of information campaigns and of ship visits by the public, and for concerted approaches from the industry as a whole.

Jos Standerwick of Seafarers UK, a charity supporting seafarers in need and their families, called for the industry to make funds available among other endeavours “to get into schools” and tell students of the importance of the shipping industry. “We cannot push forward if we do not get the investment and support from the sector. We need to start opening our cheque books.”

Moderator for the event Jim Davis, chairman of the International Maritime Industries Forum, and a WISTA-UK Ambassador, said that during his 60-year career associated with shipping, the industry had always been under-reported and under-recognised, except when terrible casualties hit the headlines. Shipping was one of the most essential components of the world economic system. The UK imported everything it needed, and it would rapidly grind to a halt if shipping were to close down. Something that was highly efficient – shipping – did not make headlines.

Noting how the labour force had shrunk, Mr Davis compared the 10, 000 dwt cargo ships of the mid-1900s requiring crews of 88, with today’s containerships of considerably larger size operating with just 15 people on board.

Matt Hannaford, a partner at Clyde & Co, and member of the firm’s transportation finance group, where he specialises in commercial shipping law, declared himself and his firm to be keen supporters of WISTA-UK. In addition, the firm had committed sponsorship to the WISTA International conference in Limassol in October 2014 and hopes to send a group of representatives to the Cyprus event.

The WISTA-UK debate was preceded by a video clip prepared by WISTA-UK mentees Holly Edwards and Sam Jude, featuring vox-pop interviews indicating that sections of young people substantially underestimate the relevance of shipping to their daily life.

-WISTA-UK is part of the Women’s International Shipping & Trading Association, an international organisation for women in management positions involved in the maritime transportation business and related trades worldwide. It is a major player in attracting more women to the industry and in supporting women in management positions. With networking, education and mentoring in focus, WISTA seeks to enhance members’ competence and empower career success.

WISTA-UK is the oldest of all the national WISTA associations and was founded in 1974. During 2014 is celebrating its 40th anniversary and they are launching the Came by SHIP campaign to highlight the role that shipping plays in the life of us all.-

Many thanks John for this article.
We would like to invite the readers attending the International Festival for Business in Liverpool to attend our One Day Open Forum. On Monday 16 June,
We have planned a Round Table discussing the undeclared weight in containers, we will have a debate now that in London, everyone voted our industry is invisible, to discuss whose fault is it.
For tickets please visit camebyship.org and get your tickets. There is no cost, and everyone is welcome. Thanks!