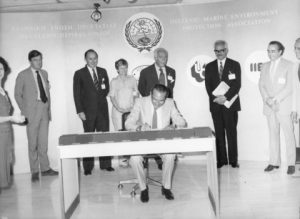 Condolences – It is with great sadness that we in HELMEPA were informed today of the loss of the late Aristomenis M Karageorgis, Honorary Chairman of the Union of Greek Shipowners. As then Chairman of the Union, he cosigned HELMEPA’s Founding Declaration together with the Secretary-General of the Panhellenic Seamen’s Federation on 4 June, 1982.  This voluntary initiative, which he and his colleagues and seafarers undertook in founding HELMEPA, has and continues to both promote the environmental sensitivity of the Greek Shipping Community and enhance the role of the human element in shipping, over the 32 year course of the Association.

The Chairman, Dr John Coustas, the Members of the Board of Directors and all in HELMEPA’s Secretariat, express their sincerest condolences to all his family.

History has a Face

Indeed very sad. He was a great man.
Our thoughts and prayers are with his family and his soul.
Regards, Maria Dixon