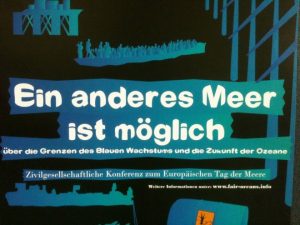 In the run-up to the European Maritime Days, NGOs remind the EU that economic growth cannot trump environmental protection or labour rights

Bremen/Brussels, 19 May 2014 – The NGO Shipbreaking Platform has joined a broad coalition of leading environmental and labour rights organisations such as Greenpeace, WWF, German-based BUND and NABU, and the International Transport Workers Federation (ITF) calling on the EU to address the shortcomings of its Blue Growth Strategy. Adopted in 2012 to create a sustainable marine and maritime economy, the NGOs denounce the Strategy for encouraging large-scale industrial development without protecting marine ecosystems or seafarers’ rights [1].

According to the NGOs, the EU’s Blue Growth Strategy does not tackle the real threats to the world’s ocean and seas, such as the rise of water acidification, marine pollution caused by ships and by land-based waste, plundering of fishing grounds, the dangers of aquaculture, deep-sea mining, oil drilling and exploration, and the disregard for labour rights on ships using flags of convenience. The NGOs invited the public to discuss these critical issues at the Fair Oceans Conference organised in Bremen, Germany in the run-up to the European Maritime Day conference, which is held today and tomorrow. The NGOs are also staging several protests in Bremen and elsewhere.

Every year on 20 May, the European Commission invites thousands of stakeholders to the EU Maritime Day, which has become Europe’s largest conference on maritime policy issues. The NGO Shipbreaking Platform held a workshop at the Fair Oceans Conference to raise awareness of the human cost and the environmental pollution caused by substandard shipbreaking. The Platform also took the opportunity to call upon the European Union to set up a financial incentive based upon the polluter pays principle. Such a system should not discriminate between the flags used by ships and thereby make it less attractive for European ship owners to opt for flags of convenience for the last voyage of their ships.

“It is shameful that most ship owners continue to reject responsibility for their end-of-life vessels, ” said Patrizia Heidegger, Executive Director of the Brussels-based NGO Shipbreaking Platform. “Still too many ship owners prioritise getting the best price for the ship, and ignore the harm done to workers, local communities and the environment. However, we see more and more progressive ship owners refusing to sell their end-of-life ships to substandard beach breaking yards and the EU Ship Recycling Regulation has set a clear standard for safer practices. Sooner or later, safe and clean ship recycling will be unavoidable for all.”

The Platform called on the international community, in particular the IMO and UNEP/Basel Secretariat and ILO, to work together on phasing out the current beaching method in South Asia and help develop modern ship recycling facilities off the beach that guarantee a clean and safe dismantling of all end-of-life vessels. The IMO must also advance on green ship design so that the use of hazardous materials to build ships is stopped and so that they are constructed in a way that allows for clean and safe recycling.

NOTES
[1] Read the press release of the NGO coalition with the position paper: http://bit.ly/1ncU9Bt