Rock and Erotica: paintings and sculptures by Rosie and Violet Casselden, inspired by female band The Courtesans, on show in June at Southfields Gallery, London,  By James Brewer

At their Rock and Erotica exhibition at Southfields Gallery, Wimbledon, from June 10-14 2014, the artists will unveil more than 30 paintings and sculptures Inspired by the earthy stage act.

Line-up of The Courtesans – “we are natural born thrillers” – is Sinead La Bella, Agnes Jones, Saffire Sanchez, and Victoria Brown. “As the name of the group might suggest, these girls perform darkly sensual music in a sultry theatrical setting, ” says Rosie Casselden, who took her cue from the provocative personalities to embark on a series of seductive artworks.

The members of the London electro-rock quartet brand themselves respectively Light, Darkness, Rebel and Temptation. They modelled unabashedly for the Casseldens’ paintings and sculptures and will grace the exhibition with their presence on its ‘party day’,  Saturdaythe 14th. 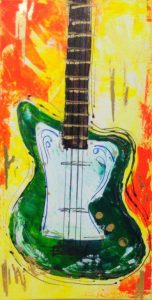 Rosie’s acrylics on canvas, such as La Bella alone, flesh out the mixture of sensuality and drollness that are the trademarks of the group. In the picture, Sinead La Bella (Sin to her friends) has cast off her gown and, comfortable in her readiness to rebel, is at one with a steamy background.

A frontal nude of Sinead, in tones of seductive blue and white, is entitled La Bella Graffiti 2, and has a more innocent and Venus-like quality. In her showbiz bio, Sinead says that she “was known around London as a wild card.”

Another acrylic work,  Untitled,  has an electric guitar very much stage front, and the instrument is vibrantly alive, blazing out an inferno that rocks the joint. The painted page and the musical stave resound as one.

Rosie has been a professional artist and tutor for more than 20 years. Her daughter Violet is a dexterous special effects artist who has fashioned three-dimensional models of various kinds for stage shows and television.

Rosie taught in mainstream schools from 1970 until the early 1990s, when she had a change of career to work as a decorative artist for Interior designers in central London.

“Though, ” she says, “once a teacher; always a teacher.” Sixteen years ago she was persuaded to return to that profession, this time to teach adults. At venues in the southeast she is in constant demand to coach students to produce remarkable work, including arresting landscapes and seascapes in rugged textures. Although she still works occasionally for designers, Rosie concentrates on producing her own pieces for exhibitions and private clients. The last four months preparing for the Rock and Erotica exhibition have been particularly intense.

Two years ago she took part in an International exhibition in Delhi, where she also taught local schoolchildren and ran a workshop for prisoners in the overcrowded Tihar Jail, a complex which according to its official report in December 2012 together with another Delhi facility had 10, 533 inmates compared with the sanctioned capacity of 5, 200. The prison has an emphasis on work and rehabilitation. 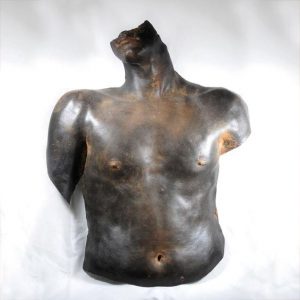 Rosie will return to India this year, working and exhibiting in Delhi and in Chandigarh, the capital of the states of Punjab and Haryana.

Violet studied technical arts and special effects at Wimbledon School of Art. She has produced large scale sculptures cast in fibreglass for performances, as well as small detailed work for clients, with a speciality of portraiture. She is currently working on a TV pilot show being produced in Canada.

Daniel Morrison in his online Hip Rock Magazine (www.danielcurtismorrison.wix.com) edition of October 2013, wrote: “The Courtesans are really the next big thing, I can already tell… delivering some of the sexiest music I’ve ever heard, it’s tough to deny this claim.” 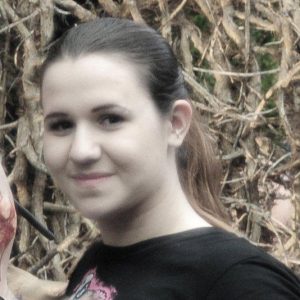 He added: “On their website I was blown away by the marketability of the looks, appeal, direction, personalities and, most importantly, the music! Completely adult themed and comfortably so this is the stuff your bedroom adventures would greatly benefit from!”

The group (www.thecourtesans.org) grabbed initial attention with a version of The Velvet Underground’s Venus in Furs and a short time ago launched their debut album entitled 1917.

Rock and Erotica: paintings and sculptures by Rosie and Violet Casselden is at Southfields Gallery, 223 Wimbledon Park Road, London SW18, from June 10-14 2014.