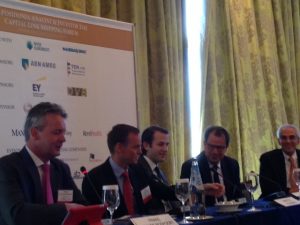 Most positive ocean shipping sector by far is the transport of liquefied natural gas, speakers confirmed during the Capital Link Shipping Forum analyst and investor day coinciding with Posidonia 2014.
Some 400 ships are working in the speciality, and another 100 are on order, which amounts to a one-third increase in terms of capacity.

In the last few years, the sector has grown fourfold to 55m cu m, said Frans van de Bospoort, global head of the tanker group at DVB Bank SE, introducing a panel discussion. Mr van de Boosport asked if 100 newbuildings was “enough” and Tony Lauritzen, chief executive of Dynagas LNG Partners quickly replied: “Going forward, we do not think that is enough.” Based on current gas production, we need many more units, said Mr Lauritzen. “Most of the order book is already dedicated to projects.”

Mr Lauritzen said that of the current fleet, some 130 to 140 vessels were of less than 140, 000 cu m, “which means that they are quite small for the average cargo size.  The average cargo size is probably 145, 000 cu m. Taking that into account, the market looks very robust.”

Richard Gilmore of Maran Gas Maritime, said that a good estimate might be 70 to 80 ships needed. He said that the market should look at what might happen in Japan after the Fukushima disaster which led to government decision to suspend nuclear power, hitting around 30% of the country’s primary energy supply. Japan had weathered that economic shock; at some point companies might put some nuclear capacity back on line, but many other countries were moving ahead and increasing their gas imports.

Simon Crowe of Gaslog Ltd agreed with his fellow panellists, saying: “We see gas as cheap and abundant. The cost and efficiency of moving that gas has got better and better.” The switch from coal to gas continued, and the global population was “set to explode.” He went on: “The emerging economies are increasingly relying on gas. People are thinking of the strategic value of LNG regasification terminals.”

Ships were $200m assets, and “there will be some bumps in the [market] road” with vessels delivered on time and gas projects taking longer to complete, so there was what Mr Crowe called a “very robust outlook with some short term volatility.”

Spot trading or employment contracts — what is the trend? “We see overall gas beng a bigger percentge of the energy mix of each country.” he said. The spot market was likely to increase as a percentage of the trade, but the primary driver would be projects.

Mr Crowe said that the vessels cost a lot of money “so we like to have long-term contracts. Projects costing $20bn, $30bn or $40bn do not want to be reliant on not having a ship available, ” but he did foresee the market opening up more.

Floating storage and offshore regasification is another big talking point. Christos Economou of TMS Cardiff Gas said that the cost of building on land was encouraging offshore developments and his company expected to take part in opportunities created by the latter,  “but it is a bit early and the trade is really small.” Mr Gilmore said the innovation in the business was “great, and it is helping to drive more spot trading and open up markets, but like Mr Economou, “we like the dynamic of the more traditional side at the moment.”
Are the capital markets open currently for LNG ship investment? “Absolutely, ” said Mr Crowe. “People ‘get’ the industry, they ‘get’ the need for gas. They see the long-term nature of this industry — it is not a spot and highly volatile sector. The banking market is there, the bond market is here. Some banks have come back, and new banks are interested.”

Mr Gilmore said that if you have long-term charters behind the assets, “there is money out there right now chasng deals.”

Opportunities across shipping and offshore sectors…