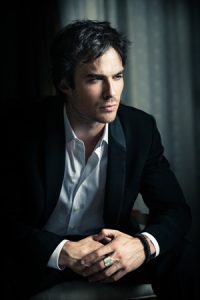 Bridgetown, Barbados, 5 June 2014 – Ian Somerhalder – an actor best known for his work on the Warner Brothers international hit TV Series, “The Vampire Diaries, ” and on the ABC critically acclaimed drama “Lost” – was designated as a United Nations Environment Programme (UNEP) Goodwill Ambassador today in Bridgetown, the capital of the small island nation of Barbados.

Ian is in Bridgetown for the global celebrations of World Environment Day – a UNEP-led initiative that draws individuals the world over together each year for concrete action on a particular environmental theme.

This year, activities around the globe – such as tree plantings, art exhibits, beach clean-ups, conversions to low energy electricity options and more are taking place under the slogan – “Raise Your Voice, Not the Sea Level”, which has spotlighted Small Islands and their unique development challenges and successes. These activities have culminated today here, in Barbados, which is the host of 2014 World Environment Day.

Besides his formal designation as Goodwill Ambassador today, Ian Somerhalder will be taking part in a number of celebrations of the Barbadian culture and environment.

UN Under-Secretary-General and UNEP Executive Director, Achim Steiner said, “Ian Somerhalder is a committed environmentalist who has the capacity to inspire millions of fans worldwide to support conservation and green living.”

“We are proud of Ian Somerhalder’s affiliation with UNEP and we look forward to his active involvement in our initiatives and campaigns. By becoming a Goodwill Ambassador, he will join the ranks of a distinguished group of UNEP supporters, the likes of Gisele Bündchen, Don Cheadle and Yaya Touré, whose work has contributed to raising awareness about the importance of environmental sustainability and green practices worldwide, ” he added.

Part of Ian’s work with UNEP for World Environment Day 2014 is a challenge that he and three other UNEP Goodwill Ambassadors have issued to the world to combat climate change.

Ian, Gisele Bündchen, Don Cheadle and Yaya Touré have sent an SOS to the world on behalf of Small Island Developing States. Their “message in a bottle” is: “We are all connected. The challenges faced by islands will face us all. So, every action we take to reduce waste and mitigate climate change counts. Join one of our teams and pledge to make a difference by taking action for WED.”

Ian is asking his team to “Connect to Go Greener.” His specific call is for communities – including businesses, organizations, schools and individuals – to connect their resources and skills for a more sustainable, resource-efficient way of living.

“Humans are currently consuming far more than our planet can provide or sustain. We are polluting our air with carbon emissions, destroying our forests and species, and filling our seas with plastic and waste, ” he said, adding: “the time is now to go greener by making choices that are good for people and the planet.”

A Louisiana native, Ian represents a new generation of dedicated environmental activists. He says that his childhood in the delicate Gulf Coast ecosystem – and the horrific disaster of Hurricane Katrina – were part of his inspiration to work with UNEP against climate change.

The Ian Somerhalder Foundation makes up a large part of Ian’s philanthropic work. For example, it distributes funds and resources towards global conservation, green energy development/deployment and educational tools, raises awareness on deforestation and supports efforts to end animal cruelty.

Produced by James Cameron, the series sends Ian and other celebrity climate “correspondents, ” including UNEP Goodwill Ambassador Don Cheadle, to report on real-life stories of climate change from around the world.

“When I found out about this series, my heart jumped out of my chest, because I realized – finally – this needs to happen now, ” said Ian. “It is hands-down the most important project I’ve ever been a part of.”

“What scares me the most about climate change is, within 50 years, half of all species on earth will be extinct. We will be experiencing floods and droughts that will prohibit agriculture and fisheries. It’s going to be increasingly difficult for us to get food and water. And within that lies the balance of our very existence, ” he added.

Small Island Developing States around the globe are already bearing the brunt of the impacts of climate change, suffering from rising sea-levels, severe storm surges and declining ecosystems. Although climate change is an enormous challenge, it is also an opportunity to shift to a low-carbon, high-resilience future.

While in Barbados, Ian will narrate a short film that shines light on climate solutions underway around the world. The video, which will be released by the United Nations Climate Change Secretariat’s Momentum for Change initiative in September 2014, aims to inspire others to take similar action.