Industry is warned at Posidonia Namepa seminar of the high cost of non-compliance, By James Brewer

US officials are pressing home a tough line against ships suspected of causing pollution or falsifying their discharge records, a Posidonia seminar was told. Big rewards for whistleblowers are encouraging the trend.

The message was underlined by expert speakers at the event, entitled Compliance, Cost and Competency in America. It is one of a series of seminars put on by the North America Marine Environment Protection Association at key conferences this year.

In particular, the US authorities are cracking down on so-called ‘magic pipe’ offences under which ships use illegal techniques to discharge bilge water.

Since the inception of the vessel pollution initiative 20 years ago, Department of Justice prosecutions have led to more than $300m in fines, and jail sentences totaling 38 years.

Jeanne Grasso, a partner in law firm Blank Rome, said that after two decades of ‘oily water separator’ cases, concerns were ongoing. Almost all of the cases were based on allegations of  false records rather than pollution as such.

It all started with port state control – and since 2008 there had been 87 cases. 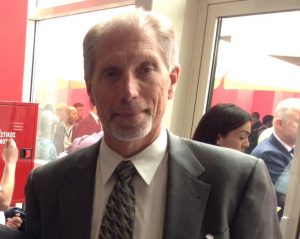 In 2013, port state control in the US carried out 9, 300 ship inspections, resulting in 120 detentions, about 18% of which were related to pollution. Most of the inspections were in New Orleans and Miami, and there was an increasing drive in Corpus Christi, Mobile, Portland and New York.  Ports were becoming more aggressive in this task, said Ms Grasso.

The lesson for ship operators from these instances was that accuracy of reporting, and transparency were most important. The challenge for foreign vessels which traded only occasionally to the US was to have a suitable programme in place ensuring compliance.

Ms Grasso said that under US legislation, whistleblowers could receive one-third of an award in court. Since the 1990s, 102 crew members had been granted more than $17m by courts.  Awards were commonly 20 to 30 times the annual salary of a crew member.

In one current case, lawyers were asking the court to enunciate some standards in relation to whistle-blowing, One person had been recording violations for 10 months, but only reported them formally when he got to the US.

“How do you deal with this?” asked Ms Grasso of the continuing worries. “Training, training, training, and do not forget the oilers and wipers.” She added: “Encourage internal reporting.  Consider rewarding internal reporting. This works to show the company means business. Emphasise the commitment from the highest level in the company. This is not cheap, but I can assure you it is a lot cheaper than getting involved in one of these [court] cases.”

Ms Grasso further warned of the hard line taken by the authorities on marine casualty reporting. This related not just to major casualties but for instance to loss of propulsion or manoeuvrability: “a lot of companies are not reporting that and it is creating significant problems. The Coast Guard recognises the challenges in marine casualty reporting, and has come out with draft guidelines.” She cited a company fined after an employee broke a finger when his hand was trapped in a luggage trolley – the fine was because the company failed to test him for drugs. Separately, a $75, 000 administrative penalty was imposed on a vessel that failed to report a loss of power off Alaska.

Clay Maitland, founding chairman of Namepa, said that the tide of regulation was growing, and the US was at the cutting edge in the fight against spills and pollution.  The international legal structure took shape in the aftermath of the Amoco Cadiz spill in 1979, and the focus on reduction of pollution and education at sea had been one of the great success stories.

Jeffrey Lentz, director of commercial regulations and standards at the US Coast Guard headquarters, said that although the Coast Guard and Environment Protection Agency had the same ballast water management standards, the big difference was that the former grants extensions to ships. The Coast Guard would allow extensions of up to five years if no approved systems were available. Mr Lentz admitted this caused considerable dilemmas for the shipping industry (“I realise this is not very comforting to the industry”), and the organisation had worked hard to try to harmonise the position.

The Coast Guard had so far granted 100 extensions “to many more ships” and these covered up to January 2016.  The extensions were listed on the Coast Guard website. Systems had to be tested by an independent laboratory approved by the Coast Guard. A Coast Guard-approved system should be announced on schedule in 2015. “We are anxious to get type approval.  We are not going to hold off, ” he said.

Mr Lentz dispelled a “myth” that the Coast Guard was changing its implementation dates, ad he said that the organisation was continuing to work with manufacturers.

Changes to the composition of the OBX Index from 20 June