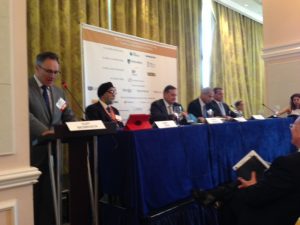 A panel of executives reported on subdued sentiment as they provided an overview of the dry bulk markets, during the Capital Link Shipping Forum analyst and investor day. The full event at the Astir Palace Hotel, Athens, lent wide-ranging insight into all the key sectors in focus for Posidonia week and beyond.

Moderator of the first dry bulk panel session, Gust Biesbroek, global head of ECT transportation at ABN Amro Bank, suggested that there was widespread agreement that a market recovery would last for 18 months.

Polys Hajioannou, chairman and chief executive of Safe Bulkers, assesed that there was already a market recovery. Last year there was a very weak first half and strong second half: “this year is no different.“ Bulk carrier average earnings were $6, 150 in the first half of 2013, and only now (June 2014) were they $14, 300, but that compared with $23, 000 in the second half of last year. The second six months of 2014 might not be as high as the comparable period for 2013, but it would be a lot stronger than current conditions, he forecast.

On the general prognosis, Aristides Pittas, chairman and chief executive of Euroseas, said: “I go with the flow.“ Mr Pittas said that 2015 looked promising judged by the supply and demand fundamentals.  “Further out, it is very bleak.“

Mr Biesbroek remarked that China will continue to be an important driver of conditions, but growth in that country might well continue to reduce. Are we being too optimistic in extrapolating the earlier trend? Spyros Capralos, president and chief executive of Star Bulk Carriers Corp, said that although China was growing at a slower pace, “still, we started from a higher base.“ China would go towards being a more consumer-oriented society, “but they still have a lot of infrastructure projects.“ Although that nation would continue to produce iron ore domestically, it was of low quality and steelmakers would be ready to import because of quality and price.

Amrit Singh, senior shipping analyst at Thomson Reuters, said that the expectations of the Chinese people were rising. “Urbanisation is not something that will stop.“

Mr Capralos said that ordering had come to a halt after a surge in newbuilding prices.  “The new money that has come into the market is not interested to invest in inferior quality vessels, “ but he expected that the newbuilding market would soften, and “the same will happen in secondhand vessels that are also in a softer market.“

Mr Biesbroek asked if the end of the private equity boom was already here, and if there might be some consolidation among shipping companies. Mr Capralos said that it was now more difficult for private equity and other ‘smart money‘ to secure returns “and they are very selective about the partners they choose.“ He added: “I think in future they will be looking for their exit.“

Mr Hajioannou recognised though that “private equity is part of our industry from now on.  We will have to live with it.“ As to any question of a disciplined approach from the shipping side, “it is very tough to convince 700 Greek shipowners… to agree not to order ships. The shipyards have to decrease their capacity. Then prices will go up and they will make more profits. Private equity – if the market repeats the second half [performance] of last year – they will come back. There are many shipowners in Greece to listen to them.“

Mr Pittas:  “we will see a little bit of a consolidation, but it is not going to be large-scale.“  Individuals want to run companies their own way, and Mr Capralos commented: “The ego issue is very important, but in the public markets it is different – you are required to have a bigger fleet and bigger market capitalisation.“ 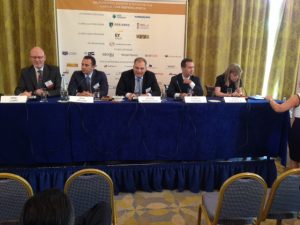 Mrs Fotini Karamnlis, chief executive of Hellenic Carriers, forecast a gradual strengthening of the market going into 2015. There had been many seasonal reasons why the market had disappointed in the first half of 2014. “I think the summer [2014] is not going to be exciting, but we should compare the numbers to last year, and that gives you an idea of how things are better.“ For the first four months of 2014, the Baltic Dry Index averaged 1, 080 – it was much lower last year for the same period, “so this year’s lows are comparable to last year’s highs.“

Stamatis Tsantanis, chairman and chief executive, Seanergy Maritime Holdings, expected that “in the second half of the year we shall see significant increases in the market. “Most of the brokers believe that if the market has not recovered in the second half of the year, the market will panic. They just hope that people will hold their positions and not offer lower rates to the charterers.“

Mrs Karamanlis urged people not to rely on the formal orderbook statistics, which appeared to show fleet growth of 20%. If you deducted orders placed between 2007 and 2010 which had yet to be consummated, the figure reduced to 16.2%. Deduct orders pre-2011, and the fleet advance moderated to 15.6%. New orders in 2014 were mainly placed in the first two months, when there was still expectation of a strong year. “The newbuilding departments of the big broking shops are not very busy, “ she remarked.

Members of the panel were asked whether the time was right to contract new dry bulk tonnage. John Dragnis, chief executive of Goldenport Holdings, said he would not order, “but there are plenty of resales out there.“ There was general agreement from George Karageorgiou, president and chief executive of Globus Maritime.

Moderator for the second session was Nigel Lowry, Athens Correspondent of Lloyd’s List.