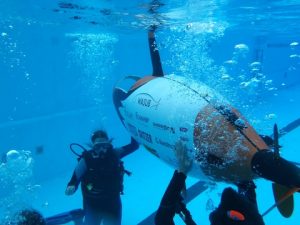 IMarEST celebrates National Women in Engineering Day ahead of international submarine races event
With over a hundred young people from eleven universities from six countries on three continents taking part in the European International Submarine Races (QinetiQ’s Ocean Basin at Gosport, UK, 7 -11 July), the organisers are celebrating National Women in Engineering Day 2014 (23 June) by highlighting the strength of involvement of women in the teams.

“Twenty percent of the participants are women, and we celebrate the complete equality of roles in the teams, ” says Race Director, Prof William Megill, FIMarEST. “Some will have taken a very active role in the design of their submarine, which will be racing against the clock fully submerged with the pilot in SCUBA gear pedalling round a gruelling slalom course, some will act as the pilot, others will play pivotal roles in the event. Indeed, three of the teams (Delft, Rhine-Waal and Plymouth) are led by women engineers, and the University of Washington team is led underwater by a woman divemaster.

Whether from home or overseas they have one factor in common, all are coming to enjoy competing against each other in a unique sporting and engineering challenge in Europe’s biggest covered fresh water space.

“Perhaps the view of Talia Sherrard from the Southampton University team with their sub ROGER (Running On Green Energy Research) best sums up their attitudes, she says: ‘I am really excited to be part of the Southampton team competing in the eISR. We have a great group from a diverse range of backgrounds and research areas that I can’t wait to see what such a multidisciplinary team can produce! We are all enthusiastic and looking forward to this fun new challenge ahead.’

“I am sure that the women in all the other teams would thoroughly agree, and we look forward to meeting them in just a couple of weeks’ time in Gosport.”

Women are also represented on the races’ expert judging panel. Liz Whitrow, a naval architect with BMT since 1996, and now a Programme Manager for the Canadian Victoria Class submarines, reprises her role again this year as a member of the five-member panel, headed by Vice Admiral Sir Robert Hill. Liz has gained a breadth of experience on both surface ships and submarines, transferring lessons from in-service submarine support into shaping new design programmes in the UK, as Manager of the Submarine Team and part of combined industry team assessing the UK future submarine requirements. Liz brings her knowledge and experience of the complex technical challenges facing submarine design to her role in managing complex programmes. In 2013 Liz moved from BMT Defence Services in Bath, UK, to BMT Fleet Technology in Ottawa, Canada, where her combined skills of programme management and experienced submarine designer are underpinning her role as Programme Manager for upgrading the External Communications System on the Victoria Class Submarine, as BMT supports Babcock Canada to deliver the Victoria Class In-Service Support Contract.

“And it doesn’t end there, ” adds Prof Megill. “Our student-led video reporting team is all women.”

Open Day at eISR
On Wednesday 9 July, the eISR plays host to a Graduate Fair and series of Master Classes, which are open to all, with a stimulating range of speakers including Huw James, the adventurer, astronomer and outdoors enthusiast, who will wrap up the day; and the evening before will see an IMarEST Stanley Gray Lecture on autonomous underwater vehicles take place to coincide with one of the eISR networking events. Admission to the Open Day is free of charge to all, but registration at www.subrace.eu/careers-fair is imperative. To register for the IMarEST Stanley Gray Lecture, which is also free to attend, please email events@imarest.org.

Further information is at www.subrace.eu

Intending joining us at the eISR, you are very welcome on Wednesday 9 July (open day plus racing), or Thursday 10 July. You will need to register; and if you are a film or stills cameraman/woman you will need to fill in a form with full details of your camera(s) – just email judithpatten@jppr.uk.com to receive the form with speed!
Rather than carry a long description of the races, can we urge you to click here http://www.subrace.eu/ and scroll down to the marvellous BBC News video on the site. In under three minutes that will give you a splendid insight into the inaugural races and what it meant to the students who took part.
We are happy to put you in touch with the University of your choice – just email judithpatten@jppr.uk.com